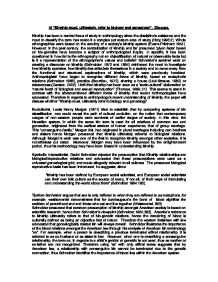 4) "Kinship must, ultimately, refer to biology and genealogy". Discuss. Kinship has been a central focus of study in anthropology since the discipline's existence and the need to classify the term has made it a complex yet mature area of study (Holy,1996;2). Whole ethnographies were based on the scrutiny of a society's kinship system (Evans-Pritchard 1951). However, in the past century, the centralization of kinship and its' presumed 'given facts' based on bio-genetics have become a subject of anthropological inquiry. In specific, it has been questioned in how far is the ethnography not an objectification of natural or observable facts but is it a representation of the ethnographer's values and beliefs? Schneider's seminal work on creating a discourse on kinship (Schneider, 1972 and 1984) reinforced the need to investigate how kinship operates, how kinship ties articulate themselves in a society and to move away from the functional and structural explanations of kinship, which were previously heralded. Anthropologists' have began to recognize different forms of kinship, based on metaphoric relations (Schneider 1968), practice (Bourdieu, 1972), sharing a house (L�vi-Strauss, 1982) or relatedness (Carsten, 2000). Until then kinship had been seen as a "socio-cultural" elaboration on 'natural facts' of biological and sexual reproduction" (Thomas, 1999;.21). This seems to stand in contrast with the aforementioned different forms of kinship that recent Anthropologists have advocated. Therefore in regards to anthropology's recent understanding of kinship, the paper will discuss whether "Kinship must, ultimately refer to biology and genealogy". Evolutionist, Lewis Henry Morgan (1871) tried to establish that by comparing systems of kin classification, one could reveal the path of cultural evolution, on the notion that contemporary usages of non-western people were survivals of earlier stages of society. In this view, the Hawaiian system, in which the same kin term is used for all relatives of common sex and generation, originated from the earliest stratum of human experience, that of group marriage. ...read more.

The performative act of caring supersedes the "natural" kinship ties, because the foster parents, also called yang mother/father, create descent through 'yang' (Stafford,2000;42). Therefore anyone who provides yang can become a relative. Conversely a failure of providing 'yang' can cause termination of relations of descent. Thus Stafford concludes that "in China, as elsewhere, people make kinship" (Stafford, 2000;52). Therefore the cultural act is what determines the relationship in kinship. This performing of kinship is epitomised by a traditional Chinese custom, a spiritual marriage. If, for instance the only son in a family dies young, his spirit may be married to a woman, who then moves in with his family and adopts a child which will continue the lineage.1 Although a very uncommon practice, it depicts the incorporation of substance becoming related to cultural kinship. The performance is based on the relationship between a dead spouse, who spiritually procreates with his wife in order to sustain a lineage. This is similar to Nuer 'ghost marriage', in which the widow remains married to her dead husband and, after his death, can continue to perform her reproductive obligations to her lineage by bearing him children through having sexual intercourse with a stranger or by one of his brothers. Nevertheless, both Stafford's study and Evans-Pritchard studies illustrate the centrality and the importance of procreation in kinship, even though it is on a pretense term. However, Thomas (1999;27) advocates that for Temanambrando's, procreation is not considered as important in determining what is ultimately a kinship relationship, therefore the subject should not be given as much emphasis. Instead the per formative father is regarded as more pretigiuos. Fatherhood is established through the marriage ritual. The rite of 'fafy', a sacrifice of a zebu, gives the man the rite as performing as the child's legitimate father of the woman's children, regardless whether he is the biological genitor (Thomas, 1999;34). What might be interpreted as an adoption, might not carry all the notions of adoption in Western societies, the child attains the father's ancestry, or name. ...read more.

This opposition derives from the question what an anthropologist wants to do, go out, study and compare different cultures or study a culture according to and within its own rules and cosmology. In this discussion on kinship based on being or doing the clearest observation is the shift from structure to practice to discourse on the matter (Carsten, 2000, p.2). Schneider's theory of how ethnocentric views of kinship and the centralization of procreation are imposed is demonstrated through Mary Weismantel's study of "Making Kin" in Zambagua. For they feel that the biological relationship imposed on them is a set of beliefs imposed on them (Weismental ;670) Additionally, whilst watching a Zumbaguan feeding an orphanage, A Nurse implied that it is best to disillusion the boy in thinking the Zumbaguan is the real father, by this she meant real in terms of biological. However, the Zumbaguan replied, "I am going to be his real father, "aren't I feeding hi, right now? Therefore from the Zumbaguans perception, he saw the act of feeding as a characteristic of fatherhood, therefore the genetic relationship between the two did not matter, therefore kinship relations for zumbaguans, 'real' fatherhood is established through nurturing terms. However, this should not be understood in terms of symbolic interactionnist as Iza said I am going to be his father did not say that through one act of feeding he is the boy's father, therefore to assume that a ritualistic act can determine whether kinship relations are seen as establishing a concrete kinship relation is misleading. " The physical act opf intercourse, pregnancy and brith can estbalsih as strong bond between two adults and a child. But other adults, by taking a child into their family and nurturing it's physical needs through the same substances as those eaten bny the rest of the social group, can make of that child a son or a daughter is physically as well as jurally their own" (Wiesmental; 695) This shows that kinship cannot be sole interpretd in terms of biology or neither in terms of cultural as the two are interrelated and rather compliment each other. ...read more.