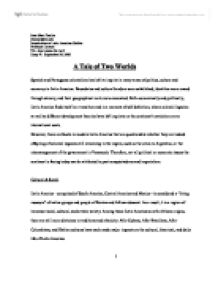 Jean-Marc Freuler [email protected] Introduction to Latin American Studies Professor Lawson TA: Ana Lorena De La O Essay #1 September 29, 2003 A Tale of Two Worlds Spanish and Portuguese colonialism has left its imprint in many areas of politics, culture and economy in Latin America. Boundaries and cultural borders were established, identities were erased through slavery, and their geographical roots were excavated. Both economically and politically, Latin America finds itself in a transition and in a moment of self definition, where colonial legacies as well as different development theories have left imprints on the continent's evolution on an international scale. However, there are facets in modern Latin America that are questionable whether they are indeed offspring of colonial legacies still remaining in the region, such as the crisis in Argentina, or the mismanagement of the government in Venezuela. Therefore, not all political or economic issues the continent is facing today can be attributed to past conquistadores and imperialism. Cultural & Social Latin America - comprised of South America, Central America and Mexico--is considered a "living museum" of native groups and people of Iberian and African descent. As a result, it is a region of immense racial, cultural, and artistic variety. Among those Latin Americans with African origins, there are still more divisions in traditions and ethnicity. Afro-Cubans, Afro-Brazilians, Afro-Colombians, and Haitian cultures have each made major impacts on the cultural, historical, and daily life of Latin America. The survival and change of African customs in the Americas has been one of the "New World's" main historical topics at present day. To appreciate the vital role that African populace has played in opposing the ethnically and economically abusive institutions of slavery, colonialism, and neo-colonial endeavor for more than four hundred years, we must explore the affluent historical and cultural legacies of African natives in New World regions. In Latin America, we perceive that they have preserved and sustained independent cultural customs, histories and aesthetics as well as created and formed new and creolized cultures all over this ample geographic region. ...read more.

3 These include teaching literacy and basic health care, setting curses, and like Clara, refusing to speak. Political & Economic Throughout much of Latin America, the economic, social and political legacies of colonialism still menace the hopes of people struggling to guarantee their welfare and to resolve their future. Widespread poverty and inequality within these countries have aroused many questions about possible development theories that could help them on its feet. Pendulum swings between democracy and dictatorship in the region have triggered macroeconomic instabilities, such as inflation, economic crises and tremendous income inequalities. What is the possible origin of this underdeveloped state of economy? Why haven't Latin American countries yet been able to break through and make the leap towards developed and modern nation states? Modernization theory argues that traditional values and institutions that originated in the Iberian colonization of the regions in the sixteenth century blocked efforts toward economic and sociopolitical development. They singled out in particular the behavior of Catholicism, of the large Indian populations, and of the aristocratic landed elite as detrimental to development in the region. 4 This becomes evident in Garcia Marquez' political messages exposed in "Big Mama's funeral". To illustrate this with an example, we can recall Big Mama's three hour dictation of her material inheritance but also her ethereal ownerships that solemnly satire despotism. Mama's intangible possessions and the sigh at the end of her enumeration create a tension and anticipation throughout the story as it is implied that Mama was a stifling, iron-fisted aristocrat. The breath of fresh air breathed by Macondo at the end of the story and the rush of pure wind blowing through its streets implies the end of a seemingly endless era in the corrupt and credulous realm of Macondo. Just as Esteban Trueba in the "House of the Spirits", Big Mama becomes an emblem of the aristocratic, feudalistic form of political power, which Seymour Martin Lipset argued to be responsible for the lack of entrepreneurial ethic nowadays. ...read more.

13 The transition from colonial legacies to such economic and political mismanagement often based on a corrupt government, can be explained from the fact that although Bol�var, O'Higgins, San Mart�n and Sucre among others liberators, fought courageously to free their nations from Spanish and Portuguese colonial rule, they did not put much emphasis on establishing a solid and stable government afterwards. In the course of history, Latin America was confronted with "Founding Generals" rather than "Founding Fathers". The consequence is that the continent today lacks the institutions and the morals of a true democracy in the service of freedom devoid of corruption. That might be a possible explanation on why development in this continent is so shaky and so delicate. Another example we can draw upon would be Argentina, whose economy has not grown for more than four years. The country is struggling with its worst ever crisis involving both financial chaos and violent street protests. Part of the country's crisis was attributed to corruption and mismanagement of the economy rather than colonial legacies people argue to shape the region. These examples, amongst many other similar cases in Latin America, show that colonial legacies do not play a role any longer in determining a country's economic and political current situation and future development. Rather than blaming past conquistadores, alternative solutions have to be laid on the table in order to get the continent back on its feet. All of the above-mentioned economic- and political instabilities and the never-ending cycle of violence that perpetuated itself from generation to generation throughout the continent become again evident in the "House of the Spirits": Alba finally manages to break this permanent cycle in the doghouse with the help of her mother Blanca, thus creating a new beginning for her daughter. Metaphorically, this serves as a beautiful example and forms a preliminary step toward breaking the vicious circle of hate and revenge thus setting the milestone for a possible new phase in Latin America - both economically, politically and culturally. ...read more.