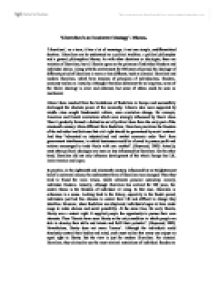 'Liberalism is an incoherent ideology'. Discuss.

'Liberalism is an incoherent ideology'. Discuss. 'Liberalism', as a term, it has a lot of meanings, it not one simple, undifferentiated doctrine. Liberalism can be understood as a political tradition, a political philosophy and a general philosophical theory. As with other doctrines or ideologies, there are varieties of liberalism, but all liberals agree on the primacy of individual freedom and individual choice. Along with the evolvement for 300 years of period, the ideology of different period of liberalism is more or less different, such as classical liberalism and modern liberalism, which have tensions of principles of individualism, freedom, economy and so on. Actually, although it has been dominant for so long time, some of the liberal ideology is clear and coherent, but some of others could be seen as incoherent. Liberal ideas resulted from the breakdown of feudalism in Europe and successfully challenged the absolute power of the monarchy. Liberals who were supported by middle class sought fundamental reform, even revolution change, for example, American and French revolutions which were strongly influenced by liberal ideas. Then it gradually formed a distinctive set of political ideas from the early part of the nineteenth century. More different from feudalism, liberalism proclaims the freedom of the individual and believes that civil right should be guaranteed by social contract. And they "advocated an industrialized and market economic order 'free' from government interference, in which businesses would be allowed to pursue profit and nations encouraged to trade freely with one another". ...read more.

Its ideas were related to the further development of industrialization. Although the main point of these two groups of liberalism is the same of individual freedom, the particular of the principles are more or less different. The individual is 'at the heart of classical liberalism and the purpose of politics is to enable individuals to develop their talents and abilities so that they can maximise their own happiness'. (Roberts. 1997) It means that classical liberals subscribe to egoistical individualism. According to C.B. Macpherson, classical liberalism was 'possessive individualism' and regarded the individual as 'the proprietor of his own person or capacities, owing nothing to society for them'. (Heywood, 2003) And the essence of classical liberalism is the belief that individual rights should be protected by maximising freedom of choice and by limiting the powers of government. In other words, 'it represents a rejection of the absolute powers of a monarch or other ruler and seeks to establish limited government, tolerance and freedom under the law'. (Budge, 2001) But according Isaiah Berlin this theory of liberty was called a 'negative' one. This concept of liberty is 'negative' in that it is based upon the absence of external coercions or restrictions to individual. However, for John Stuart Mill, whose ideas provided a bridge between classical and modern liberalism, He concerned with personal self-development. ...read more.