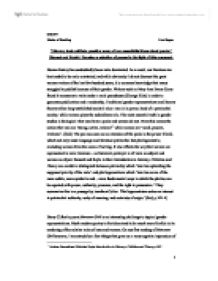 'Literary texts call into question many of our essentialist ideas about gender' (Bennet and Royle). Examine a selection of poems in the light of this comment.

0401077 Modes of Reading Lisa Regan 'Literary texts call into question many of our essentialist ideas about gender' (Bennet and Royle). Examine a selection of poems in the light of this comment. Human history has undoubtedly been male dominated. As a result, our literature too has tended to be male orientated, and while obviously I do not discount the great women writers of the last few hundred years, it is common knowledge that many struggled to publish because of their gender. Writers such as Mary Ann Evans Cross found it necessary to write under a male pseudonym (George Eliot) in order to guarantee publication and a readership. Traditional gender representations and literary theory reflect long-established societal roles: man is in power, head of a patriarchal society, while woman plays the subordinate role. The most essential truth in gender studies is biological: that men have a penis and women do not. From this comes the notion that men are 'strong, active, rational'1 while women are 'weak, passive, irrational'. (ibid.) The pen was seen as an extension of the penis in the power it held, which not only made language and literature patriarchal but phallogocentric, excluding women from the arena of writing. It also affects the way that women are represented in male literature - an historical portrayal is of male as subject and woman as object. Bennett and Royle in their Introduction to Literary, Criticism and Theory are careful to distinguish between patriarchy which 'involves upholding the supposed priority of the male' and phallogocentrism which 'involves some of the more subtle, more symbolic and...more fundamental ways in which the phallus can be equated with power, authority, presence, and the right to possession.' They summarize this in a passage by Jonathon Culler: 'Phallogocentrism unites an interest in patriarchal authority, unity of meaning, and certainty of origin.'(ibid, p.143-4) Harry Clifton's poem Monsoon Girl is an interesting challenge to typical gender representations. ...read more.

Lines 18-22 This bond is sacred, and the all-encompassing feeling that this officer has is much closer to that of a mother than of a father. The 'uplooking' of the men paints a picture 0401077 Modes of Reading Lisa Regan in my mind of children looking up at the mother figure. This poem also contains a homo-erotic element whereby when the poet imagines his man lying on the wire 'And first his lips The worms will eat It is not thus I would have him kiss'd But with the warm passionate lips Of his comrade here.' Lines 51-55 Again this is common of war imagery, and is reminiscent of the type of relationship encouraged between men in the Greek and Roman armies. On the other hand, most essentialist ideas about gender in more modern, western literary theory have taken heterosexuality to be their standard, so applying this would suggest yet another change of attitude portrayed in men's writing, brought about by the conditions of warfare. Biological metaphors are frequently used to describe art and its creation. But their interpretation differs widely depending on the gender of the writer, and they often serve to highlight differences between men and women, not to reconcile the two. The poem I am looking at is The Author to her Book by Anne Bradstreet, which makes use of the childbirth metaphor. Susan Stanford Friedman in her essay Creativity and the Childbirth Metaphor shows how 'linguistically inscribed separations echo religious ones, which in turn resonate through the childbirth metaphor. God's punishment of Adam and Eve...has provided divine authority for the sexual division of labor. Adam's labor is to produce the goods of society by the "sweat of his brow", an idiom that collapses man's muscular and mental work. Eve's labor is to reproduce the species in pain and subservience to Adam.'2 0401077 Modes of Reading Lisa Regan She quotes the gospel of John: 'In the beginning was the Word, and the Word was with God, and the word was God. ...read more.

The explicit eroticism narrows the gulf that separates the two by the power of the imagination. 'All day I think of her' (line 4), 'my slow heat entering/ each pearl' (lines 7-8) , 'She's beautiful. I dream about her/ in my...bed' (lines 9-10), 'my red lips part' (line 16), 'I see/ her...Undressing...slipping naked into bed' (lines 17-20), 0401077 Modes of Reading Lisa Regan 'All night...I burn.' (Lines 23-24) This imagery is loving, longing, suggestive of a total dependence. At the same time, the importance of the pearls, which mean so much to the mistress that she needs them to be warmed throughout the day, raise the status of the maid as someone who is depended upon. The brushing of the hair is another picture associated in my mind with mothering, and maybe this suggests the dependence of the mistress upon this girl. Duffy creates the possibility of an inter-dependent relationship between women, she paints the desire of one woman for another, she gives a traditional symbol of heterosexual love an important role in female relations and she empowers a subordinate woman by giving her a voice. In every way, she overturns essentialist presuppositions of gender roles. Poetry from the last hundred years or so has become more overtly subversive of gender stereotypes, for the obvious reason that the traditional Western patriarchal society has undergone penetrative questioning and in many ways been uprooted. This is a result of events which have created opportunities for members of both sexes to undertake new roles, and meant that attitudes to expression through literature (and other media) have become far more tolerant. At the same time, it is hardly fair to say that it is only in modern history that artists have questioned essentialist gender theory - as we can see from the example of Anne Bradstreet, a pioneer of women's writing. Even in the First World War, that essentialist code was still strong and reversal of roles more surprising and more subversive than in literature today, where we do not judge by the same standards and expectations. ...read more.