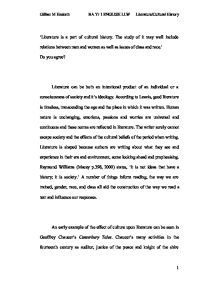 'Literature is a part of cultural history - The study of it may well include relations between men and women as well as issues of class and race' Do you agree?

'Literature is a part of cultural history. The study of it may well include relations between men and women as well as issues of class and race.' Do you agree? Literature can be both an intentional product of an individual or a consciousness of society and it's ideology. According to Leavis, good literature is timeless, transcending the age and the place in which it was written. Human nature is unchanging, emotions, passions and worries are universal and continuous and these norms are reflected in literature. The writer surely cannot escape society and the effects of the cultural beliefs of the period when writing. Literature is shaped because authors are writing about what they see and experience in their era and environment, some looking ahead and prophesising. Raymond Williams (Macey p.398, 2000) states, 'it is not ideas that have a history; it is society.' A number of things inform reading, the way we are trained, gender, race, and class all aid the construction of the way we read a text and influence our responses. An early example of the effect of culture upon literature can be seen in Geoffrey Chaucer's Canterbury Tales. Chaucer's many activities in the fourteenth century as auditor, justice of the peace and knight of the shire brought him into association with the ruling classes. A member of King Edward's personal household, Chaucer would have been influenced on his diplomatic missions by the cultures of Spain, France and Italy. As poet and author, these cultural opportunities must have inspired Chaucer. He wrote lyrical poetry modelled on the famous French and Italian poets. Troilus's song in Troilus and Criseyde is reportedly Chaucer's translation of Petrarch's sonnet. Canterbury Tales observes society and the culture of Chaucer's epoch, satirising religion and the class system by illustrating stereotypical individuals, often inverting their roles within society. Chaucer's middle class youth amongst the mercantile atmosphere of London's Vintry to his elevated position amongst aristocracy gave him an insight into the class structural system. ...read more.

two cultures, the wildness of the black woman and a gentleness of the white, set into literature for the consumption of eighteenth century society. For over one hundred years, this novel has been a window for readers to view imperialistic culture and the competition for Africa by their ancestral empires. Raymond Williams believed that all culture was related to economic and social organisation and that historical and cultural changes must alter the way in which literature is perceived. Today, Heart of Darkness might be read as a message for man, supported by historical evidence rather than as merely a novel. This literature has been utilised as a base for the twentieth century film, Apocalypse Now, taking the literature, based on a culture and re-presenting it to a modern day society audience, via screen. This literature is therefore a product of the culture of the time. Literature can be re-presented to another culture at another given time. Communication and community are the main themes of the English novel and Raymond Williams argues it is a vehicle for social criticism, offering ways of seeing that is communicable to others. Jane Austen, sets her characters amongst an environment modelled on the real life society and the culture she knew, exploring male power and female helplessenss. In Sense and Sensibility, she transports her wealthy upper middle class characters from the countryside to London, illustrating the landscape and presenting the cultural background. Austen portrays the males as superior with strong character traits; the dashingly handsome Willoughby, the selfish John Dashwood, the ruthless Rovert Ferrars, Mr. Palmers who is rude and droll and Sir John, who only judges men as sportsmen. The stereotypical pursuits of the era and class, hunting and riding for the males, pianoforte and the constant pursuit of attachments for the females is Austen's view of the culture of the time. A socially constructed history that saw the female as weak, too full of sensibility to conduct themselves in important situations, the women would never achieve any power outside the home. ...read more.

It is evident that The Table of English literature's list of valued and important chosen readings are still amongst the texts studied today in schools, colleges and universities today, shaping their understandings, beliefs and culture. Popular culture, for example, soap operas could be seen as a parallel of Chaucer's tales yet the popular dramas portray a realist vision of present day society, life situations, recent trends, issues and visual images of a present day culture. Here, culture has created literature and is re-presented in the form of TV drama. Would popular culture, a culture of the masses become part of The Canon? Would Coronation Street and Eastenders be found in a Table of English Literature? Or is one particular group of society still presiding over what is good and valued literature? Literature encompasses all of culture in its entirety and is therefore part of cultural history. Culture also provides a method for change. Culture reflects the ideology of the time and at the same time recreates it. Literature is part of cultural history, it is not only a record of history, Chaucer, Bacon, Shakespeare, Newton, De Foe, Pope, Hume, Mill, Conrad, Owen, but often ideas led literature as Darwin's legacy. Austen, Bronte, Orwell's l984, and Atwood's 'The Handmaid's Tale' imposes ideas, communication, messages, and futuristic implications fashioning beliefs upon society. Some of the key purposes of literature, to entertain, inform, instruct, recommend opinions, make us think or choose and even to uplift society are in force within society's everyday culture. Literature is more than words on a page, it can present scientific development and exploration and represent amongst others, social, historical, political, feminist and religious views. Literature is a product of culture and is therefore a part of historical culture. Literature is affected by rules of past and present cultural trends. Culture is affected by past and present literature. Literature allows the presentation of culture at a given time and therefore, is part of cultural history. ...read more.