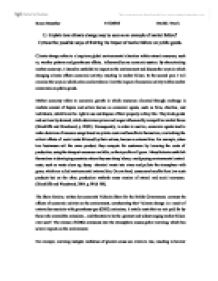 1) Explain how climate change may be seen as an example of market failure? 2) Describe possible ways of limiting the impact of market failure on public goods. Climate change refers to a long-term global environmental alteration within natural resources, such as, weather patterns and greenhouse effects, influenced by our economic system. By characterising market economy , I intend to establish its impact on the environment and discuss the ways in which changing climate affects economic activity, resulting in market failure. In the second part, I will examine the ways in which action can be taken to limit the impact of economic activity within market economies on public goods. Market economy refers to economic growth in which resources allocated through exchange in markets consist of buyers and sellers known as economic agents, such as firms, charities, and individuals, which have the right to use and dispose of their property as they like. They trade goods and services by demand, which determines prices and wages influenced by competitive market forces (Hinchliffe and Woodward, p. ...read more.

(Acid Rain- The Internet) Market economy also impact upon resources and services that are non-excludable, such as forests, water and air, known as public goods. This means that the consumption of air by one individual does not reduce the amount of air available for consumption by others; and no one can be excluded from using air. (Hinchliffe and Woodward, 2004, p.103) As economic agents base consumption on financial profits only, they have no incentive to preserve the environment voluntarily. As the usage of air is free, they take advantage by polluting the air with chemicals, which bear costs mainly to the Government by having to clean the emissions. This is called the free riding problem, which causes market failure since consumers can not be excluded or have to pay for the good or service. (Tutor2u -The Internet) As many of our natural resources are becoming exhaustible, there are viable ways to control the market, which may limit the impact of market failure on public goods, such as green taxes enforcement and extending private ownership by granting property rights. ...read more.

(Hinchliffe and Woodward, 2004, p.107,108) In conclusion, market economy is an economy in which the production, distribution and exchange is controlled by individuals and privately owned corporations who base their economic activities on profits only, which influenced by the pressures of competition. As a result, economic activity produces a vicious circle, causing environmental degradation by pollution, which causes global warming and climate change, resulting in social costs. In turn, climate change causes the decline of resources, such as crop yields and sufficient production of foods. Moreover, economic activity affects us all by the damage done to public goods and slowly making resources exhaustible. Two ways were suggested to try to control market activity, enforcing green tax and extending private ownership. However, to put these solutions into practice would be complicated and perhaps naive, as it would mean trusting economic agents to use resources as intended to preserve the environment. Furthermore, enforcing green taxes, creates inequality between rich and poor as well as driving businesses to locate in developing countries. As the current situation creates uncertainty of the existence of future generations there is a need for an immediate action and perhaps the way to go forward is to reconstruct market economy and turn it to be environment friendly. ...read more.