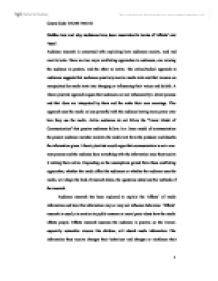 Outline how and why audiences have been researched in terms of ‘effects’ and ‘uses’.

Audience research is concerned with explaining how audiences receive, read and react to texts. There are two major conflicting approaches to audiences, one viewing the audience as passive, and the other as active. The critical/radical approach to audiences suggests that audiences passively receive media texts and that viewers are manipulated by media texts into changing or influencing their values and beliefs. A liberal pluralist approach argues that audiences are not influenced by a direct process and that ideas are interpreted by them and the make their own meanings. This approach sees the media as less powerful with the audience having more power over how they use the media. Active audiences do not follow the “Linear Model of Communication” that passive audiences follow. In a linear model of communication the passive audience member receives the media text from the producer and absorbs the information given. Liberal pluralists would argue that communication is not a one-way process and the audience does something with the information once they receive it making them active. Depending on the assumptions gained from these conflicting approaches, whether the media effect the audiences or whether the audience uses the media, will shape the kind of research taken, the questions asked and the methods of the research.

Audience research has been explored to explain the ‘effects’ of media information and how this information may or may not influence behaviour. ‘Effects’ research is usually in reaction to public concern or moral panic about how the media affects people. Effects research assumes the audience is passive, so the viewer, especially vulnerable viewers like children, will absorb media information. The information they receive changes their behaviour and changes or reinforces their values (Sonia Livingston, 2005). To investigate media effects a number of methods have been undertaken. Traditionally experimental research like laboratory research has been prevalent. Experimental research is carried out in a controlled environment to determine how subjects will respond to particular media and effects research is mainly concerned with the effects from viewing television. A good example of this kind of research is a study called the ‘Bobo Doll’ experiment, carried out by Albert Bandura in the 1960s. The assumption was that children learn by conditioning so prolonged exposure to violence on television would lead to children acting aggressively in their everyday lives and this behaviour as an acceptable action. Bandura’s experiment was on groups of children and how the reacted to viewing aggression towards an inflatable doll. One group of children was shown a film where aggression was rewarded, another group was shown a film where aggression was punished and a final group was shown just aggressive behaviour. All the children where then individually monitored in a room, with the same doll they has seen in the film. Only the children that had seen aggression punished in the film did not act violently towards the doll. This study reinforces the vulnerability of children to media and how they passively absorb the behaviour they view causing them to act in similar ways. The experimental approach does not test subjects in their usual lives and results tends not to take into account the attitudes of the subjects before the trials so field-research has been developed as an extension to explore audiences in a less simulated environment. However, this research in general presupposes that the audience is naïve and they do nothing with the information they receive. Effects research seeks to find evidence of audiences as passive and gives simple answers about complex social problems. A liberal-pluralist approach views audiences as actively seeking to make sense of the multifaceted world they live in. We will now explore this approach further.

The ‘uses’ research approach looks to examine audiences as being active in their media consumption. The audience uses the media in different ways and interprets it differently. This approach to research does not ignore that the media have effects on the public, as Sonia Livingston states ‘…most researchers do infact believe that the media have effects—why study the media otherwise?’ (Livingston, 2005, p 26)  Uses research tries to explore how audiences use the media, what they do with the information and try to place audience research in a cultural and social context. Different methods of uses research include the ‘uses and gratifications’ approach, ethnographic studies and reception studies. ‘Uses and gratifications’ is an approach developed by Katz and Blumler and explored ‘…not what the media do to people but what people do with the media’ (Livingston, 2005, p 21). The main arguments in this approach are that audiences choose which programs to watch and which newspapers to buy and that people discuss the media and may be more influenced by ‘opinion leaders’ ―or respected members of a community ― (Livingston, 2005) than by the media directly. In ethnographic studies, researchers attempt to understand audience’s behaviour through direct contact in their daily lives. Researches look at the audience as both passive and active. This type of research aims to take a closer, more complex look at how people relate to the media in their cultural settings. The majority of ethnographic studies look into the impact of television to the viewers as a mass and as individuals. Ethnographic studies are based around three models of communication, media imperialism, media and development and the global/local model. The media imperialism thesis looks into the cultural imperialism of countries, such as the U.S, exerting power over other parts of the world (Marie Gillespie, 2005). The media and development model is based on the idea that the media can be used to help develop modernity in societies. This idea is linked closely to ‘uses and gratifications’ research as it explores how the media meets individual and public requirements. The global/local model of communication forms an alternative to media imperialism investigating how local exports have individual power in a global structure. The local framework challenges the dominant meaning and either resists it or produces something from it from within its own framework. Reception studies are largely of an ethnographic nature. This form of studies draws upon Stuart Hall’s encoding and decoding theory of reception. The receiver’s interpretation of a media text may not be the intended meaning of the sender. Reception studies view the receiver’s interpretation to be of more importance than the meaning that was originally intended. In a study to investigate the supposed influence of cultural imperialism, Liebes and Katz (1990) showed an episode of Dallas (USA, CBS, 1978-1991) to small groups of people in Israel, from different cultural circumstances. The groups were then asked to discuss and re-tell the episode they had watched. In Liebes and Katz initial analysis of the structure of Dallas, primordial themes such as kinships, sex and property where prominent. However the study found that different meanings where made depending on the viewers cultural and social background. For example Liebes and Katz found that Russians picked up on ideological themes making an oppositional reading and that Moroccan Arabs focused on narrative (Livingston, 2005). This study emphasises the global/local model of communication and that viewers bring their own cultural outlook on texts. Watching Dallas is a more complex and active process than suggested by the media imperialism model.

Audience research is an important aspect of the study of media. Researcher’s of audiences in terms of ‘uses’ accept that ‘effects’ are there but they are much more subtle and closely linked with culture and society. Ever expanding and changeable media technologies mean that audience research also expands and changes. The questions of passivity and activity still remain but the theories, methods and answers are constantly changing and evolving. Each research method creates new questions about audiences. To simply assume that the audience is passive and is easily affected by the media is not a satisfactory conclusion and is too generalised. However to dismiss that the media has no effects on viewers is also unsatisfactory and unrealistic. ‘Effects’ research is not carried out to purely disprove the ‘uses’ theory, it is carried out to reinforce questions about the passivity of certain audiences, at certain times, in certain places. Both quantitative and qualitative methods of research are useful however they need to be brought together to gain a clearer perspective. Audiences are growing with new media, brought about mainly by the internet, so careful examination has to be taken of how media is being used in the world today. To continue exploring audiences in an ever-increasing media filled society, research has to pay close attention to how our everyday situations influence media and how we mould media into our day-to-day lives.