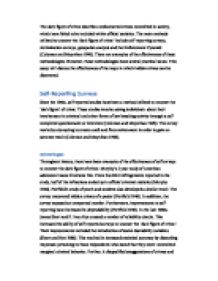 Methods of Uncovering the Dark Figure of Crime

The dark figure of crime describes undiscovered crimes committed in society, which have failed to be included within official statistics. The main methods utilized to uncover the 'dark figure of crime' include self-reporting surveys, victimization surveys, geospatial analysis and the Enforcement Pyramid (Coleman and Moynihan 1996). There are examples of the effectiveness of these methodologies. However, these methodologies have several practical issues. This essay will discuss the effectiveness of the ways in which hidden crimes can be discovered. Self-Reporting Surveys Since the 1940s, self reported studies have been a method utilized to uncover the 'dark figure' of crime. These studies involve asking individuals about their involvement in criminal and other forms of law breaking activity through a self completed questionnaire or interview (Coleman and Moynihan 1996). The survey works by attempting to create a safe and free environment in order to gain an accurate result (Coleman and Moynihan 1996). Advantages Throughout history, there have been examples of the effectiveness of self surveys to uncover the dark figure of crime. Murphy's 5 year study of American adolescent males illustrates this. From the 6416 infringements reported in the study, half of the infractions ended up in official criminal statistics (Murphy 1946). Portfield's study of youth and students also developed a similar result. The survey uncovered hidden crimes of a pastor (Portfield 1946). ...read more.

Disadvnatages While victimization surveys are an effective method of uncovering the dark figure of crime, there are problems. The major issue is that victimization surveys only measure crimes with identifiable victims. Undiscovered crimes, such as environmental degradation, are impossible to uncover in victim surveys. The surveys also do not cover 'victimless' or 'consensual' crimes where a complainant is non-existent. These include activities where the main impact is on the perpetrator like illicit drug use and prostitution. It also includes other crimes against the state where there is no direct victim such as trafficking and importation of illegal drugs, sale of pornography, illegal gambling, immigration crime, intellectual property crime, piracy, terrorism and organised crimes. Sample size can also negatively impact uncovering the dark figure. As crime is a relatively rare event, the sampling size must be sufficiently. This can demonstrated in the 1992 BCS survey where 45% of respondents recalled being victims of crime. Furthermore, the sample must demographically represent the population, which can be difficult due to non-respondents. Mayhew argued that non-respondents include a disproportionately high number of victims. In contrast, Crawford disagrees. He contends that the incentive for victims to participate is substantially higher than non-victims. This means that in order to discover the dark figure of crime, criminologists must rely upon informed speculations gathered from studies of known victims, as it is not clear why there are non-respondents. ...read more.

Sociologists believe that individuals and firms will regard tough enforcement action as more procedurally fair after persuasion has been used. It is also imperative that regulatory forces punish rule breakers, which is only able to occur if regulators actively devote their resources to uncovering hidden crimes and therefore treating them appropriately. Ayres and Braithwaite (1992) argue that the greater the heights of tough enforcement to which an agency can escalate (Braithwaite 1992). The more effective the agency will be at securing compliance and the less likely that it will have to resort to tough enforcement (Braithwaite 1992). Disadvantages The effectiveness of the Enforcement Pyramid in uncovering hidden crime is often challenged due to the way in which white-collar criminals utilize embedded laws and regulations to escape prosecution (Marmo, De Lint, Palmer 2011). This is particularly the case with limited liability companies, which allows individuals to escape the responsibilities involved in investing (Marmo, De Lint, Palmer 2011). In addition, the concept of capitalism entices companies to cut corners in order to establish higher levels of profits (Marmo, De Lint, Palmer 2011). Quite often government's will fail to resolve these issues in order to avoid an anti-business image being formed. Conclusion The dark figure of can be found through self-reporting surveys, victimization surveys, geospatial analysis and the Enforcement Pyramid. However all these methodologies have problems associated with them and therefore can produce inaccurate results. Therefore despite their success they are unable to uncover all the dark figures of crime. ...read more.