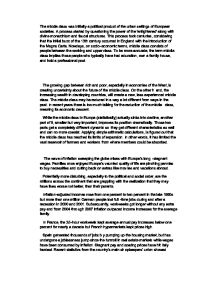 Middle Class Contraction. The growing gap between rich and poor, especially in economies of the West, is creating uncertainty about the future of the middle class.

The middle class was initially a political product of the urban settings of European societies. A process started by questioning the power of the 'enlightened' along with divine monarchism and feudal structures. This process took centuries, considering that the initial buzz of the 13th century occurred in England with the introduction of the Magna Carta. Nowdays, on socio-economic terms, middle class consists of people between the working and upper class. To be more accurate, the term middle class implies those people who typically have had education, own a family house, and hold a professional post. The growing gap between rich and poor, especially in economies of the West, is creating uncertainty about the future of the middle class. ...read more.

The wave of inflation sweeping the globe mixes with Europe's long-stagnant wages. Families once enjoyed Europe's vaunted quality of life are pinching pennies to buy necessities and cutting back on extras like movies and vacations abroad. Potentially more disturbing, especially to the political and social order, are the millions across the continent that are grappling with the realization that they may have lives worse not better, than their parents. Inflation-adjusted incomes rose from one percent to two percent in the late 1990s but more than one million German people lost full-time jobs during and after a recession in 2000 and 2001. Subsequently, workweeks got longer without any extra pay and from 2004 through 2007 inflation outpaced income increases for the average family. ...read more.

and public utilities. Those are the main institutions that more or less created the middle class, and were essential in broadening it and strengthening it; in countries of Europe. A huge number of people in the labour force see their income getting frozen (as in Germany for the last 3 years) or just raising disproportionately in terms of covering the demands of a capitalistic society. The future (that nobody can predict) as it seems from now, is about what is often described as the 'economy of the stars'. Many people in the labour force, accepting to work for many hours; getting a mismatched reward, on their try to become managers in the leading productive process where very few can progress far and where 'winner takes all'. ...read more.