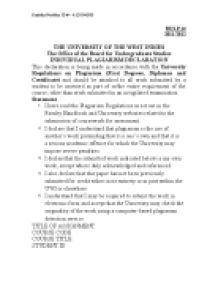 Mighty Chalkdust, has sung ah want me grandfather back pay. Support Chalkdusts call for reparation for the enslavement of Blacks in the Caribbean

﻿Kashka Mottley ID # - 412004383 BUS.P.14 2011/2012 THE UNIVERSITY OF THE WEST INDIES The Office of the Board for Undergraduate Studies INDIVIDUAL PLAGIARISM DECLARATION This declaration is being made in accordance with the University Regulations on Plagiarism (First Degrees, Diplomas and Certificate) and should be attached to all work submitted by a student to be assessed as part of or/the entire requirement of the course, other than work submitted in an invigilated examination. Statement 1. I have read the Plagiarism Regulations as set out in the Faculty Handbook and University websites related to the submission of coursework for assessment. 2. I declare that I understand that plagiarism is the use of another?s work pretending that it is one?s own and that it is a serious academic offence for which the University may impose severe penalties. 3. I declarethat the submitted work indicated below is my own work, except where duly acknowledged and referenced. 4. I also declare that this paper has not been previously submitted for credit either in its entirety or in part within the UWI or elsewhere. 5. I understand that I may be required to submit the work in electronic form and accept that the University may check the originality of the work using a computer-based plagiarism detection service. ...read more.

According to Eugene D Genovese in the Political Economy of Slavery, slaves were treated based on the colour of their skin with the lighter skinned slaves stationed in the house with relatively better clothing and food. This hierarchy of skin colour has long been embedded in the social standings of many of the Caribbean islands. In turn many of those of black decent have began to turn away from African culture and nationalism. Through Slavery, many of African descent have not only been robbed of their culture but depending on how dark they are has been denied equal opportunities. However with the money gained from reparations this can slowly be reversed. This can be achieved through various programs that would ?investigate, identify and counter those messages and images that negate the value of the knowledge and culture of people of African descent by building awareness of the fundamental contribution of African peoples to world civilization,?[3] This would result in the elimination of the ?black? stigma as people become more aware of the African heritage, thus eliminating the Pigmentocracy so fiercely upheld by many of the Caribbean societies. Reparations are justified due to the damaging affects of slavery on the people of African descent psychologically. ...read more.

Whilst the triangular trade helps Britain developed economically, it left the economy of the various countries o the Caribbean stagnant for hundreds of years to follow, due to its plantation economy. Thus, it is apparent that European countries such as Great Britain, through the use of the triangular trade and thus slavery have laid the foundation for modern day capitalism as well as modern society. As such it is clear that England as well other European colonist countries greatly benefited economically from the triangular trade and slavery in the Caribbean. Due to this investment through the forced labor of slaves, their descendants now freed are deserving of a return as a result of their ancestors ?investments?. These countries that were thrust into the modern age on the suffering of millions of African slaves, should in fact take into consideration their debt. In conclusion, it is obvious that through their own greed, the European colonists have, in their pursuit of power, exploited not only the slaves that they had carried over from Africa, but through exploitation of the West Indies as a land. This has left permanent scars psychologically and socially, whilst colonists have only used these exploits as a stepping-stone. As such it is conclusive that these colonies should pay reparations for the damages suffered as result of their greed. ...read more.