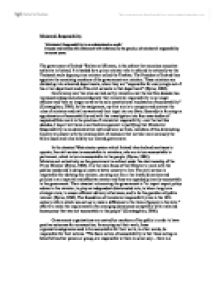 Ministerial Responsibility. 'Ministerial Responsibility is an administrative myth' Discuss and analyse this statement with reference to the practice of ministerial responsibility in recent years. The government of Ireland "Rialtas na hE�reann, is the cabinet that exercises executive authority in Ireland. It is headed by a prime minister who is referred to nationally as the Taoiseach and a deputy prime minister called the Tan�iste. The President of Ireland then appoints the remaining members of the government as a minister. These ministers are divided up into allocated departments, where they are "responsible for every single act of his or her department and of the civil servants in that department" (Byrne, 1996). Controversy over the roles carried out by ministers over the last few decades has increased widespread acknowledgment that ministerial responsibility is no longer efficient and "can no longer serve as the sole constitutional touchstone of accountability" (Connaughton, 2006). In this assignment, my first aim is to compare and contrast the roles of ministers and civil servants and their input into our State. Secondly in forming an apprehension of accountability and with the investigation into four case studies of neglected State work in the practice of ministerial responsibility over the last few decades, I hope I will have a worthwhile argument in justifying that Ministerial Responsibility is an administrative myth and how we Irish, members of this diminishing Country at present with the envelopment of recession that we take more seriously the fallen issues and roles held by our elected government. In the classical Westminster system which Ireland inherited and continues to operate, the civil service is accountable to ministers, who are in turn accountable to parliament, which in turn is accountable to the people. (Byrne, 1996). Ministers act collectively as the government in cabinet under the chairmanship of the Prime Minister (Byrne, 1996). It is the main focus of the Minister to work with the publics needs and in doing so create a better country to live. ...read more.

An operational review conducted by the panel of internal staff and external representatives was led by the new Chief Executive, Bill Morton and was undertaken to ensure that the problems in 2000 were not replicated in the following school academic results year 2001. The Deloitte and Touche report "A Review into Exam Results Issues concerning the Scottish Qualifications Authority" was published on 31 October. The report found that: "Whilst data handling issues were, ultimately, a critical flaw in Diet 2000, it would be inappropriate to conclude that this was the only deficiency in performance or that the arrangements for data handling were the single cause of the problems. No one single problem lies at the root of the SQA's poor performance this year" (Deloitte and Touche, 2000). Rather, there were "weaknesses and difficulties in a number of interlinked management, process and information systems areas which, cumulatively, overwhelmed the delivery of National Qualifications for Diet 2000" (Meeting the Parliament, 2000). These interlinked management weaknesses and difficulties included: � A lack of leadership at senior management level � An improper organisational structure and poor communication � Lack of planning in relation to the implementation of Higher Still � Inadequate computer system specification and planning � Lack of clear definition of operational processes and of contingency arrangements � Poor handling of the marking process. (Deloitte and Touche, 2000). It is the development of agencies such as the SQA that has brought issues of responsibility and accountability to the public fore. It is these various NDPBs and agencies that have created more complex and obtrusive accountability structures. With the government increasingly involving the private sector in new structures of management and letting them participate in political affairs involving the public such as the SQA, the lines of accountability becomes more unclear, and the person who is held responsible for major failures such as the exam results mayhem in 2000 which cost the people of Scotland an estimated �11 million can not be defined. ...read more.