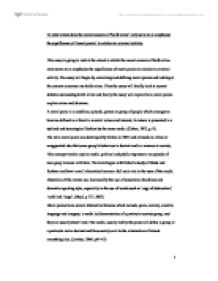 To what extent does the recent concern of 'knife crime' only serve to re-emphasise the significance of 'moral panics' in relation to criminal activity. This essay is going to look at the extent to which the recent concern of knife crime only serves to re-emphasise the significance of moral panics in relation to criminal activity. The essay will begin by examining and defining moral panics and looking at the current concerns over knife crime. Then the essay will briefly look at current debates surrounding knife crime and finally the essay will explore how moral panics explain crime and deviance. A moral panic is a condition, episode, person or group of people which emerges to become defined as a threat to societal values and interest; its nature is presented in a stylized and stereotypical fashion by the mass media. (Cohen, 1972, p. 9) The term moral panic was developed by Cohen in 1967 and is based on a false or exaggerated idea that some group's behaviour is deviant and is a menace to society. This concept tried to explain media, political and public response to an episode of teen gang violence in Britain. The term began with Cohen's study of Mods and Rockers and how a small altercation became a full scale riot in the eyes of the media. Distortion of the events was increased by the use of sensational headlines and dramatic reporting style, especially in the use of words such as `orgy of destruction', `mob' and `siege'. ...read more.

In fact, the most common weapon used in a violent crime in England and Wales is not a gun - but a knife. There are almost four times more knife related killings as firearms related killings, and of the 25 violent teenager deaths nationwide since the beginning of 2007, 17 have been stabbings. (Casciani, 2007) Steele, debated the concern of knife crime in the Telegraph and added there was not enough precise information on the scale of knife crime and the use of knives. He also added there was no indication whether knife crime was escalating or not. The deaths/injuries of people through knife crime reflect a truth which is widely recognised, even if the scale is unclear. Lane asked "if are we really witnessing a rise in so-called knife culture or is the recent coverage afforded to the issue in newspapers just a spot of media hysteria?" The media has a way of describing knife crime and will always use the most emotive language or a headline which causes us to think twice about the subject, however fail to add that the knife is merely a tool used in crime. Without dealing with the underlying causes of violent crime such as inequality and relative deprivation, programmes to reduce knife crime will have only a limited effect. Stabbings are not caused merely by the presence of a knife. . (House of Commons, 2007) Crime and deviancy come from social interactions and from the power of social groups to identify and label certain behaviours. ...read more.

The essay then moved on to focus on some of the debates surrounding knife crime and how moral panics are involved in the issue of reporting crime. Finally the essay explored crime and deviance and how moral panics can explain such crime and deviance. As I have explored in this essay knife crime is a problem and needs to be challenged by those who make the laws and by those whom protect our societies. However knife crime, stabbings, and even those whom carry a knife remain the minority. Media representation actively contributes to a society's construction of crime and also improves the same societies understanding of these crimes. (Welch, Price and Yankey, 2002 p 3-30) Moral panics assist individuals to make decisions on what is right and wrong in society. Within a society, the mass media are influential voices to how the public make sense of the crime and criminal justice. For some the media is the only way of accessing information, they are a friend of the public and use this to influence opinions and feelings. As Cohen describes it, the media is a source of information to people that is similar to word of mouth, in respect to a range of problems. The moral panic creates an awareness of the problem and what actions are called for to solve it. And if the media can so successfully engage the public's fascination, they can just as easily tap into and increase people's fears about crime. The moral panic over knife crime as displayed by the mass media, only serves to re-emphasise the significance of 'moral panics' in relation to criminal activity. ...read more.