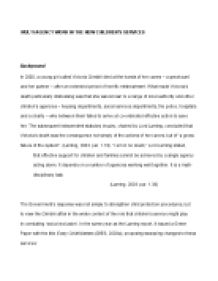 ï»¿MULTI-AGENCY WORK IN THE NEW CHILDREN’S SERVICES Background In 2000, a young girl called Victoria Climbié died at the hands of her carers – a great-aunt and her partner – after an extended period of horrific mistreatment. What made Victoria’s death particularly distressing was that she was known to a range of local authority and other children’s agencies – housing departments, social services departments, the police, hospitals and a charity – who between them failed to arrive at co-ordinated effective action to save her. The subsequent independent statutory inquiry, chaired by Lord Laming, concluded that Victoria’s death was the consequence not simply of the actions of her carers, but of “a gross failure of the system”. (Laming, 2003: par. 1.18). “I am in no doubt,” Lord Laming stated, that effective support for children and families cannot be achieved by a single agency acting alone. It depends on a number of agencies working well together. It is a multi-disciplinary task. (Laming, 2003: par. 1.30) The Government’s response was not simply to strengthen child protection procedures, but to view the Climbié affair in the wider context of the role that children’s service might play in combating ‘social exclusion’. In the same year as the Laming report, it issued a Green Paper with the title Every Child Matters (DfES, 2003a), proposing sweeping changes to these services: We want to put children at the heart of our policies, and to organise services around their needs. Radical reform is needed to break down organisational boundaries. The Government’s aim is that there should be one person in charge locally and nationally with the responsibility for improving children’s lives. Key services for children should be integrated within a single organisational focus at both levels. (DfES, 2003a: 9) Every Child Matters went on to propose a framework of desirable outcomes for children which might form the basis of common assessment systems, shared working practices, and, above all, shared goals for childhood professionals. ...read more.

Taken together, these characteristics mean that multi-agency working is not as straightforwardly rational as repeated government exhortations might make it appear to be. Partly, this is because the partners in such working remain bound by separate targets and/or lines of responsibility. Partly, it is because the common frameworks within which they are expected to operate are somewhat loosely coupled lists of desirable outcomes or disadvantaging factors, offering no clear guidance as to priorities or relationships between the separate items in the lists. In these circumstances, collaboration may mean no more than a form of more-or-less enlightened self-interest, in which different agencies work together insofar ? and only insofar ? as this enables them to pursue their own goals more effectively ? what one local authority officer described as like a set of ?cuckoos living in one nest? (Ainscow et al., in press). Alternatively, collaboration may involve partners in meeting the formidable challenge of doing what national frameworks singularly fail to do ? that is, developing their own ?vision and strategy? (Geddes, 2006, National Strategy for Neighbourhood Renewal, 2000) ? that is, a sense of how outcomes fit together, how disadvantaging factors interact, and how some coherent shared response can be made. What this analysis suggests is that New Labour?s apparently rational commitment to multi-agency working may in fact be badly under-conceptualised and under-specified. It offers accounts of desirable outcomes for children and young people, and explanations of why those outcomes fail to materialise for many. Yet these accounts and explanations are less convincing on inspection than they seem at first sight. It mandates collaboration, but fails to align other aspects of policy ? notably, of accountability regimes ? with this imperative. And it sets up collaborative structures, yet it is difficult to see what has been done to address the known problems with collaborative working that we identified in our review of the literature above. ...read more.

Although we suggested earlier that it was ironic that the National Strategy for Neighbourhood Renewal relegated the issue of ?joining up? to one report out of eighteen, that report in fact had much to say that was important. As we have done here, for instance, it argued that: Holistic government in particular places cannot be imposed top-down from a distance. If frameworks for co-operation are to be effective, they need to be more than lists of externally imposed priorities. They must also reflect the whole needs of communities and the priorities of local people. Joined up working must create room for personal initiative and creativity. (National Strategy for Neighbourhood Renewal, 2000: par. 1.17) This does not, it seem to us, demand a total withdrawal of central government from the field. New Labour has made important contributions by reaffirming the central importance of public services to the lives of vulnerable children and families, stating its commitment to multi agency working as a means of enhancing the effectiveness of public services, and creating structures which weaken some of the more obvious barriers to collaboration. It could, we believe, now go further by making a serious commitment to localism, seeing itself as the creator and guardian of spaces for local decision-making, and letting go its attempt to micro-manage services through inflexible accountability mechanisms and multiple projects and initiatives. In other words, the recommendations of PAT 17 some eight years ago, now have to be heeded: Central government, and in particular the failure of Departments to act corporately, has been responsible over the years for many of the factors which make local joint working difficult. Examples include the fragmentation of delivery machinery, an uncoordinated flow of new initiatives, a proliferation of requirements for issue-led partnerships, too much central direction and regulation, and financial frameworks, performance indicators and measures that tend to reinforce ?silo? behaviour. A more co-ordinated framework for coherence and consistency of delivery is needed. ( National Strategy for Neighbourhood Renewal, 2000: executive summary, par. ...read more.