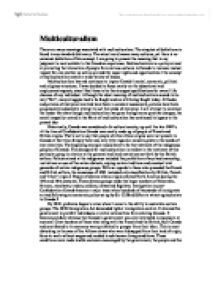 Multiculturalism. Multiculturalism is a policy aimed at promoting the interaction of people from various cultures in Canada to increase mutual respect for one another as well as provide for equal rights and opportunities

Multiculturalism There are many meanings associated with multiculturalism. The simplest of definitions is found in any standard dictionary. The actual word means many cultures, yet there is no universal definition of this concept. I am going to present the meaning that in my judgment is most suitable to the Canadian experience. Multiculturalism is a policy aimed at promoting the interaction of people from various cultures in Canada to increase mutual respect for one another as well as provide for equal rights and opportunities.1 the concept of multiculturalism entails a wide variety of issues. Multiculturalism has and continues to impact Canada�s social, economic, political and religious structures. I have decided to focus mostly on the educational and employment aspects, since I feel these to be the strongest qualifications for overall life chances of any individual. Although the ideal meaning of multiculturalism sounds to be very "fair", many struggles had to be fought and are still being fought today. Attitudes and policies of everyone involved have been in constant assessment; policies have been progressively adjusted to attempt to suit the needs of everyone. I will attempt to convince the reader that even though multiculturalism has gone through some positive changes, the social inequality rooted in the fabric of multiculturalism has continued its legacy to the present day Historically, Canada was considered a bi-cultural society, up until the late 1800�s. ...read more.

A theory of the "vertical mosaic" was proposed by John Porter that stemmed from the belief that certain groups were socially and economically inferior to others. In his research, Porter ranked the Caucasian group as being at the very top of the social hierarchy and the African ancestry group as being at the very bottom of the hierarchy. The Asians and Natives were also included. The Asian ranking higher than blacks and natives. Although the theory may have been statistically correct, there was no real concrete explanation as to the cause of certain groups having little success in life. At first it was the belief that people of color weren�t intelligent, but I believe that the reason for such a hierarchy (if it did and does exist) was the lack of a positive self-image that was not portrayed in any of the Canadian institutions. Ethnic peoples creativity and intelligence was masked and considered unimportant when however it has been an enormous asset to Canadian history and future. Educational, political, religious and judicial institutions were very racist and discouraging to those of other cultures and backgrounds. It wasn�t until the late 1960�s that real changes in policies and attitudes were developed to recognize the multicultural contributions. The idea of equality of cultures did not originate from the government. It was the 60�s Cultural Revolution that influenced the government in its pursuit to define Canada as a multicultural society. ...read more.

The aim of Affirmative action programs is not to take away jobs from certain individuals, although that seems to be inevitable, but to have a number of minorities within the work force that equally reflect the number of minorities in society. Another complaint has been the cost of such programs. But as noted by John Berry, "...the economic argument is merely a front for deep-seated underlying bigotry."8 Education strides still have to be considered because there is still not enough minority teachers and even fewer ethnic courses. Caucasians are insultingly over-represented in elementary, junior highs and high schools. To go through twelve years of school and not being able to learn about multiculturalism in Canada I believe to be crippling, not only to the minority student but to Canadian students as well. In conclusion, there have been many changes made in Canadian society due to multicultural policies and programs, and I believe most of these changes to be positive. However, more changes are needed and these changes need to start in the elementary school curriculum. From the beginning school years children should be encouraged to learn about themselves as well as others who always have and will contribute to Canadian society. In defense of my thesis, racism is a legacy that is passed on from generation to generation and it will continue to plague Canadian society because we are all different. Perhaps there will come a time when people will not even necessarily like one another but respect each other. ...read more.