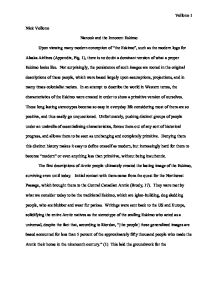 Nanook and the Innocent Eskimo

Nick Vollono Nanook and the Innocent Eskimo Upon viewing many modern conception of "the Eskimo", such as the modern logo for Alaska Airlines (Appendix, Fig. 1), there is no doubt a dominant version of what a proper Eskimo looks like. Not surprisingly, the persistence of such images are rooted in the original descriptions of these people, which were based largely upon assumptions, projections, and in many times colonialist racism. In an attempt to describe the world in Western terms, the characteristics of the Eskimo were created in order to show a primitive version of ourselves. These long lasting stereotypes become so easy in everyday life considering most of them are so positive, and thus easily go unquestioned. Unfortunately, pushing distinct groups of people under an umbrella of essentializing characteristics, forces them out of any sort of historical progress, and allows them to be seen as unchanging and completely primitive. Denying them this distinct history makes it easy to define oneself as modern, but increasingly hard for them to become "modern" or even anything less than primitive, without being inauthentic. The first descriptions of Arctic people ultimately created the lasting image of the Eskimo, surviving even until today. Initial contact with them came from the quest for the Northwest Passage, which brought them to the Central Canadian Arctic (Brody, 17). ...read more.

Steffanson, an Arctic Explorer commented about the film in 1928, "it was not so truthful as I had hoped, nor yet (quite) as untruthful as I had feared" (Freeze, 48). His comment captures why Flaherty's appeal to preconceived notions of the Eskimo, since he put on film, which seemed completely real, a story which was not too farfetched, but surprising enough to be exotic, and yet confirming people's biases. He also points out numerous incorrect aspects of the film, including the impossibility of filming inside the igloo because of size, which meant only half of the structure was built, as well as the overdramatized scene of catching a seal, which probably was essentially a tug of war game. More damaging, though, are the ideas that Nanook would hunt large animals without guns, since this technology would have been adopted by this point in time during contact with traders. Additionally, he bites a phonograph in a childlike manner, underscoring his innocence, but also pointing out the historical inaccuracy, since this would be another technology seen by most Eskimos, because of traders. Flaherty wanted to show a purity of a past time, and his work was mainly done to preserve a culture before the period of contamination. ...read more.

In fact, "a many as fifteen thousand people may have lived in western Alaska in the early 1800s, divided into at least twelve socially and territorially distinct regional populations. Each...in turn was socially divided into a number of village groups" (Eskimo� 9), which seems to destroy the idea that these people were uncultured, decentralized, and isolated. By keeping these people labeled as primitives, and forcing them into a frozen ahistorical period, they are kept from ever being modern. Those viewing them get to be modern, and set themselves in opposition, but they are not allowed to be part of the modern world since their authenticity has been defined by their primitive and savage qualities. At the same time, Flaherty cannot be written off as completely malicious, or damaging, since despite his work being laughable in terms of complete authenticity, he did give a certain humanness to these otherwise unknown people. "Although the Inuit may have laughed at Flaherty, they also helped him immeasurably. Much of what Flaherty filmed reflected the Inuit image of their past." (Freeze, 54) In other words, they were allowed to show their own idea of the essence of their culture, and they willingly participated in the project. As opposed to seeing these people as brutal and violent they were shown as humans from a different part of the world, and different but also successful in their own real Appendix Figure 1: Alaska Airlines Logo http://www.upgradetravelbetter. ...read more.