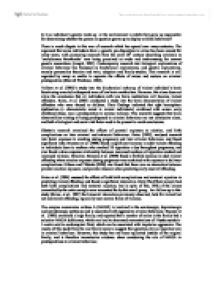 Nature/nurture and the causes of criminality

Is it an individual's genetic make-up or the environment in which they grow up responsible for determining whether the person in question grows up to display criminal behaviour? There is much dispute in this area of research which has spread over many centuries. The argument that some individuals have a genetic pre-disposition to crime has been around for many years, with pioneering research from the early 20th century describing criminals as 'evolutionary throwbacks' now being perceived as crude and embarrassing for current genetic researchers (Joseph, 2001). Contemporary research into biological explanations of criminal behaviour has focussed on biochemical explanations, and genetic explanations, namely personality theories and twin, adoption and family studies. This research is still regarded by many as unable to separate the effects of nature and nurture on criminal predisposition (Rhee & Waldman, 2002). Volkow et al. (1995)'s study into the biochemical make-up of violent individual's brain functioning revealed widespread areas of low brain metabolism. However, this alone does not allow the conclusion that all individuals with low brain metabolism will become violent offenders. Raine, et al. (2001) conducted a study into the brain characteristics of violent offenders who were abused as children. Their findings indicated that right hemisphere dysfunction (a characteristic noted in violent individuals) combined with severe early childhood abuse, was a predisposition to serious violence. This research suggests that brain abnormalities relating to being predisposed to criminal behaviour are not conclusive alone, and both a biological and social risk factor need to be present to reach conclusions. ...read more.

He attempted to explain the link to criminality by stating that extraverts, due to the low levels of arousal in their brain, seek out stimulation through high risk activities. Miles and Carey (1997) defined high risk activities as including anti-social behaviours and crime. Eysenck's (1996) extensive research into the notion that personality is a heritable trait concludes that if certain personality traits are found to be prevalent in individuals who commit crime, then crime must have a genetic basis. He (1996) devised a psychoticism, extraversion and neuroticism model (PEN model) which attempted to predict criminal behaviour based on personality traits. He found that these three factors could be used as a predictor for criminal behaviour, and found that it was especially true of psychoticism. It has been argued, however, that it is the interaction of a number of personality traits, rather single traits that may predispose to criminality (Oliver, et al., 1993). However, the notion that personality is hereditary is assumed when using this research to attempt to prove that predisposition to crime is genetic. Bouchard (1994) states that the assumption that personality is genetic may stem from early twin studies which seem to overestimate the genetic influence on personality variation. Twin studies are conducted to compare concordance rates of monozygotic (MZ) or identical twins to dizygotic (DZ) or non-identical twins and attempt to make assumptions about how much of criminal behaviour has a genetic basis. ...read more.

Further, a positive and caring parent-child relationship, a stimulating home environment, and consistent disciplinary techniques were found to be correlated with a child's well-being. Garnefski and Okma (1996) found that development of criminal behaviour was correlated with poor family communication and weak family bonds. Abuse in childhood may also be an environmental risk factor which contributes to criminality. Widom (1994) suggested that childhood victimization may lead to the development of behavioural problems including impulsive behavioural styles which may lead to inadequate school and occupational performances. Adaptations to maltreatment, such as desensitization, may lead to personality disorders later in life. Such adaptations in a child may prompt a parent to react negatively towards this behaviour, leading to poor parenting practices and a negative parent-child relationship. Physical abuse may lead to bodily changes which allow a child to become desensitised to pain, and emotion, and this may continue into later life, becoming insensitive towards others and not feeling guilt or remorse. Widom (1994) found that that children who experienced abuse or neglect had a 50% increased risk of later engaging in criminal acts. In conclusion, there is not enough evidence to state that both biological and genetic factors are completely responsible for whether a person commits crime, or whether it is completely determined by environmental cues. It is therefore likely to be a combination of many factors whether an individual commits crime. Even if individuals have an elevated natural genetic predisposition, they may never engage in any criminal or anti-social behaviour unless they are exposed to the necessary nurture and environmental factors. ...read more.