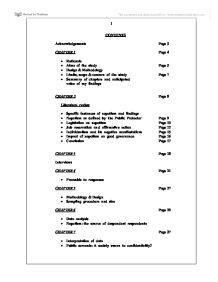 CONTENTS Acknowledgements Page 3 CHAPTER 1 Page 4 * Rationale * Aims of the study Page 5 * Design & Methodology * Limits, scope & concern of the study Page 7 * Summary of chapters and anticipated value of my findings CHAPTER 2 Page 8 Literature review * Specific instances of nepotism and findings * Nepotism as defined by the Public Protector Page 9 * Legislation on nepotism Page 10 * Job reservation and affirmative action Page 12 * Individualism and its negative manifestations Page 15 * Impact of nepotism on good governance Page 16 * Conclusion Page 17 CHAPTER 3 Page 18 Interviews CHAPTER 4 Page 21 * Preamble to responses CHAPTER 5 Page 27 * Methodology & Design * Sampling procedure and size CHAPTER 6 Page 29 * Data analysis * Nepotism: the source of despondent respondents CHAPTER 7 Page 37 * Interpretation of data * Public servants: A society sworn to confidentiality? CHAPTER 8 Page 40 * Limitations CHAPTER 9 Page 42 * Presentation and discussion of my findings * Conclusion Page 44 REFERENCES Page 45 ACKOWLEDGEMENTS I would like to thank the following people for the support they gave me throughout my research: * To all those who participated in my research project. * To Pretty Magangxa - for facilitating my academic relationship with Rhodes University. * To my family - for material support and continuous encouragement. * Mr. Nyanisile Jack - for his constructive assessment of my proposal. * Mr. Derek Mosenthal, my academic supervisor, without whose guidance I would not have been able to see my thesis through. CHAPTER 1 RATIONALE It is quite appropriate to mention that some Buffalo City citizens continue to see nepotism as one of the practices that hinder employment opportunities. Bisho civil servants, some of whom are the citizenry of Buffalo City, voiced their concerns on this matter. "Over the past five years (1998-2003), 27 percent reported witnessing political patronage (awarding jobs or contracts to political allies), and 33 percent felt they witnessed nepotism (awarding jobs or contracts to relatives)". ...read more.

There is also a need to bridge the gap between the needs of employers and qualifications of new graduates. For respondent B people needed to be equipped with skills and knowledge in order to create jobs for themselves. That will also enable them to compete in the job market. ANSWERS FROM POLICE SERVICES (BISHO) It is of significance that I first mention the ranks of respondents A & B as Inspector and Sergeant respectively. The following are the actual questions and answers: (i) Is recruitment properly monitored by management? The two respondents gave almost the same answers to the effect that the Area Commissioner's Office was the one that normally embarked on recruitment drives. Nepotism was therefore non-existent. Respondent B went further to say that their police station is a lower level one. New staff members are just introduced to them without any prior consultation. (ii) Does nepotism exist in your police station? Respondent A said nepotism did not exist in their police station. Respondent B was more forthcoming when he said that every police officer applied for promotion to the Provincial Commissioner, and that even if nepotism existed in their police station they would not know. (iii) If it exists, what are the causes and what form does it take? Both respondents said nepotism does not exist. Respondent B went further to say that they normally saw some members of staff being showered with preferential treatment when it came to transfers, e.g., if one was not in the good books of management, one would be transferred irrespective of the reasons advanced. (iv) Depending on the response, does it contribute to inefficiency, and bad service? For respondent A, nothing could be said because he felt nepotism did not exist. Respondent B felt that nepotism had a negative impact on service delivery. He cited preferential treatment as a kind of nepotism which led to demotivation amongst other members and underskilled persons being given senior positions. (v) Does your Police Station have a policy on nepotism? ...read more.

Nepotism has a negative impact on good governance in the sense that it creates a despondent workforce. Respondent B (p.23) of the Department of Social Development has since lost interest in applying for other positions within the department. Some administrative jobs were not adequately done because of incompetent staff. I wish to convey that Bisho public servants are aware that nepotism exists in their departments. The police have indirectly admitted to it, and were exposed by the SAPS evaluation services (p.28 & 29), the Correctional Services Department was exposed through the findings of the Jali Commission(p.30), and the Education Department was exposed through the findings of the Heath Special Investigation Unit (p.33). With regard to the Department of Social Services, and the unemployed graduates I have relied solely on their word for the purposes of coming to a finding. Although I have not been competent to provide empirical evidence regarding the allegations made by Social Development Department officials, and the two unemployed graduates, a reason to disbelieve them has proved elusive. CONCLUSION It appears as though the problems I experienced in the course of my research were brought about by the department's attempt to stifle legitimate criticism. For as long as the departments are infested with individualistic officials, government services will remain accessible only through official literature, a feature they deny in vain. Some government officials have a tendency to create controversy out of innocent inquiry in the sense that they 'declare' which areas of practice should undergo public scrutiny, and by so doing, they themselves become a threat to robust public debate. It is my recommendation that the public, together with government, create forums to minimize the possibility of civil servants becoming a closed society. The envisaged redemption of the public's potential to constructively criticise government should be realised. A persistent chasm between the public and the Bisho civil service will elongate the road to Utopia. ...read more.