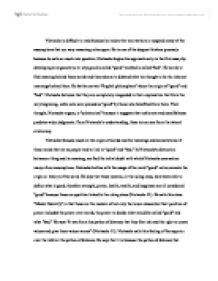 Nietzsche Genealogy of Morality. Nietzsche focuses much on the origin of words and the meanings and connotations of these words that we as people tend to link to good and bad.

Nietzsche is difficult to read because he insists that we overturn or suspend many of the assumptions that our very reasoning relies upon. He is one of the deepest thinkers precisely because he calls so much into question. Nietzsche begins his approach early in the first essay by developing an argument as to why good is called “good” and bad is called “bad”. He works to find meaning behind these words and then asks us to disband what we thought to be the inherent meanings behind them. He battles certain “English philosophers” about the origin of “good” and “bad”. Nietzsche believes that they are completely misguided in their explanation that from the very beginning, noble acts were praised as "good" by those who benefited from them. Their thought, Nietzsche argues, is "unhistorical" because it suggests that noble acts and unselfishness predates value-judgments. From Nietzsche’s understanding, these terms rose from the natural aristocracy.

Nietzsche focuses much on the origin of words and the meanings and connotations of these words that we as people tend to link to “good” and “bad.” In Nietzsche's distinction between a thing and its meaning, we find the initial doubt with which Nietzsche unravels so many of our assumptions. Nietzsche battles with the usage of the word “good” as he unravels the origin or history of the word. He says that these masters, or the ruling class, have been able to define what is good, therefore strength, power, health, wealth, and happiness are all considered "good" because these are qualities linked to the ruling class (Nietzsche 11). He calls this class “Master Morality” in that these are the masters of not only the lower classes but their position of power included the power over words, the power to decide what would be called "good" and what "bad." He says “It was from this pathos of distance that they first claimed the right to create values and give these values names” (Nietzsche 11). Nietzsche calls this feeling of the superior over the inferior the pathos of distance. He says that it is because the pathos of distance that 'good' and 'bad' first obtained their meaning. The masters saw qualities associated with the poor, unhealthy, weak, or incapable as undesirable so they call these “bad”.

However, descendants of the lower class began to resent being so powerless and they began to resent being bad. Their “ressentiment” toward the superior class resulted in a "radical revaluation of their values" (Nietzsche 17, 20). That is, 'good' and 'bad' began to exchange in meaning such that 'good' now applied to the common, low, poor and powerless, while 'bad' now applied to the superior, privileged, rich, and powerful. For the first parts of his first essay Nietzsche focused attentively on the origin of words, specifically “good” and “bad” to show how the history of the words have affected its connotation and meaning in our modern society.

The main idea behind Nietzsche’s arguments is to show how the origin of words can distort the way people see those words. Throughout the entire text, Nietzsche tells the reader that one should not simply accept what is told, rather we must go over, reevaluate, and protest that which does not seem fit for our well-being. The fact that Nietzsche’s writing is so complex is that it forces us re-read and continuously try to understand what exactly Nietzsche is expressing in his writing. Specifically, punctuation is critical in the text. The elaborate use of commas, colons, dashes, and exclamation points force the reader to go back, and try to put the sentences together in the mind so that it makes sense once read as a whole.

Section 13 of the first essay is very important in understanding Nietzsche. The focus is on a contrast between lambs and birds of prey, in order to understand the origin of the concept of "good" as born from ressentiment. It is quite natural that lambs may consider birds of prey to be evil, since they kill and carry off lambs. And from this, it may also be understandable that lambs consider everything unlike birds of prey, such as themselves to be good. All these points add to the argument of origin, which seems to be at the heart of the first essay. The meaning of “good” shifts depending on the perspective. So, the origin of the meaning of words, seem to arise from the perspective of which it’s seen. Therefore it makes sense that perspective is at the heart of the origin which is at the heart of Nietzsche’s argument.