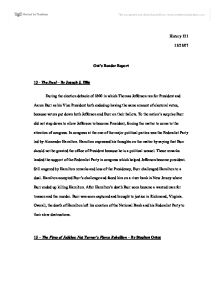 History 121 11/21/07 Oat's Reader Report 13 - The Duel - By Joseph J. Ellis During the election debacle of 1800 in which Thomas Jefferson ran for President and Aaron Burr as his Vice President both ended up having the same amount of electoral votes, because voters put down both Jefferson and Burr on their ballots. To the nation's surprise Burr did not step down to allow Jefferson to become President, forcing the matter to come to the attention of congress. In congress at the one of the major political parties was the Federalist Party led by Alexander Hamilton. Hamilton expressed his thoughts on the matter by saying that Burr should not be granted the office of President because he is a political weasel. These remarks landed the support of the Federalist Party in congress which helped Jefferson become president. Still angered by Hamilton remarks and loss of the Presidency, Burr challenged Hamilton to a dual. Hamilton accepted Burr's challenge and faced him on a river bank in New Jersey where Burr ended up killing Hamilton. After Hamilton's death Burr soon became a wanted man for treason and the murder. Burr was soon captured and brought to justice in Richmond, Virginia. ...read more.

Even though Jackson was praised as an American hero by many, legislators and John Quincy Adam considered him a liability because Jackson continuously disobeyed their orders. An example of Jackson's disobedience was that he was ordered to fight the Seminole Indians but not follow them into Florida. Jackson followed the Indians and created a path of destruction in Florida by killing British subjects, Indians, Spaniards, and forcing the Spanish governor to flee for his life. In 1824, Jackson was nominated by his fellow state Tennessee for the Presidency of the United States. Jackson won the election by the popular vote and a decision from House of Representatives. Then in 1828 while Jackson campaigned for a second term, his political rivals attacked his wife Rachael. Rachael became a big controversy during Jackson's reelection because she had never been officially devoiced from her former husband. These accusations then caused Rachael to become depressed and die. During these eight years of Jackson as President, the two party system was born and corruption flooded the government. 21 - The Trail of Tears - By Dee Brown In our history as Americans many agree that The Trail of Tears is one of the saddest and worst treatments of Indians. ...read more.

Tubman over came the 1850 law by relocating slave to Canada. During the times of the civil war and into the reconstruction Tubman still fought to help former slaves and fight a battle for women's rights. Summary Paragraph Overall, I enjoyed all of the articles that I reported on in the Oates Reader. However I honestly had hard time keeping my interest throughout the articles. I personally do not like to read and then write a report on what I read because I then tend to not enjoy the readings. Anyways my favorite article was The Duel by Joseph J. Ellis, because I have always been fascinated with the villainous Aaron Burr and his duel with Alexander Hamilton. I just cannot help wondering that if Hamilton had own the duel could he have been a future President (I know what you are thinking, he cannot be president because he was not born in the US, but congress might have made an exception.), if the National Bank would still be around, who would be on the ten dollar bill, and how the political party system would have been affected. My least favorite article was Growth of Technology by Peter L. Bernstein, because I really felt that I was going to fall asleep. I just did not care to read about or learn about early inventions, canals, and why it was so important. ...read more.