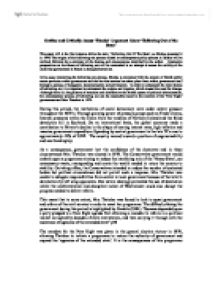 Outline and Critically Assess 'Rhodes' Argument About 'Hollowing Out of the State' This paper will in the first instance define the term, 'Hollowing Out Of The State', as Rhodes presented it in 1994. The origins of the hollowing out process related to contemporary policy process in Britain will be outlined followed by a summary of the themes and consequences identified by the author. Alternative perspectives on the theme of hollowing out will be contrasted in an attempt to assess the validity of the claim that government in Britain is being hollowed out. In his essay concerning the hollowing out process, Rhodes is concerned with the erosion of British public sector provision within government and the fact that erosion has taken place from within government itself through a process of delegation, decentralisation and privitisation. In order to understand the main themes of hollowing out, it is important to understand the origins and impetus, which created the need for change. Although there is a long history of transition and alteration to the British system of political administration, the contemporary process of hollowing out can be reasonably traced to the election of the 'New Right' government and Mrs. Thatcher in 1979. During this period, the institutions of social democracy were under severe pressure throughout the 1970's. Through growing power of pressure groups such as Trade Unions, Internal pressures within the Union from the troubles of Northern Ireland and the failed devolution bill in Scotland. On an international basis, the global economy made a contribution to Britain's decline in the shape of soaring interest rates, high inflation and massive government expenditure. Spending by central government in the late 70's rose to approximately 43% of GDP. The country moved toward a position of ungovernability and near bankruptcy. As a consequence, government lost the confidence of the electorate and in these circumstances Mrs. Thatcher was elected in 1979. The Conservative government would embark upon a programme aiming to reduce the interfering role of the 'Nanny State', cut unnecessary waste, overspending and create the wealth needed to return the country to stability. ...read more.

There are grounds to suggest that the difficulties incurred in 1979 are being incurred in 2000. These difficulties are potentially duplicated across the breadth of the policy network. The lack of adequate measures to ensure communication and co-operation increase innefiency and waste, in addition because the legislative process undertaken has been so complex, the drive for efficiency and cost cutting diminishes the room for maneuver within government departments or ministers. Rhodes highlights the problem as follows; "Such networks restrict who contributes to policy making and policy implementation. They routinise the policy process. They are also a form of private government". P148 In the latter point, Rhodes highlights a crucial outcome from the proliferation of agencies, accountability. If responsibility for implementation of government policy is too diverse then accountability and control are confused and disparate. The most notable example of confusion was highlighted by BBC 2's Newsnight, when Jeremy Paxman attempted to clarify the role of Home Secretary Michael Howard in the sacking of Derek Lewis who was Chief Executive of the Prison Service when high profile prisoners escaped from prison. It could be argued that little has changed when observing the recent debacle in the Scottish Executive over the delivery of examination results by the Scottish Qualifications Authority. Resignations have taken place from the agency whilst the minister responsible has moved to a new post. Accountability for politicians have shifted, they no longer resign, instead, they attend select committee hearings. The accountability and control of the policy process from parliament itself has been undermined. Rhodes uses the example of the dissolution of the Greater London Council to illustrate the point, "Under the Greater London Council (GLC), rate payers paid their rates to four bodies. After abolition of the GLC, they paid taxes to 17 bodies, two thirds of which are unelected " p148 Similar example exists in the case of Strathclyde Regional Council, which was dismantled on ideological grounds but in doing so further weakened democratic accountability. ...read more.

In other words, the state has been reshaped rather than hollowed out." P205 Here is the crux of the issue; much of the bulk of government, which was, portrayed as such a danger by Mrs. Thatcher in 1979 remains largely intact. Privitisation and quangocracies have not lessened the extent of government; rather they have helped to dismantle it to be put back together in a different order. This is evident in the move to the centre, if not the right of the political spectrum by the Labour Party in order to regain power. It could be argued that Mrs. Thatcher failed in her political aims of reduced government and strong state but was highly successful in her attempt to alter the ideological perspective of the British political landscape. She has ensured that the devide between the pragmatic actions of the conservatives and the collective actions of the socialists has been drastically reduced. The determining factor in this change is leadership and this is supported by Smith (1999) when he states that, "...leaders often have legitimacy, and the electoral and parliamentary support, to take to take authoritative decisions and therefor to orient the policy directions of networks" p243 The conclusion of this paper is that bearing in mind, the significance of an ideological origin to the process, there is strong evidence that the hollowing out of the state has and is continuing to take place. However it is doing so in conjunction with the restructuring of parliamentary structure and continuous adjustment of the actors and responses within the policy network. Only in this fuller sense can the hollowing out of the state be applied to the evolution of the policy process in Britain. What has remained constant or grown in strength throughout this process are the executors of power in the core of government. Although lines of accountability remain, the likelihood of recrimination for wrongdoing has become more unlikely and this is a cause for concern for the future. Both the hollowing out of the state and the strengthening of the core executive remain a matter of ongoing process. ...read more.