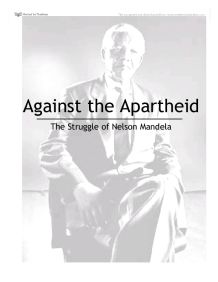 Outstanding Leader - Nelson Rolihlahala Mandela Content 1. Introduction Who is Nelson Rolihlahla Mandela 2. Analysis African National Congress and Mandela Important Quotes Core Message Background Impact on the Society 3. Discussion Vision of Mandela and Ethical Analysis Kantianism EToM References 1. Introduction - Who is Nelson Mandela Nelson Rolihlahla Mandela was born on July 18, 1918, to the principal councilor to the Acting Paramount Chief of Thembuland. Groomed to assume high post, he was sent to Healdtown, a Wesleyan school of repute, and eventually enrolled at the University of Fort Hare. Mandela entered politics while studying in Johannesburg, and joined the African National Congress (ANC) in 1942. During this time, ANC had a policy of non-confrontational dissonance to unpopular government policies. Disappointed with the inadequacy of such policy, Mandela, together with 60 young members of ANC, founded the African National Congress Youth League (ANCYL), where Mandela was elected Secretary. In contrast to ANC, ANCYL advocated a policy of petitioning through boycotts, strike, civil disobedience and non-cooperation. Though this policy was later accepted as the official ANC policy, it was only possible when Mandela and his peers took steps to replace the older ANC leaders, and to assume control of the National Executive Committee (NEC) of ANC in 1950. Throughout the fifties, Mandela was active in promoting freedom, education, equal rights and opportunities for the black Africans in South Africa. Because of these subversive activities, he was subjected to many forms of repression and was banned, arrested, and imprisoned during large parts of the decade. ...read more.

As stated in the quote, he lived for the ideal, and could simply not accept any deflections from this ideal, even when he was offered early release from jail and freedom. Finally, his reconciliation with white Africans, despite spending almost thirty years in prison, truly fulfilled his vision for South Africans to live together in harmony and with equal opportunities. He has strived to create an ideal society where neither white nor black dominate. Describe the social context for this statement (actors, interests, constraints). Limit your description to the two or three actors, and the constraints under which they interact, that are most critical. The statement was made on the April 20, 1964, when Nelson Mandela was defending himself in the Rivonia trial after being charged with sabotage. The two main actors associated with the statements are the white dominated Apartheid government and the black dominated ANC represented by Mandela. The ANC represented by Nelson Mandela, took up an armed struggle against the Apartheid government. Its interest is to force the Apartheid government to recognize the existence of black Africans, and to give equal rights and opportunities. Their constraints are limited funding for their movement, and the lack of military capabilities for their armed struggle. Furthermore, their efforts were not fully supported by the mass black population, who were unwilling to sacrifice their lives or jobs for an uncertain cause. After all, most among the black population do not believe that uprisings can be successful. The white population who has populated and controlled South Africa for many generations dominated the Apartheid government. ...read more.

companies closing down their operations, and banks stopped offering state loans. In addition, violence in the region escalated and insecurity increased. In the late 1980s South Africa was subjected to huge international pressure and the government realized that apartheid had never been a viable strategy. Eventually, they dismantled the apartheid structure, initiated official negotiations with ANC, and later recognized it as a legal political entity. At the same time, Mandela managed to persuade ANC to abandon their armed struggle against the apartheid government. He showed both parties that they could move from a zero-sum perspective to a positive-sum perspective, thus escaping the social trap and achieving a win-win situation through cooperation. The foundations of future multi-racial democracy were set. Despite terrible provocation, Mandela has never answered racism with racism. <Reference> 90 Years of Struggle, A brief overview of ANC history http://www.anc.org.za/ancdocs/pubs/umrabulo/umrabulo13f.html "I am Prepared to Die" Nelson Mandela's statement from the dock at the opening of the defense case in the Rivonia Trial, Pretoria Supreme Court, 20 April, 1964 http://www.anc.org.za/ancdocs/history/mandela/1960s/rivonia.html Biography of Nelson Mandela http://www.anc.org.za/people/mandela.html Address by Nelson Mandela on behalf of the ANC delegation to the conference of the Pan-African freedom movement of East and Central Africa, Addis Ababa, January 1962 Interview to Anthony Sampson (a British journalist), FRONTLINE: The Long Walk of Nelson Mandela http://www.pbs.org/wgbh/pages/frontline/shows/mandela/interviews/sampson.html Interview to Richard Stengel (Senior Editor, Time Magazine), FRONTLINE: The Long Walk of Nelson Mandela http://www.pbs.org/wgbh/pages/frontline/shows/mandela/interviews/stengel.html Nelson Mandela and the Rainbow of Culture by Anders Hallengren http://www.nobel.se/peace/articles/mandela/index.html Mandela: A tiger for our time, published in the Mail & Guardian, Vol.15, No.22, 4 June 1999 Free Nelson Mandela http://www.anc.org.za/ancdocs/history/campaigns/prosoner.html TIME 100: Leaders & Revolutionaries - Nelson Mandela, by Andre Brink http://www.time.com/time/time100/leaders/profile/mandela.html ?? ?? ?? ?? 2 ...read more.