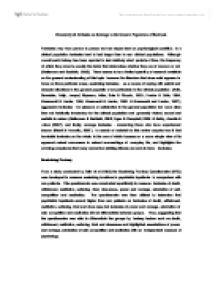 Personality &amp; Attitudes on Revenge in the General Population of Scotland

Personality & Attitudes on Revenge in the General Population of Scotland. Fantasies vary from person to person and are dependent on psychological condition. In a clinical population fantasies tend to last longer than in non-clinical populations. Although overall each fantasy has been reported to last relatively short periods of time, the frequency of which they occur is usually the factor that determines whether they are of concern or not (Gellerman and Suddath, 2005). There seems to be a limited quantity of research available on the general understanding of this topic however the literature that does exist appears to focus on three particular areas, sustaining fantasies - as a means of coping with painful and stressful situations in the general population but particularly in the clinical population (Zelin, Bernstein, Heijn, Jampel, Myerson, Adler, Buie & Rizzuto, 1983; Harder & Zelin, 1984; Greenwald & Harder, 1994; Greenwald & Harder, 1995 & Greenwald and Harder, 1997); aggressive fantasies - for pleasure or satisfaction in the general population but more often than not habitually involuntary for the clinical population and generally violent, sexual and sadistic in nature (Gellerman & Suddath, 2005; Egan & Campbell, 2009 & Selby, Anestis & Joiner (2007), and finally, revenge fantasies - concerning those who have experienced trauma (Mardi & Harowitz, 2007). In search of material for this review surprise has it that homicidal fantasies on the whole is the one of which focuses on a more simple view of its apparent natural occurrence in natural surroundings of everyday life, and highlights the evolving acceptance that many normal law abiding citizens can and do have fantasies. Sustaining Fantasy From a study conducted by Zelin et al (1983) the Sustaining Fantasy Questionnaire (SFQ) was developed to measure sustaining functions in psychiatric inpatients in comparison with non-patients. This questionnaire was constructed specifically to measure fantasies of death, withdrawal, restitution, suffering, God, closeness, power and revenge, admiration of self, competition and aesthetics. ...read more.

Such were, sensational topics, general personality traits, and self-reported physical aggression. They found relationships between sensational interests and physical aggression, regardless of gender. Personality and the application of negative sustaining fantasies significantly forecast physical aggression. When the SFQ was reduced to three higher order factors; positive, negative, and narcissistic sustaining fantasies, correlations were found between neuroticism (N) and both positive and negative sustaining fantasies, although the association was stronger for negative fantasies. There were small associations between positive sustaining fantasies and indirect non-physical hostility although these relations were humble, and openness (O) was a stronger predictor. Narcissistic sustaining fantasies related to low levels of agreeableness (A), replicating associations between low A and narcissism generally. Ultimately proposing that aggressive and hostile persons are more stimulated by violent stimuli and that isolation is a further risk-increasing factor for aggressive interests. Following on from this conclusion of risk-increasing factors, attention was directed back a few years in literature to a study conducted by Gellerman & Suddath (2005). They discussed risk-increasing factors in relation to questioning at what point would a health professional perhaps become concerned with a person's fantasy enough for it to become their duty to forewarn or protect others from potential dangerousness, or even attempt to protect the person from them self. In the health profession an evaluation of dangerousness includes not only asking about violent fantasies but also asking about physical and sexual content (Gellerman & Suddath, 2005). Gellerman and Suddath (2005) looked at the conditions in which the disclosure of violent fantasies to a mental health professional may generate cause for concern and a duty to warn or protect other citizens. Reviewing legal cases in which violent fantasies were considered in the context of measuring potential dangerousness and the literature available on homicidal and sexually violent fantasies in both non-incarcerated and criminal populations was also examined. It was concluded that no dependable predictive relationship between violent fantasies and wickedly hazardous behaviour was reported in the available literature and suggestions of issues that mental ...read more.