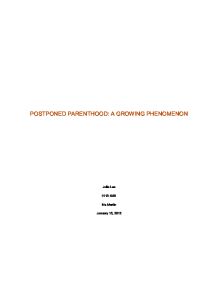 Postponed parenthood: A modern phenomenon. Childbearing later in life is a growing phenomenon in modern society. 25-35 years of age is considered the optimal age of women to begin childbearing (Canadian Institute for Health Information, 201

POSTPONED PARENTHOOD: A GROWING PHENOMENON Julie Lee HHS 4M0 Ms Martin January 15, 2012 Table of Contents Introduction 1 Research 3 Definition of the Problem 3 Causes 4 Effects on the Parents 5 Effects on the Children 6 Application of Conceptual Frameworks 7 Discussion and Interpretation 10 Conclusion 11 Appendix 12 Works Cited 14 Introduction Childbearing later in life is a growing phenomenon in modern society. 25-35 years of age is considered the "optimal" age of women to begin childbearing (Canadian Institute for Health Information, 2011). From 1995 to 2003, the mean maternal age of Canadian women increased from 28.8 to 29.6 years (Benzies, 2008). In addition, the proportion of live births to women aged 35-39 years has increased from 4.7% to 14.5% (Lisonkova et al., 2009). As of 2007 in Canada, almost one in three women who had their first child were 35 or older (Gordon et al., 2012). There are many risks involved with this decision, including health complications during pregnancy, increased risk for stillbirth and increased rate of infertility. The health problems are not limited to the mother; children born to older fathers have reduced fertility and increased risk of some cancers, as well as schizophrenia and congenital heart defects (Bray et al., 2006). However, families with an older first childbirth have more psychosocial benefits. In a study of 495 men without biological children, men aged 35-45 years were less likely to cite the need for financial security as the reason for delayed parenthood (Roberts et al., 2010). Older parents are known to be more financially secure, more nurturing, more emotionally stable themselves, and more likely to stay together (K�hler, 2009). They are also likely to be healthier and make better lifestyle choices than younger parents (Wilson, 2005). In addition, each year of delay in the timing of a woman's first birth brings a 3% increase in wage rates, and a 10% increase in earnings (Buckles, 2008). ...read more.

As a result, later-born children feel pressure to accelerate their own "timetable" to accommodate prescribed norms, such as marrying and having children earlier than wished (Ibid). Application of Conceptual Frameworks Functionalism Postponed parenthood is supported by aspects of functionalism, as the parents of later-born children fulfill their duty to society through their careers, then have children to further this benefit to society. In addition, postponed parenthood may involve adoption of kids if the mother is infertile. Older parents would therefore fulfill several functions of society, and thus benefit society as a whole. Feminism A feminist perspective would strongly endorse the idea of postponed parenthood. Although there are many risks to advanced maternal age, it allows women to fully develop their careers before starting their family. Postponed parenthood also places far less pressure on women to leave their job to have children early in life and, in doing so, incur a long-term wage penalty. In addition, this means both individuals in a relationship can focus on their careers, then equally distribute the time for childbearing, rather an unequal load following "gender norms". Erik Erikson's psychosocial development However, through Erik Erikson's stages of development, postponed parenthood has many disadvantages. The initial stage of development, trust vs. mistrust, benefits from postponed parenthood as the parents have more time and financial security to bond with their child (Anderson, 2011). However, as noted earlier, the parents are not as energetic as other parents, and thus may not be able to fulfill the need for play and constant response. In stage four, industry vs. inferiority, the problems start to arise as the children need to establish strong relationships with their peers. This may be difficult due to the age gap of their parents, and as noted earlier their relatives will be noticeably older. Stage five with identity vs. role confusion is possibly the most troubling of stages for the later-born child. ...read more.