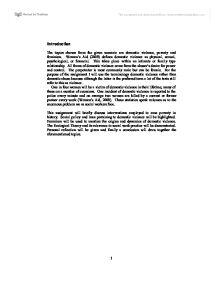 Poverty and Domestic Violence. This assignment will briefly discuss interventions employed to ease poverty in history. Social policy and laws pertaining to domestic violence will be highlighted. Feminism will be used to mention the origins and dynamics

Introduction The topics chosen from the given scenario are domestic violence, poverty and feminism. Women's Aid (2009) defines domestic violence as physical, sexual, psychological, or financial. This takes place within an intimate or family type relationship. All forms of domestic violence come from the abuser's desire for power and control. The perpetrator is most commonly male but can be female. For the purpose of the assignment I will use the terminology domestic violence rather than domestic abuse because although the latter is the preferred term a lot of the texts still refer to this as violence. One in four women will be a victim of domestic violence in their lifetime; many of these on a number of occasions. One incident of domestic violence is reported to the police every minute and on average two women are killed by a current or former partner every week (Women's Aid, 2009). These statistics speak volumes as to the enormous problem we as social workers face. This assignment will briefly discuss interventions employed to ease poverty in history. Social policy and laws pertaining to domestic violence will be highlighted. Feminism will be used to mention the origins and dynamics of domestic violence. The Ecological Theory and its relevance to social work practice will be demonstrated. ...read more.

The acknowledgment of violence in families was over 150 years ago when The Act for Prevention and Punishment of Aggravated Assaults on Women and Children 1853 and the Offences Against the Person Act 1861 (McKie, 2005). The first legal recognition in recent history was given to domestic abuse and the women's need to escape from violence in their homes with the introduction of The Domestic Violence Act 1976 (Pascall, 1997). Interagency collaboration is essential when working in the area of domestic violence. Working Together provides comprehensive and detailed guidance for professionals (Department for Education and Skills, 2006). To protect the victim of domestic violence the Protection from Harassment Act 1997 is in place which can be used to protect someone from behaviour which causes psychological injury. The Domestic Violence, Crime and Victims Act 2004 extend this power (Brayne and Carr, 2008). The Adoption and Children Act 2002 was amended to include the definition of harm, which now states 'impairment suffered from seeing or hearing the ill treatment of another'. Those vulnerable because of domestic violence or the threat of violence are given priority for housing according to the Homeless Act 2002 (Alcock, 2008). Chung et al (2001) reported that the government suggested to gp's to consider routinely screening women for domestic violence to try and increase rates of identification. ...read more.

My personal opinion about domestic violence has not changed over the years. Although, I have recently recognised and accept the relationship between low self esteem and domestic violence. I had a fortunate upbringing and my father always instilled in me the importance of having self respect first and foremost when meeting people. I did have a friend who was subjected to domestic violence but she did not confide in me until her boyfriend had left her for another woman, which I told her was a blessing for her. The thought of someone being violent towards another human being makes me feel sick and I can not comprehend what motivates anyone to abuse another person. Conclusion This assignment has explored domestic violence, poverty, history and politics in relation to poverty. Policies and laws were mentioned which protect those subjected to domestic violence. Feminism was discussed, the ecological theory was briefly applied to domestic violence and an explanation was given to its relevance to social work. Finally, I reflected on my own thoughts and feelings in relation to domestic violence. Having completed this assignment and read widely on the subject of domestic violence I feel this is an emotive area which requires much empathy and support. I believe the most important qualities when working with this issue is to be the victims advocate and empower them on their terms. ...read more.