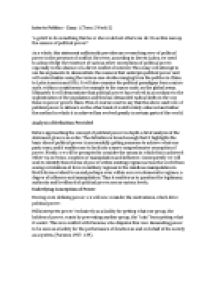 Power. A gets B to do something that he or she would not otherwise do. Does this sum up the essence of political power?

﻿Intro to Politics ? Essay 1 (Term 2 Week 5) ?A gets B to do something that he or she would not otherwise do?. Does this sum up the essence of political power? As a whole, this statement sufficiently provides an overarching view of political power in the presence of conflict. However, according to Steven Lukes, we need to acknowledge the existence of various other conceptions of political power, especially in the absence of a direct conflict of interest. This essay will attempt to use his arguments to demonstrate the nuances that underpin political power and will contextualize using the various case studies ranging from the politics in China to Latin America and USA. It will also examine the political paradigms from a micro scale, within a constituency for example to the macro scale, on the global arena. Ultimately it will demonstrate that political power has evolved in accordance to the sophistication of the population and this has demanded radical shifts in the way those in power govern them. This of course is not to say that the above said view of political power is defunct, on the other hand, it is still widely enforced and rather the method in which it is achieved has evolved greatly in certain parts of the world. Analysis of Definition Provided Before approaching the concept of political power in depth, a brief analysis of the statement given is in order. The definition is broad enough that it highlights the basic idea of political power in successfully getting someone to achieve what one party ones, and it enables one to look into a more comprehensive conception of power. Firstly, we will be prompted to consider the means in which this is achieved either via coercion, cooption or manipulation and influence. Consequently we will seek to identify these forms of power within existing regimes across the world from seeing correlations of force in military regimes to the insidious manipulation in North Korea evident to us and perhaps even within our own democratic regimes, a degree of influence and manipulation. ...read more.

The public's concern is about the military's intervention in politics. The ultraliberals are frustrated; they want far more rapid movement toward civil control, but even many people in the center are worried. And certainly the Islamists have been worried about the way the military is moving, which was obviously evident in the demonstration on Friday that they called for. What we see here is the effect of education and information influencing the lifespan of a particular type of political power. We will see that this becomes a trend as we progress along with the other dimensions of power. (INTERVIEW: http://www.cfr.org/egypt/egypts-military-rule-dilemma/p26565) 2D View Bachrach and Baratz critique this view and argue that it is restrictive and in virtue of that fact, gives a misleadingly sanguine pluralist picture of American politics. Power, they claim has two faces. The first face is that already considered, according to which 'power is totally embodied and fully reflected in "concrete decisions" or in activity bearing directly upon their making' (1970: 7) Of course power is exercised when A participates in the making of decisions that affect B. Power is also exercised when A devotes his energies to creating/reinforcing social and political values and institutional practices that limit the scope of the political process to public consideration of only those issues which are comparatively innocuous to A. To the extent that A succeeds in doing this, B is prevented, for all practical purposes, from bringing to the fore any issues that might in their resolution be seriously detrimental to A's set of preferences. (p.7) This conception of power involves creating an environment, which attempts to control the interests or limit the scope of interests that the other party may have. Their central point is this: 'to the extent that a person or group - consciously or unconsciously = creates or reinforces barriers to the public airing of policy conflicts, that person or group has power' (p.8) ...read more.

This is why threats like Julian Assange?s WikiLeaks are extremely dangerous to the stronghold of such states. Consider the reactions to the WikiLeaks crisis by the governments and contrast it to that of the people. As a population or the person being subjugated gets influenced by the masses especially if we consider the impact mass media and new media has had on our new generation as a consequence of globalisation ? the spread of information can no longer be curtailed and hence this form of coercion cannot last. SOFT POWER: If we consider the case of America, it has gradually and consistently reasserted its claim on the global stage through institutions such as the UN and WTO and the WB. By creating attractive foreign policies etc. it has not only spread its realm of control but reasserted and reaffirmed its claims. Although currently its power is being contested with China, ultimately the deep rooted cultural and ideological beliefs of America have been too deeply ingrained across the globe to have it completely upheaved. The indirect way of getting what you want without tangible threats or payoffs "second face of power" - country may obtain the outcomes it wants in world politics because other countries - admiring its values, emulating its example, aspiring to its level of prosperity and openness - want to follow it. This soft power - getting others to want the outcomes that you want - co-opts people rather than coerces them Soft power rests on the ability to shape the preferences of others Personal level: power of attraction and seduction Community level: get others to buy into your values Soft power is a staple of daily democratic politics Soft power uses a different type of currency (not force, not money) to engender cooperation - an attraction to shared values and the justness and duty of contributing tot eh achievement of those values. ...read more.