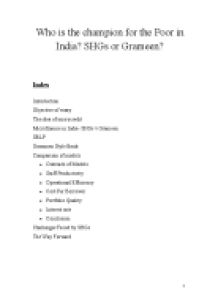 Provision of Microcredit in India. Who is the champion for the Poor in India? SHGs or Grameen?

ï»¿Who is the champion for the Poor in India? SHGs or Grameen? Index Introduction Objective of essay The idea of microcredit Microfinance in India- SHGs v Grameen SBLP Grammen Style Bank Comparison of models 1. Outreach of Models 2. Staff Productivity 3. Operational Efficiency 4. Cost Per Borrower 5. Portfolio Quality 6. Interest rate 7. Conclusion Challenges Faced by SHGs The Way Forward Introduction Microfinance has been hailed as the panacea to solving rural poverty in the 21st century. Microfinance however had a humble beginning in the 1970s when Professor Mohammed Yunnus lent $27 USD to 42 women in a remote village of Bangladash. Only 30 years later, the Grameen Bank he started has 3.2 million borrowers, 1,178 branches, services in 41,000 villages and assets of more than $3 billion[1]. I first started to take an interest in microfinance when I visited a village in remote Buriram Province of Thailand. The village underwent a major transformation after it joined the Village Development Partnership organized by the Mechai Viravaidya Foundation. The programe was based on a microcredit scheme that lent loans to the villagers to engage in productive activities. It may seem cliché to say instead of handing the poor a fish on a plate, it is more useful to give them a fishing road. However once you walk into one of the villages transformed by microcredit, you really do feel that microcredit is more than just talk. What left me with a deep impression is seeing first-hand how micro-credit has a real impact on the villagers. In the village of Nong Phulong, many villagers have taken up loans to raise silk worm and weave silk clothes. Some villagers have even started a motor bike repair shop or started a recycling business. This has been an important additional source of income to the villagers in addition to cultivating their land. This source of income is especially important to them during the drought season, which helps carry them to the next harvest. ...read more.

A too high rate would defeat the purpose of microfinance to provide affordable credit to the poor, while a too low rate would render the MFI unsustainable. Interest earned on portfolio has been the major source of income for the microfinance sector. Interest rates offered by MFIs on loans varied from MFIs, certain MFIs offer flat rates while others calculate interest on a declining balance basis. Many MFIs also take upfront charges like processing fee which adds to the overall income from portfolio. For the purpose of analysis, the Annual Percentage Rate (APR), which includes interest, fees and commission is used. The interest rate is then calculated into an annualized figure on the loan principle. From the figures it can be seen that the Grameen MFIs charge a higher interest rate in comparison to the SHGs. This can be explained by the higher operational cost of the MFIs and its legal structure. A higher interest rate is needed by Grameen MFIs to become self sufficient. Moreover it has to be noted that there is an ever increasing amount of for profit microfinance institutions adopting the Grameen model[19]. The SHG model on the other hand has been mainly operating on the grant of NARBARD and by the not-for-profit entities. Moreover the operational costs of SHG model are relatively lower, allowing room for lower interest rates. Sustainability of Organization Ultimately MFIs have to be self sufficient to be less susceptible to external shocks such as a decrease in donor funds. Only then can it be able to expand healthily and sustain itself with proving credit to a growing number of poor. Operational Self Sufficiency (OSS) measures the ability of an MFI to meet all its operational and financial costs out of its income from operations which includes subsides and grants. Financial Self Sufficiency (FSS) measures however exclude the calculation of subsidy in its income. Therefore FSS is the approximate indicator to assess whether an MFI is sustainable or not. ...read more.