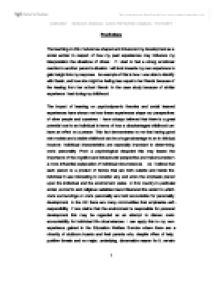 The teaching on this module has shaped and influenced my development as a social worker in respect of how my past experiences may influence my interpretation the situations of others.  If I start to feel a strong emotional reaction to another person’s situation I will look towards my own experience to gain insight into my response.  An example of this is how I was able to identify with Sarah, and how she might be feeling less equal to her friends because of the teasing from her school friends in the case study because of similar experience I had during my childhood.

The impact of learning on psychodynamic theories and social learned experiences have shown me how these experiences shape our perspectives of other people and ourselves. I have always believed that there is a great potential cost to an individual in terms of how a disadvantaged childhood can have an effect on a person. This fact demonstrates to me that having good role models and a stable childhood can be a huge advantage to an individual, however, individual characteristics are especially important in determining one’s personality. From a psychological viewpoint this may lessen the importance of the cognitive and behaviourist perspective and make humanism a more influential explanation of individual circumstances.   As I believe that each person is a product of factors that are both outside and inside the individual it was interesting to consider why and when the emphasis placed upon the individual and the environment varies. In this country in particular social, economic and religious variables have influenced the extent to which one’s surroundings or one’s personality are held accountable for personality development. In the UK there are many communities that emphasise self-responsibility. If one claims that the environment is responsible for personal development this may be regarded as an attempt to disown one’s accountability for individual life circumstances. I can apply this to my own experience gained in the Education Welfare Service where there are a minority of stubborn truants and their parents who, despite offers of help, punitive threats and no major, underlying, discernable reason for it, remain defiant and resistant to all attempts to re-engage children with their rightful education.  As a social worker I would adopt a holistic approach to client-centered therapy utilising a combination of cognitive, behavioural and psychodynamic approaches, theories and perspectives.  This approach should acknowledge the impact of interpersonal conflict, family dysfunction, hostile environment, trauma of death, loss and grief, physical dysfunction and medical illness, substance abuse and environmental stressors including poverty and prejudice without attempting to disown accountability for individual life circumstances.

“Thus to use psychology appropriately in social work requires a flexibility of approach, and updating of knowledge, and evaluations of psychological theory and a willingness to review and change the way social work uses psychology” (Collins Dictionary of Social Work, 2002:30).

In the case study both Aiden and Paul have used illegal drugs. The reason young people themselves give taking drugs are peer pressures, parent’s marital problems, divorce or alcohol abuse,  as shown in the case study.  Also boredom, such as those who see little value in school or have access to few leisure activities – sometimes they are brighter than average but have poor relationships with teachers. Loneliness, a lack of family cohesiveness and poor parent-child relationships are at the root of this problem. Substance misuse within inner cities, in broken homes and already abusing families suggests a connection between social factors, psychological stress and the misuse. (Hamlin M, 1993:91). Some of these indicators are clearly demonstrated in the case study and are most likely to be the triggers of the substance abuse for both Paul and Aiden.

Their sister Sarah is experiencing conflict at school from her peers and is becoming increasingly body conscious “for female’s value and affirmation is conferred by society with reference to appearance and the ideal female body shape.  Here then is the vehicle through which females can express their conflicts and confusions through their body shape”. (Lewis, V and Blair A, 1993:26).  At her age adolescent’s are most likely to conform to their peer group, therefore there is a risk that Sarah may develop an eating disorder because she has internalised the criticisms from her friends at school, and may have trouble coping with the situation at home.

Peter has recently shown aggressive behaviour towards Maureen and It has come to light that he witnessed his own father’s aggression as a child.  The implications are that Paul has been in the same situation with his own father before Peter and both and Aiden and Paul are at risk of witnessing aggression from Peter.  This is a concern because Farrington (1991)  cited in Malim and Birch (1998:751) found strong correlations between aggression in childhood and adulthood.  Farrington also postulated that there were seven factors involved in delinquency:  All  of the above factors are part of the family makeup in the case study. Hyperactivity

As a social worker Choi (1998) suggests that you might address some of the issues identified using community organisation skills to mobilise residents into grassroots organisations, and where violence is an issue nonviolent conflict resolution skills can prove beneficial.  Through various psychoeducational methods individuals and groups can be trained to build appropriate communication, social and problem solving skills as alternatives to aggression.

Cairns-Descoteaux (2002) explains that in families where there is domestic violence the client will often have been abused as a child or adolescent.  The coping strategies they develop may be effective in handling the feelings associated with past abuse and current relationship issues. However, some of the strategies may be either ineffective, or harmful to the client or others. Some of the ineffective coping strategies may be alcohol and drug abuse, self-mutilation, eating disorders, suicidal ideation or attempts, risk-taking sexual behavior, aggressive or abusive behaviors towards others, and antisocial behaviour.  Several members of the family in the case study are displaying these behaviours that may be at best ineffective and at worst harmful to themselves or others.  Applying cognitive and behavioural theories to the problems with aggression this family is facing would attempt to curtail the cycle of abuse, trauma and aggression.  If a client is unable to control their anger, as in the case study with Peter and Aiden, it may be possible to apply cognitive behavioural therapy (CBT) so that this anger is effectively managed.  Ronen (2002) makes the key points that CBT involves changing people’s way of thinking, feeling and behaving and is a dynamic model for helping people to change and acquire self-help skills.

Tackling the issues of drug and alcohol abuse within this family can be approached from several angles that each of the psychological schools of thought would answer differently. Behaviourist psychologists think that the external environment shapes the individual which, means that excessive drinking is considered to be a form of learned behaviour. The way to change operant behaviour is to offer an incentive to stop excessive drinking through systems of reward and punishment. Malim and Birch (1998:24) criticise behaviourist therapies because they can be ‘mechanistic’ and that they ‘overlook the realm of consciousness and subjective experience’. If the behaviour is due to classical conditioning then the individual associates drinking with temporary relief from anxiety and they need disassociate drinking with stress and use other methods of relaxation and reward.  A cognitive approach would predict that by associating drinking to negative thoughts and not drinking with positive thoughts it is proposed that they are likely to stop abusing alcohol.  Cognitive psychologists would explain drinking as being part of an individual’s cognitive map or thinking processes. It is a type of behaviour that comes from within the mind. In order to stop individuals drinking it is proposed that one needs to have a cognitive restructuring of the individual’s thinking processes via cognitive counselling. A further criticism of cognitive therapy is that the client’s problem behaviours or thoughts are always changed to those, which the therapist sees as being acceptable. Malim and Birch (1998:801) question whether it can always be the case that the therapist has the correct perspective on the world and that the client’s cognitive outlook is in need of total change.

Psychoanalysts consider that conscious thoughts are influenced by what is within the unconscious mind for examples drinking is considered to be a conscious fixation resulting from a repressed unconscious experience. In the case study Peter has recently start drinking more and we know that he is concerned he will repeat the abusive behaviour he witnessed as a child from his own father.  The conscious act of drinking is a means of releasing this repressed thought and the way to resolve this fixation is to have psychodynamic counselling whereby the counsellor can help the client to resolve the conflict between unconscious and conscious thoughts.  The Collins Dictionary of Social Work (2002) declares that “the psychodynamic approach was widely criticised in later decades for lacking a way of addressing the social origins of problems”. There may be a tendency to examine a client’s current difficulties as reflections of deeper problems of unsatisfactory relationships and to overlook the very real dilemmas of current relationships or environmental pressures. (1556)

Cairns-Descoteaux, B (2002) THE JOURNEY TO RESILIENCY FOR VICTIMS AND SURVIVORS OF FAMILY VIOLENCE <http://psychstudies.net/Contemporary%20Issues%20in%20Domestic%20Violence%20and%20Child%20Abuse.pdf >[accessed on 12th March 2007]