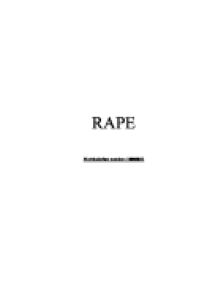 Rape. This project will introduce rape as a crime using common definition, statistics and academic literature. Secondly will use feminist theories and explain the rape, providing theories strengths and weaknesses.

RAPE Matriculation number: 10008032 Violent crimes as a phenomenon have been accompanying the history of humanity. They have been described in various written sources from Egyptian, Babylonian to Bible. Nobody has an answer to what causes violent crime, but a multitude of theories exist, ranging from criminological to biological. Violence and violent crimes permeate nearly every part of our life. Rape is one of those crimes that particularly interest society because they are disturbing, unusual and enchaining people's emotions and thinking. Today rape is a serious problem affecting millions of people throughout the world. It is driven by many factors from social to cultural. Rape as a violent crime is now recognized as a threat to development, peace and security; a violation of human rights; a crime under international law. This project will introduce rape as a crime using common definition, statistics and academic literature. Secondly will use feminist theories and explain 'the rape', providing theories strengths and weaknesses. Thirdly will identify different penal sanctions for the offence and will discuss their effectiveness. Rape has been a common event through history. It has been in films, art, literature and even theatre. Rape was in early civilizations when men showed their domination, power and claim of ownership on women by abducting and forcibly raping them. In middle ages it was common to abduct and rape rich women (heiress stealing) to force them into marriage. In 19 century when societies and economy developed forcible rape was forbidden by law (Siegel, 2009). There are a lot of definitions of rape both legally and within legends of different cultures and stereotypes. Rape by common laws (latin rapere - to take by force) is defined as penetration of the vagina, anus or mouth by the penis or by an object used by the attacker without the consent of the victim (Bacik, Maunsell & Gogan, 1998). In common sense rape is a forcible, non-voluntary sexual intercourse that male performs against a woman he does not know (Siegel, 2009). ...read more.

Rapist can be 'unselfish' and 'selfish'. Unselfish rapist will show verbal, physical and sexual concern for the victim trying to convince victim to cooperate. Often, rapist will ask "Am I hurting you?" or "Are you cold?" during the rape. These types of rapists are most likely to reveal unnecessary and revealing information about themselves and are inadequate about risk. The selfish rapist is violent and brutal towards the victim. To him victim is like a doll or mannequin which he uses for self satisfaction. Victims complains, discomfort, pain, tears do not disturb him. Almost any spontaneous comments made by victim will be met by force and threats (Groth, 1979). A number of authors have created typologies of rapists. According to Knight and Prentky (1987) and McKibbin et al. rapists can be divided to 5 groups: disadvantaged men, power assertive rapists, anger - retaliatory rapists, high mating effort rapists and partner rapists. Disadvantaged men or power reassurance rapists includes men who suffer from extremely low self-esteem and feelings of inadequacy. They are perceived as less attractive and less desirable men and are motivated to rape if they have no other way of mating (McKibbin et al. 2008). Often these rapists are from single parent home, have low educational level, are quiet, passive loners who usually live with an aggressive and controlling mother/father, have no friends and no girlfriend/boyfriend. These rapists are verbally and sexually 'unselfish' because they do not tend to hurt the victim but trying to increase their self esteem through the control of another person. Another type of rapists are called power assertive rapists. For these types of rapists expression of virility and personal dominance is the most important thing. Usually they are arrogant, athletic, stylish, loud, work in male dominated place (police) and have a history of domestic problems or multiple divorces. It is common for these types of rapists to use a moderate level of violence (both physical and verbal) ...read more.

and rehabilitation (to make offender a better person, like counseling, drug treatment, etc.). Sanctions are effective because they exact retribution to victim by imposing deserved punishment to rapist in proportion of his blameworthiness (Banks, 2009). Moreover penal sanctions help to increase public safety by reducing re-offending keeping rapists in prison, supervising them closely, giving treatments for conditions associated with their criminal behaviour or deterring potential rapists by given penalties (Tait, 2001). Although sanctions for rape look adequate but they have limitations too. One of them is that although prison sentences provide the ultimate weapon for deterring repeat offender and provide shock value for first time offenders but on the other hand there is a high rate of individuals re-offending when released from prison because when released they don't know how to live normal anymore. Furthermore by providing starting sentence point for crime like rape it can allow judges to impose sentence based on their values, philosophies, opinions, even sexist views which can lead to disparate treatment of similarly situated defendants (one judge might impose a long prison sentence while another might decide that average sentence would be enough) (Marcus, 1994). To conclude this project introduced rape in general, explained feminists view on rape, provided strengths and weaknesses of feminist perspective, identified sanctions for rape and viewed their effectiveness. To resume rape is the non-voluntary sexual intercourse that offender performs against victim. According to feminists patriarchy is a root cause of rape because it gives men power and an excuse to control and dominate women. Although feminists recognized the relationship between rape and the power and dominance structure between the genders but they are focusing on societal rather than individual level portraying men as homogenous group. Rape is punishable crime and sanctions are adequate and effective but also have few limitations like usefulness of prisons or judges right to impose sentence according to his opinion and values. ...read more.