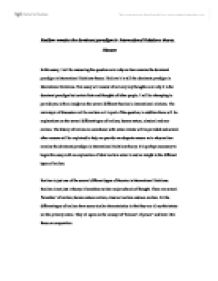 From this time, each realist has contributed in some way to the realist cause. Machiavelli with 'The Prince', where he demonstrated the ruthlessness which a ruler should display so that the security of the state could be protected.3 Realism since 1919 possessed a 'history' which will arguably span over many years and more importantly have a history that no other theory will have. The realist world view is that we live in an anarchical society, with those with power, rule. Whether people like it or not, that is how the world is. This reality must be confronted. Therefore by having a systematic view of the world detailing the conflict and unrest among states, realism portrays a familiar patterned and rigidly ordered framework of understanding, which is thus realist in nature.4 The change in political climate is one reason as to how realism has survived as a theory for so long and thus been so dominant. The period of crisis and prolonged uncertainty between 1930's and mid 1950's; provided the space for realism to fill. This period supplied realism with a space to expand its principles and secure a foundation from which it could assume its position as the dominant paradigm in international relations.5 Also on many occasions throughout the past century, realism has always had an answer to major events occurring. ...read more.