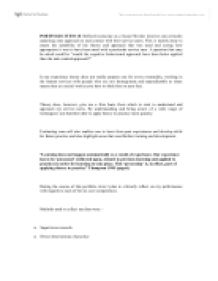 Reflective practice as a Social Worker

PORTFOLIO ITEM 10: Reflective practice as a Social Worker involves one critically analysing ones approach to and contact with their service users. This is mainly done to assess the suitability of the theory and approach that was used and seeing how appropriate it was to have been used with a particular service user. A question that may be asked could be "would the cognitive behavioural approach have been better applied than the task centred approach?" In my experience theory does not totally prepare one for every eventuality, working in the human services with people who are not homogenous and unpredictable at times means that as a social worker you have to think fast on your feet. Theory does, however, give me a firm basis from which to start to understand and approach my service users. By understanding and being aware of a wide range of techniques I am therefore able to apply theory to practice more quickly. Evaluating ones self also enables one to learn from past experiences and develop skills for future practice and also highlight areas that need further training and development. "Learning does not happen automatically as a result of experience. Our experience has to be 'processed' (reflected upon, related to previous learning and applied to practice) in order for learning to take place. This 'processing' is, in effect, part of applying theory to practice" Thompson 1995 (page6). During the course of this portfolio item I plan to critically reflect on my performance with regards to each of the six core competences. Methods used to collect my data were: - ? Supervision records ? Direct observations of practice ? ...read more.

This helped me to understand how these needs differed from that of a statutory organisation to which I was more familiar with. At each meeting I was able to identify any future goals. Opportunities were also available to attend training days relevant to the work undertaken at the centre. Through discussion with my practice teacher and supervisor and my implementation of two proformas (appendix items nine and four) I was able to solve problematic dilemmas with communication between the agencies involved with the young people. The information and the induction I received (appendix 8) enabled me to have more awareness of the organisations policies and procedures. At times as I was still in the early stages of learning how to approach the young people I didn't feel I had enough strategies developed for dealing with the young people who were displaying unsociable behaviour and hence had to discuss this in supervision and also observe other staff on the programme. I feel that at time I could have altered the young peoples perception of me as a worker and in turn led them to increase unsociable behaviour. This however was not the case, but I felt this was an area I needed to greatly improve upon. Coming from an educational employment perspective and having a sister who is a qualified teacher now working for another reducing disaffection team, I am aware of the difficulties that can be encountered by teachers when attempting to control large groups of young people and maintain an undisrupted session for the pupils who are displaying unsociable behaviour. ...read more.

The meeting that took place at the end of the programme enabled us to develop and implement the ideas and wishes of the young people. This will hopefully lead to a service for young people developed by young people. The recent suggestion of running more groups for females in the near future was particularly important especially as NACRO researchers have identified that between 1993 and February 2001 the population of female prisoners had increased by 145%. This recent report, which will be released 4th April 2001, will have a great impact on the importance of the developing these groups for youth activities and crime prevention work with females in the Wolverhampton area. This work will also educate society and challenge the traditional stereotypes that society has regarding men committing most crimes. I found the sessions where I discussed my value base quite uncomfortable at first particularly as I did not know my practice teacher as well as I usually would someone with whom I would explain my values in such depth. This first hand experience was positive and it helped me to increase my understanding of how vulnerable my service users will feel when I am interviewing them and talking about intimate/personal matters, especially when they may not know me well. Feedback (from both my practice teacher and my supervisor) on all of the core competencies has been good. I feel my previous work experience both as a developmental delay therapist and acting co-ordinator at my previous place of employment has enabled me to utilise skills learnt there to my new endeavours. I plan to build upon these skills during my next placement. ...read more.