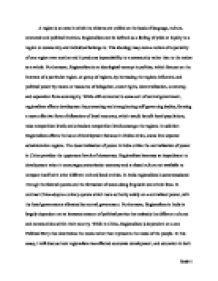 Regionalism in China and India. In India regionalism is accommodated through the federal system and the formation of states along linguistic and ethnic lines. In contrast China adopts a unitary system which rests authority solely on a centralized power,

A region is an area in which its citizens are unified on the basis of language, culture, economic and political interests. Regionalism can be defined as a feeling of pride or loyalty to a region or community and individual belongs to. This ideology may stem a notion of superiority of one region over another and it produces dependability to a community rather than to the nation as a whole. Furthermore, Regionalism is an ideological concept in politics, which focuses on the interests of a particular region, or group of regions, by increasing the regions influence, and political power by means or measures of delegation, states' rights, decentralization, autonomy, and separation from sovereignty. While still connected to some sort of central government, regionalism affects development by promoting and strengthening self-governing bodies, forming a more effective form of allocation of local resources, which would benefit local populations, raise competition levels and stimulate competition levels amongst the regions. In addition Regionalism affects the issue of development because it divides cities, states into separate administrative regions. The decentralization of power in India unlike the centralization of power in China provides the uppermost levels of democracy. Regionalism becomes an impediment to development when it encourages protectionist economy and a closed culture not available to compare itself with other different cultural local entities. In India regionalism is accommodated through the federal system and the formation of states along linguistic and ethnic lines. In contrast China adopts a unitary system which rests authority solely on a centralized power, with the local governments allocated by central government. Furthermore, Regionalism in India is largely dependent on an immense amount of political parties that embody the different cultures and communities within their country. While in China, Regionalism is dependent on a one Political Party that determines the needs rather than represents the needs of the people. In this essay, I will discuss how regionalism has affected economic development, and education in both India and China. ...read more.

Therefore, it results from the appropriate balance between shared rule and self-rule. The need for federalism is enhanced in countries with ethnically distinct regions where the territorial accommodation of distinct groups of people is of paramount importance.19 In addition, India's federal system has been able to accommodate ethnically distinct regions because it is based on the recognition of differences. The Indian people have confidence in regional parties because they believe that they alone can defend the interests of the State concerned and can fight for the legitimate rights and powers of the States without being constrained by their association with a national party. Regional parties naturally concentrate on protection and promoting regional interests and they do not affect larger interests of the country. It is also significant that in the Lok Sabha a regional party (Telegu Desam) now forms the largest opposition group. Some measures taken for states in India involve the constitutional provisions. This was created for the creation of new states in India. The Indian federation, constitutionally speaking, is an indestructible union of destructible states. The Indian Constitution (Articles 3-4) empowers the Union Parliament (Lok Sabha (popularly elected Lower House, and Rajya Sabha, the Council of States) to reorganize the states for territorial adjustment. It is provided that Parliament may by law: (1) Form a new state by separation of territory from any state, or by uniting two or more states, or parts of states, or by uniting any territory to a part of any state;(2) Increase the area of any state; (3) Diminish the area of any state; (4) Alter the boundaries of any state; and (5) Alter the name of any state etc.20 Among the causes of the growth of regionalism is prolonged maladministration and neglect of an area or State by the Central, Government. There has been a creeping disappointment against Central rule. Regional symbols, regional culture, history and in many cases a common language, all promote regionalism. ...read more.

keep up with the mandated educational expansion, and the requisite increased school fees made things difficult for the poor for many years. Bardhan suggests that educational disparities increased in the reform period, and differential schooling has now become a major source of widening class division in China. 37 However, In China private schools have been growing rapidly, especially secondary Education in urban areas which is funded by the central government. China suppresses regionalism because of its one unified government. Furthermore, The Asian Financial crisis has affected regionalism in china by restoring a greater degree of political power and autonomy.38Chinas economic regionalism displays how economic wealth can create considerable differences between regions, including the distribution of wealth and the means in which the regions are governed. The states and provinces answer to the one single government power in control in China. This shows that China has maintained its national unity. Regionalism in India is largely dependent on an immense amount of political parties that embody the different cultures and communities within their country. While in China, Regionalism is dependent on a one Political Party that determines the needs rather than represents the needs of the people. Regionalism has positively affected economic development in China and negatively in India. Economic development in India has been difficult because of all the parties involved. In China Economic development has flourished due to the one political party in power. Regionalism has also had a big affect on India and Chinas education systems. We can see the economic inequality among different regions within their countries. Overall, the way China has handled the differences within their states has contributed to their effectiveness in implementing policy changes and economic reforms. In India, Regionalism has been a success through the countries cultural and linguistic differences in creating proper accommodations and unity among the different regions. However, Both China and India have been subjected to the negatives that come from Regionalism: This is something inevitable in any country with large populations such as theirs. ...read more.