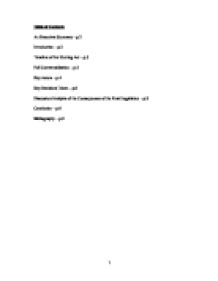 Table of Contents An Executive Summary - p.2 Introduction - p.2 Timeline of the Hunting Act - p.3 Full Contextualisation - p.3 Key Actors - p.4 Key Decisions Taken - p.6 Discussion/Analysis of the Consequences of the Final Legislation - p.8 Conclusion - p.8 Bibliography - p.9 An Executive Summary of the Report This report aims to assess in great detail all the issues that surrounded the Hunting Act 2004, analysing both the issues that lead to the Act and the current debate as the issue is still largely contested. Firstly, the report will provide a brief historical background of the issues of hunting and the main moral and ethical arguments put forward from both anti-hunting and pro-hunting supporters. The report will then move on to discuss the key role played by opposing pressure groups in the passing of the legislation, and display the ways in which the key interest groups succeeded in keeping the issue of hunting on the political agenda. These key actors will be analysed alongside other key actors ranging from political parties and Members of Parliament to the media. The main decisions made leading to and during the legislative stages shall also be examined in-depth before a discussion on the consequences of the Act. The report shall conclude that it was mainly as a result of the influence of the pro-hunting pressure groups and the views of hunting held by the Labour Party that the bill finally gained Royal Assent through the use of the Parliament Act by the Government. ...read more.

Lord Terrence Burns chaired the Burns Inquiry into fox hunting, and this report concluded that the activity of hunting compromises the welfare of the fox (Burns et al 2000 p15), however, it also stated that a hunting ban would be unlikely to result in an increase in fox numbers, which is consistent with a study done by Baker et al (Baker, Harris & Webbon 2003 p400). The House of Lords is a major actor in policy formulation, and it used its power as a major actor to constantly reject the Commons proposal of a hunting ban, often sending back lengthy amendments against the basis of the Hunting Bill (Lords Reasons for Insisting on Certain Lords Amendments and Amendments in Lieu of Other Lords Amendments to Which the Commons May Have Disagreed to the Hunting Bill, HL Bill, 2004). The CA plays a pivotal role in its attempt as an 'outsider' interest group to lobby MPs and organising marches to show opposition to the ban on hunting (Wallwork & Dixon 2004 p24). It was through these marches and demonstrations that the CA becomes the major opposition to the policy formulating process. Pro-hunting media was responsible for contributing the success of the 'Liberty and Livelihood' March organised by the CA, but ultimately failed in their attempts to get the hunting ban thrown off the agenda. Pro-hunting media, such as the Daily Telegraph (Edwards 2010) and the Daily Mail, were also responsible at covering the campaign for the "countryside and the rural way of life" (Anderson 2006 p733), as well as putting forward arguments in favour of hunting, such as to "control the spread of disease" (Heydon & Reynolds 2000 p237). ...read more.

More recently, the debate has meant that hunting has yet again been put on the political agenda, but this time to revoke the 2004 Hunting Act, this is something that is heavily contested with the forthcoming promised free vote in Parliament in 2010 (Sinclair 2010). The way it has shaped the British countryside is that it has cemented the Conservative hold over the 'hunting populations', and has there have been numerous convictions of people hunting illegally, such as in 2007 there were 48 prosecutions (Campbell 2009). Conclusion To summarise, this report has displayed the various key actors in the implementation of the Hunting Act 2004. These include a vast number of MPs, mainly from the Labour Party, the Houses of Parliament, and two very influential pressure groups, the CA and the LACS. The report has also shown the key decisions taken throughout the legislative stages of the bill and the role that the aforementioned actors played in ensuring that these decisions were or were not taken. The hunting ban in 2004 has been widely viewed as one of the most key examples of difference and argument between the Commons and the Lords. It has also illustrated the difference in lifestyle between those of the rural and urban populations, with each side arguing that the others argument is morally unjust. This difference has also given birth to two main interest groups, both of which have large media support, and it is without doubt that the CA and the LACS will continue to contest one another as long as this issue remains on the political agenda, and will undoubtedly generate a significant debate and controversy in 2012 when the free vote is scheduled for. ...read more.