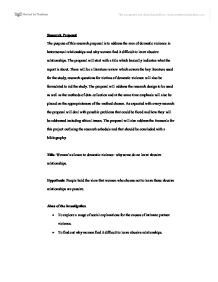 The main reason for using the self-completion questionnaire is that they are considered as a way of recording values, attitudes and behaviours of the targeted population and the data is generated in a systematic manner by providing the respondents with the same questions and recording their responses in a methodical manner15 . Also they are reliable in that they eliminate the differences in the way the questions are phrased and how they are presented to the respondents. The questionnaire will record the respondent's experiences of intimate partner domestic violence and find out basic background information on why women stay in abusive relationships. At this stage particular attention will be paid to ethical and safety issues that come with intimate domestic partner violence. The questionnaire will contain a statement assuring the respondents of confidentiality alongside a secret code number to ensure anonymity. I am aware of the drawbacks that come with this type of quantitative method which may include non response by some respondents. The questionnaire will include a covering letter explaining the aims of the research, its importance and why the recipient has been selected and most importantly it will feature guarantees of confidentiality. The questionnaire will be accompanied by a reply stamped addressed envelope and there will be a follow up on individuals who do not respond approximately three weeks after the first mailing16. This should improve the response rate and from then respondents will be called in for an in depth interview. ...read more.