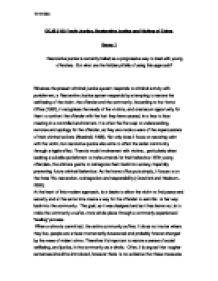 Restorative justice is currently hailed as a progressive way to deal with young offenders. But what are the hidden pitfalls of using this approach?

CCJS 2103 Youth Justice, Restorative Justice and Victims of Crime Essay 1 Restorative justice is currently hailed as a progressive way to deal with young offenders. But what are the hidden pitfalls of using this approach? Whereas the present criminal justice system responds to criminal activity with punishment, a Restorative Justice system responds by attempting to restore the well-being of the victim, the offender and the community. According to the Home Office (1997), it recognises the needs of the victims, and creates an opportunity for them to confront the offender with the hurt they have caused, in a face to face meeting in a controlled environment. It is often the first step to understanding, remorse and apology for the offender, as they are made aware of the repercussions of their criminal actions (Marshall, 1996). Not only does it focus on restoring calm with the victim, but restorative justice also aims to affect the wider community through a ripple effect. There is much involvement with victims, particularly when seeking a suitable punishment to make amends for their behaviour. With young offenders, the ultimate goal is to reintegrate them back into society, hopefully preventing future criminal behaviour. As the home office puts simply, it focuses on the three R's; restoration, reintegration and responsibility (Crawford and Newburn, 2003). At the heart of this modern approach, is a desire to allow the victim to find peace and security and at the same time create a way for the offender to earn his or her way back into the community. ...read more.

As well as this limitation, in more recent years there has been an emphasis on privacy and autonomy, which has led to social divides in cultures and in particularly, between age divides. Newburn explains that age plays a large role in the debate on punishments, due to changes over time in laws, social acceptance and expectations. For example, people who are older and were exposed to the death penalty may believe in harsh sentences, or 'eye-for-an-eye' resolutions, whereas younger people may opt for community orders, less severe punishment and more on rehabilitation, for example. As restorative justice aims to support communities, there must first exist a stable community. With young offenders, it is understandably important to halt deviant behaviour and help the offender regain a socially acceptable way of life, to maintain a safe community, as well as to help reintegrate the offender back into a life they can thrive in. It is also important with young offenders that they take responsibility for their actions, to create strong moral grounds on which to hopefully continue to grow (Newburn 2007). Recently, restorative justice interventions have been applied in youth justice policies and programmes. These include pre-court disposals, such as final warnings; court disposals, such as rehabilitation or training orders; and referral and reparation orders. Restorative youth justice programmes focus on enabling the young offender to take responsibility for their behaviour and restore them into a mainstream life, whilst enabling victims to actively participate in the restorative justice process. ...read more.

It was funded by the government aimed at discovering 'what works' in reducing crime and reoffending. The principle aim of this study was to identify which element or combinations of elements in restorative justice are most effective at reducing crime. There were different schemes in place for offenders and victims in different counties. They concluded that each county was diverse in their understanding of the notion of restorative justice, and also in their degree of focus on victims and offenders (Miers 2001). The overall conclusion taken from this was a lack of support through funding, suggesting that restorative justice could work, with a healthy support system and funding. As Strang (2001) explained, 'we do not know yet very much about how effective the restorative approach may prove to be in reducing re-offending; this is especially difficult to estimate when programs are mostly directed at a population of offenders whose offences are minor and criminal careers brief. Large claims of 'successes among those who may never have re-offended anyway confuse and distract policymakers". He is stating that the participants in restorative justice tend to be people to have committed less severe crimes, and would not necessarily have re-offended anyway. He suggests that a larger sample be looked into, using offenders who have committed severe crimes, maybe even serial offenders, to broaden the validity and reliability of the results. In conclusion, as McElrea (1994) suggested, although this process gives the victim a powerful role in the community and a role in the decision making process for the community as a whole, restorative justice requires manipulation, refinement and above all, funding and support to even start examining its effectiveness Wright, 1991). ...read more.