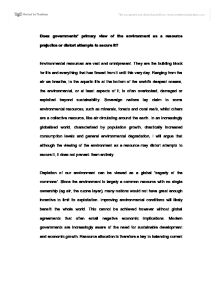 Does governments’ primary view of the environment as a resource prejudice or distort attempts to secure it?

Environmental resources are vast and omnipresent. They are the building block for life and everything that has flowed from it until this very day. Ranging from the air we breathe, to the aquatic life at the bottom of the world’s deepest oceans, the environmental, or at least aspects of it, is often overlooked, damaged or exploited beyond sustainability. Sovereign nations lay claim to some environmental resources, such as minerals, forests and coral reefs, whilst others are a collective resource, like air circulating around the earth. In an increasingly globalised world, characterised by population growth, drastically increased consumption levels and general environmental degradation, I will argue that although the viewing of the environment as a resource may distort attempts to secure it, it does not prevent them entirely.

Depletion of our environment can be viewed as a global ‘tragedy of the commons’. Since the environment is largely a common resource with no single ownership (eg air, the ozone layer), many nations would not have great enough incentive to limit its exploitation. Improving environmental conditions will likely benefit the whole world. This cannot be achieved however without global agreements that often entail negative economic implications. Modern governments are increasingly aware of the need for sustainable development and economic growth. Resource allocation is therefore a key to balancing current consumption, and hence benefits, with future existence. In classical economic terms, “sustainability and economic growth are more or less compatible” (Redclift, 1999), as long as resources under threat are properly protected. Although scientific in nature, the latter point carries a certain degree of subjectivity in so far as that for many complex scientific statements, contradictive evidence is often presented, be it at the time or at some future date. What scientists once thought of as sustainable, clearly fits a new context in today’s terms. Herman Daly (1992) suggests that “sustainable growth is an oxymoron”.

It must be recognised that the environment is ‘not defined in a cultural vacuum’ (Redclift, 1999). There exists a myriad of environmental issues that would be very difficult to be tackled simultaneously. Each nation must first consider the problems that are most plaguing to them. Redclift (1999) notes that poorer countries are faced with the more basic of needs (adequate food, water, etc) whilst industrialised nations consider the ‘largely invisible’ threats (eg, global warming). The issue of developing nations and the environment poses rather challenging problems, not only for them having ‘little incentive to endorse global objectives above meeting the more immediate needs of their own people’ (Redclift, 1999). This type of nation is generally plagued by corruption, resulting in an inability for the government to enforce many aspects of law, particularly when large, multi-nation companies are involved. Jacoby, Prinn and Schmalensee (1998) provide an example, stating that even if industrialized nations completely ban the use of fossil fuels, it will do little to bring global carbon emissions within acceptable levels if developing nations continued to increase their use. Therefore, if environmental issues are to be given unanimous, global support, common ground must first be reached.

Litfin (1999) identifies a ‘growing awareness’ of the world towards ecological sustainability in promoting world order. However, the way in which this awareness is viewed and acted upon is not so clear. A traditional approach to national security focuses around military enforcement, evidenced to this day by the large sums of money and resources it consumes.[1] Militarizing environmental problems, such as population growth representing a national security threat due to illegal immigration would be considered ‘suspect at best and dangerous at worst (Deudney 1990), creating an “us-verse-them” attitude. Litfin (1999) argues, ‘with significant caveats’, that environmental security should be managed in a way which ‘decentres both the state and coercive power’, characterised by ‘declining utility of force’, as well as increased involvement of non-government organisations (NGO’s) and participation in multilateral environmental treaties.

It is only since the 1970’s that concerns for the environmental have emerged as global issues, somewhat coinciding with the phenomena of Globalisation (Litfin, 1999). It is now widely recognised that due to the cross-border nature of many environmental problems, a ‘greening of world politics’ (Litfin, 1999) is necessary, especially when the environment is looked upon as a function of demand (increased consumption, population growth, etc). The issue at hand is therefore, how best to tackle environmental issues whilst honouring sovereignty and its core principle of non-intervention. The addition of ‘Green clauses’ into international aid packages could be one way forward. Litfin (1998) observes that sovereignty ‘seems to be undergoing a transformation in response to a host of functional problems and interdependencies’. It could be argued that the “erosion-of-sovereignty” thesis together with the rising power of NGO’s as the ‘driving force behind efforts to cope with ecological problems’, could actually undermine the ability of the state to secure precious world resources. On the other hand, transnational NGO’s may be in the unique position of streamlining environmental treaties, successfully lobbying them to multiple states and hence bringing about an even greater unified front.

Litfin writes ‘The quest for security, depending upon how it is approached, can perpetuate environmental insecurity’ (Litfin 1999), citing the ‘toxic and radioactive legacy’ of the Cold War. However, global insecurity may arise if states do not correctly manage the environment. How then to achieve this fine balance on a micro scale (i.e. within each state) and then too on a world level? Litfin (1999) identifies two factors, facing developed nations in particular. Firstly, it is apparent that environmental degradation, and hence insecurity, is a direct result of ones quest for material security. Secondly, true environmental costs are often “hidden” in far away places, most likely a developing nation or surrounding ecosystem, or passed on to future generations. There is somewhat good news in that developed nations appear to be on a path that looks like the beginning of environmental awareness. For the environmentally conscious state, wishing to impose their views unto others, they must decide what the best avenues available are. Important to note as well is the idea that States rendered insecure by environmental crisis might respond in a variety of potentially unnerving ways (Del Rosso 1995). A simplified example may consist of a particular state exploiting a vital natural resource, possibly water. They may then resort to encroaching on a neighbouring nation in order to satisfy the needs of their people. For this reason, it is in the best interests of all states to be ‘environmentally conscious’. Returning to how best to respond, it has become clear that the military is not a useful tool. Traditional diplomacy with increased economic penalties may be an opportunity. The most viable however, may lie in the utilisation of supernational agencies, such as trading blocks or world banks. The European Unions (EU) move to ‘harmonize environmental standards among its members’ (Litfin 1998)together with multilateral development banks (MDBs) attaching a “green conditionality” to loans for developing nations may represent one of the greatest steps forward on the world platform.

NGOs as well as larger developed nations should take heed in their attempts to impose environmental standards upon the world so as not to come across as global imperialists, out to control the world’s scarce resources. ‘Whether the environment is seen primarily as a source of conflict or cooperation’ (Litfin, 1999) will be a direct result of the path taken. In conclusion, the viewing of the environment as a resource will not in itself distort attempts to secure it. Properly recognised consequences of future environmental degradation should entice governments into providing measures to secure it. Whether or not those measures are sufficient in future terms is an argument that cannot yet be ruled upon.