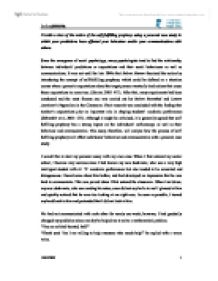 Provide a view of the notion of the self-fulfilling prophecy using a personal case study in which your predictions have affected your behaviour and/or your communications with others.

Since the emergence of social psychology, many psychologists tend to find the relationship between individuals’ predictions or expectations and their social behaviours as well as communications. It was not until the late 1940s that Robert Merton theorised the notion by introducing the concept of self-fulfilling prophecy, which could be defined as a situation occurs when a person’s expectations about the target person eventually lead actions that cause those expectations to come true. (Kassin, 2001: 477). After that, many experiments had been conducted and the most famous one was carried out by Robert Rosenthal and Lenore Jacobson’s Pygmalion in the Classroom. Their research was concluded with the finding that teacher’s expectations play an important role in shaping students’ academic performance (Schneider et al, 2005: 217). Although it might be criticised, it is generally agreed that self-fulfilling prophecy has a strong impact on the individuals’ self-concept, as well as their behaviour and communication. This essay, therefore, will analyse how the process of self-fulfilling prophecy will affect individuals’ behaviour and communication with a personal case study.

I would like to start my personal essay with my own case. When I first entered my senior school, I became very nervous since I had known my new desk-mate, who was a very high intelligent student with all ‘A’ academic performance but also tended to be conceited and disingenuous. I heard some about him before, and had developed an impression that he was hard to communicate. This was proved when I first entered the classroom. When I sat down, my new desk-mate, who was reading his notes, even did not say hello to me! I glanced at him and quickly noticed that he was also looking at me right now. As soon as possible, I turned my head back to him and pretended that I did not look at him.

We had not communicated with each other for nearly one week; however, I had gradually changed my prediction since one day he helped me to solve a mathematical problem.

“Thank you! Yes I am willing to help everyone who needs help!” he replied with a warm voice.

“Really?” I was so surprised, “but don’t you know in other’s view, you not easy to communicate?”

“But why did you never say any words to me when we first met each other?”

“Oh…I looked at you, but you just turned back you head, I predicted that you were not willing to talk to me!” he said, “and every time when I meet someone, they just do as what you do, and I think I must be an unwelcome guy and don’t want to communicate with them.”

This is a typical case of how self-fulfilling prophecy shapes the expectations or predictions and thus shapes communicational behaviours. As Passer and Smith (2001: 522) claims, the self-fulfilling prophecy first begins with a false expectation held by the perceiver and thus, influences the behaviours of the perceiver towards the target person. As it mentioned previously, I hold a prediction that my new desk-mate is a very conceited man and hard to communicate. This prediction, either conscious or unconscious, deeply embeds into my impression, and therefore, strongly influences my attitudes as well as the behaviours towards that person (Aronson et al, 2005: 68). For example, when my new desk-mate tried to communicate with me, I just turned back my head and refused to start the conversation. To conclude, it is pointed that the perceiver’s prediction can influence the behaviours of the perceiver towards the target person.

However, the predictions do not only alter the behaviours of the perceivers, but also has a further impact on the behaviours of targets. Brehm, Kassin and Fein (2005: 126) all agree that the behaviours of the perceiver will definitely leads to a situation that the target person responds it in a particular manner unwittingly according to the perceiver’s actions. My new desk-mate, who wanted to talk to me, realised that the pressure climate and thereby stop the communication, which exactly proved my false prediction. This responsive behaviour, however, accordingly strengthens the false predictions of the perceiver and makes the perceiver to believe that his or her prediction is definite correct, according to Passer and Smith (2001: 522). Absolutely, as Aronson, Wilson and Akert (2005: 71) argue, perceivers may be satisfied that the outcomes are exact the same as they have predicted but seem to neglect their role in producing these situations. To summaries, self-fulfilling prophecy has the strong impact on both the perceivers and targets’ behaviours by three steps: firstly people have an expectation about the other person, which then influences how they act toward that person, which then causes that person to behave consistently with the original predictions, and finally makes the expectation come true.

It seems to be accepted that self-fulfilling prophecy has a strong influence on interpersonal communication since it may not only cause the misjudgements of people and situations, but also can limit the achievements of others and create the very realities we most fear, as Kerick, Neuberg and Cialdini (2005: 75) claims. I, for example, may find trouble in communicating with my new desk-mate, which is the situation I most fear, and my new desk-mate, will also response to my behaviours which pushes our relationship into a further bad situation. However, critiques also cited with the notion that most of the self-fulfilling situations seem to be temporary since their many external factors can strongly influence the cycles of processes of self-fulfilling prophecy, according to Brehm, Kassin and Fein (2005: 127). For example, perceivers may become more objective towards the target persons when they are highly motivated to seek the truth (ibid.). Similarly, if the target persons gradually realise the false predictions on them, they would like to manage to overcome the predicament that forced the perceivers to abandon their false predictions (hilton & Darley, 1985, cited with in Brehm, et al). In fact, with the further communication after several days, I gradually realised that I had formed a wrong impression and prediction on my new desk-mate and he also realised my false prediction and tended to force me to abandon it with his friendly actions.

However, the effects of self-fulfilling prophecy seems to be controversial, since many sociologists argue that positive self-fulfilling prophecy may contribute to the self-concept and self-esteem, helping the person to achieve his or her potential and improve the communication (Adler and Rodman, 2003: 55). Here I want to continue my stories in my senior school. As we communicated with each other further, we had developed much closer relationship than before. Sometimes we helped each other willingly. For example, I was not good at mathematics, my desk-mate, always helped me to solve several problems. He always encouraged me, and my mathematical teacher, always gave me more opportunity to respond in class and more supports. Gradually, I tended to be more confident about my mathematics and had a positive prediction that I could do well in mathematics. At the final exam, I got a high mark.

This is another type of self-fulfilling prophecy, which is called self-imposed prophecies, as Adler, Rosenfeld and ProctorII (2004: 37) indicate. It is agreed that self-imposed prophecy has the capability to shape people’s self-concept and motivate people to achieve their expectations about themselves. In my personal case, with the encouragements of my desk-mate and teacher, I gradually seem to be more confident than before and therefore, have a more positive expectation about my academic performance. This positive prediction, therefore, has changed my behaviours consciously or unconsciously to achieve the goal, according to Schneider, Gruman and Goutts (2005: 217). For example, I was worked harder than before during that period and tended to be eager to solve mathematic problems. However, Adler and Rodman (2003: 55) argue that self-imposed prophecy cannot be simply considered as the ‘power of positive thinking’. They both agree that self-imposed prophecy is one of many approaches for you to stimulate and motivate your potentials, therefore, if you do not have the capability to achieve your prediction, it will not come true. Besides, they also argue that several negative self-imposed prophecies may lead to bad situations in communication. For example, people may expect to be nervous and botch a job interview and that negative prediction will come true (ibid.: 54). Nevertheless, it is clear that self-imposed prophecy, as one kind of self-fulfilling prophecy, can strongly shape the individual’s behaviours and therefore, affect the communication eventually.

To conclude, self-fulfilling prophecy has a strong impact on individuals’ behaviours as well as communication. It is clear that a perceiver’s expectation or prediction will definitely alter the target person’s behaviour towards the previous expectation and thus affect their communication eventually. Besides, a person’s prediction also can alter his or her own behaviours towards the original expectation, which will therefore bring it about. It seems to be a psychological effect imposed either by yourself or by others that provides an approach for individuals to achieve their own expectations or predictions. It also has an impact to shape the individuals’ self-concept and self-esteem, which plays an important role in interpersonal communication. However, critically it is arguable that self-fulfilling cycle can be broken up if the perceiver can realise his or her false prediction or the target person can force the perceiver to abandon his or her false prediction. Besides, the effects of self-fulfilling prophecy will be eliminated if we can communicate with others objectively.