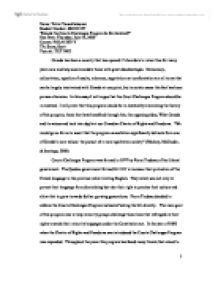 Should the court challenges program be re-instated

“Should the Courts Challenges Program be Re-Instated?”

Canada has been a country that has opened it’s boarders to minorities for many years now and help accommodate those with great disadvantages.  Democracy, collectivism, equality of results, tolerance, negotiation not confrontation are all terms that can be largely intertwined with Canada at one point, but in certain cases this fact has been proven otherwise.  In this essay I will argue that the Court Challenges Program should be re-instated.  I will prove that this program should be re-instated by examining the history of this program, those that have benefited through this, the opposing sides, What Canada and its values and look into depth at our Canadian Charter of Rights and Freedoms.  “We would go so far as to assert that the program cancellation significantly detracts from one of Canada’s core values- the pursuit of a more egalitarian society” (Mackay, McGruder, & Jennings, 2009)

Courts Challenges Program was formed in 1977 by Pierre Trudeau of the Liberal government.  The Quebec government formed bill 101 to increase their protection of the French language in the province while limiting English.  They intent was not only to protect their language from diminishing but also their right to practise their culture and allow that to grow towards further growing generations.  Pierre Trudeau decided to enforce the Courts Challenges Program instead of testing the bill directly.   The main goal of this program was to help minority groups challenge those laws that infringed on their rights towards their minority languages under the Constitution act.  In the year of 1982 when the Charter of Rights and Freedoms was introduced the Courts Challenges Program was expanded.  Throughout the years this program has faced many threats that aimed to eliminate it. On 2006 of September, Stephen Harper of the Conservative minority government came into power and decided to take out this program in its first government budget.  Bertha Wilson a former Supreme Court of Canada Justice stated, “under the Canadian Charter of rights and freedom the courts have become mediators between the state and the individual.” (Brodie, 2001)  This does not mean that the individual decisions are taken away but that in many situations people have different perspectives and a mediator like this is required to get equal results.  Those that have it all are not the ones that are going to challenge the courts but those that have close to nothing and in a position like that without help from a government funding it tells them that this is their like and no one can do anything about it.

Section 15 under our Canadian Charter of Rights and Freedoms guarantees us equality rights, Section 23guarauntees minority language education rights, and section 7 of the constitutions outlines our legal rights. “Section 15(1) of the Charter prohibits discrimination on the basis of race, national or ethnic origin, colour, religion, sex age or mental disability.  Section 27 declares that the Charter shall be interpreted in a manner consistent with the preservation and enhancement of the multicultural heritage of Canadians.  Section 28 guarantees Charter rights equally to men and women.” (Smithey, 2001)  With all these rights being enforced by law everyone should have equal opportunity to challenge these laws if there rights are being infringed upon.  With the Courts Challenges Program those that are of the minority groups, who are most of the population in Canada today are unable to challenge the courts which undermines democracy in Canada.  Every person should be equal under the law, but if those from the minority groups are unable to receive fundamental rights then the Canadian Charter of Rights and Freedoms would be only benefit the majority of citizens while undermining the rights of minorities which was not its intent.  “Without the Courts Challenges Program Canada’s constitutional rights are real only for the wealthy-this is unfair, and it does not comply with the rule of law, which is also a fundamental principle of Canadian society and our Constitution. (Mackay, McGruder, & Jennings, 2009)

Canada was known for its collectivism, and equality, but as years go by Canada seems to be adopting an Americanized style.  With the Courts Challenges Program removed, Canada’s equality of result is replaced with equality of opportunity and instead of collectivism it takes a individualistic form.  “Michael Adams’s data reveal that over the past decade both Canadians and Americans have been shifting in their attitudes away from support for traditional authorities towards greater individualism”  (Nesbitt-Larking, 2009).  If this kind of style continues then what’s next?  Healthcare or welfare?

With the Courts Challenges Program reinstated it does not only allow those in minority groups but even the rest by bringing new cases to the foreground that can help many others in the same situation.  Furthermore, there are many different programs that are unnecessary that are being funded by the government, but something that requires the government funding to help those in need is being cut towards saving the budget.

In the debate article, “The Canadian Charter of Rights and Freedoms Is Antidemocratic and Un-Canadian” Robert Martin argues that Canada says it’s so multicultural and democratic but in truth it is on the contrary.  With the Courts Challenges Program is in favour of a more Canadian culture, which is in favour of helping those in need, but with this program cut to save money it takes a more Un-Canadian view.

Example of cases are Canadian Newspapers Co. v. Canada (attorney General), this was a sexual attack victim who was at the threat of having her name published in the paper.  With the funding of the Courts Challenges Program she was able to challenge the courts to get back her rights to chose if she wanted her name published or not.  Another case was Egan V. Canada and with the help of this program they were able to establish that discrimination based on sexual orientation constitutes a form of discrimination.  (Mackay, McGruder, & Jennings, 2009)

As Lenard mentions that, “ Ideally, political participation is about an attempt to find what is in the best collective interest of the community.  This involves identifying shared values, norms, participating in the creation and maintenance of a shared public culture..” (Lenard, 2006)  If our society is about getting everyone involved and their values then the cancellation of the Court Challenges program was not in the best interest of the collective society.  This is in favour of a more individualistic view and in a country like Canada this is not acceptable.

On the contradicting side of this argument Crosbie states that the only reason that the conservative government expanded the Courts Challenge Program was because if they were to eliminate this program they would have got “very bad publicity”. (Kheiriddin, 2009). Therefore, this just goes to show that this program was in favour by a majority of the population because Crosbie was able to secure the position he was fighting for by fabricating support for the program which ultimately won him votes. Kheiriddin suggests that after the emergence of section 15 of the charter, interest groups began to “demand direct government funding of minority rights litigations of all kinds, not just linguistic.”  Language rights were a major issue and that was resolved, but that is not the only kind of discrimination that is being violated in the Charter of Rights and Freedoms.  There are many infringements that minorities face that goes beyond language and require the financial funding to challenge courts.  If even one fundamental right is being infringed upon they should be able to challenge that in court with no limitations, any support needed should be available. If we continue to pride ourselves on being protectors of equality and freedom, then we can not discriminate on the type of equality and the type of freedoms we protect.

In conclusion Canada is portrayed as a democratic country where it is a more collectivistic society not an individualistic society like America.  Canada gives chances to those that need and opportunities to further grow their language and culture.  Canada does not put aside those that need help and lend a hand to those that are already in a good position.  By allowing the Courts Challenges Program to be reinstated it would help those that are unable to question the law that is being unfair to them.  Till 1920 women was not given the privilege to vote only after 1960 could women have the chance to vote, Japanese Canadians were imprisoned in Canada just because they were of Japanese decent, Children of Aboriginal background were pushed against their will to go to residential schools where their entire background including culture and language was taken away from them.   These people of minority disserve to practise their own language and be given the same rights everyone else does therefore with the Court Challenges Program re-instated it would further strengthen the states support for these minorities to live a non-discriminatory lifestyle.  This would lend a hand to those that think they cannot do anything to take a stance and allow them to challenge the courts.  Therefore, the Court Challenges program should be re-instated to further strengthen the Charter of rights and freedom and the society overall.

Anthoney, A. (2009). Socialism as Nationalism: Why the Alleged Americanization of Canadian Political Culture is a Fraud in Issues in Canadian Democracy. Toronto: Nelson.

Kenneth J., Danial M., Wayne M. (2009). Why the Government Was Wrong to Cancel the Court Challenges in Issues in Canadian Democracy. Toronto: Nelson.

Tasha, K. (2009). Why the Government Was Right to Cancel the Court Challenges Program in Issues in Canadian Democracy. Toronto: Nelson.

Robert, M. (2009). The Canadian Charter of Rights and Freedoms is Antidemocratic and Un-Canadian in Issues in Canadian Democracy. Toronto: Nelson.

Shannon, I. S. (2001). Religious Freedom and Equality concerns under the Canadian Charter of Rights and Freedoms. Canadian Journal of Political Science. 34(1), pg. 85-107

Rights: Your Rights to Equality. Retrieved on July 10, 2009, from http://www.ccppcj.ca/e/rights/rights.shtml