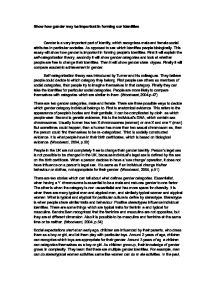 Show how gender may be important in forming our identities

Show how gender may be important in forming our identities Gender is a very important part of identity, which recognizes male and female social attributes in particular societies. As opposed to sex which identifies people biologically. This essay will show how gender is important in forming people's identities. First it will explain the self-categorization theory, secondly it will show gender categories and look at whether people are free to change their identities. Then it will show gender stereotypes. Finally it will compare academic achievement in gender. Self-categorization theory was introduced by Turner and his colleagues. They believe people could decide to which category they belong. First people see others as members of social categories, than people try to imagine themselves in that category. Finally they can take the identities for particular social categories. People are more likely to compare themselves with categories which are similar to them. ...read more.

It is same as if an individual change his/her behaviour or clothes, not appropriate for their gender. (Woodward, 2004, p.51) There are two stories which can tell about what defines gender categories. Essentialist, when having a Y chromosome is essential to be a male and reduces gender to one factor. The other is when the category is non-essentialist and has more space for diversity. It is when there are many typical men and atypical men, and similarly typical women and atypical women. What is typical and atypical for particular culture is define by stereotype. Stereotype is when people share similar traits and behaviour. Positive stereotypes influence individual identities. There are some things which are typical traits for feminine and typical for masculine. Sandra Bem recognized that the feminine and masculine are not opposites, but they are at different dimension. Also it is possible to be masculine and feminine at the same time or be neither. ...read more.

There is evidence, that the notion of achieving academically is linked with femininity. So it could happen that boys do not want to be seen as high achievers by their friends, as they feel 'uncool'. (Woodward, 2004, p.67) Murphy and Elwood suggest that boys and girls arrive at school with gendered behaviour and interests. Boys enjoy constructional activities and girls enjoy creative activities. They also suggest that when children are familiar with activities and topics at school, they have higher interests and confidence in doing them. (Woodward, 2004, p.70) Gender can shape people's identities in many ways. Self-categorization, how people see themselves can influence their behaviour. When a person decides to change their gender, it will have an influence on his/her identity. Each culture has different gender stereotypes. All these factors play a part in how different genders identify themselves. The way we are treated due to our gender has a significant role to play in the identities that we take on during our life. ...read more.