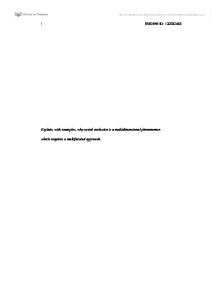 Explain, with examples, why social exclusion is a multidimensional phenomenon which requires a multifaceted approach. The following essay will examine, to what extent social exclusion is a multidimensional phenomenon which requires multifaceted responses, giving examples. "Social exclusion is a broader concept than poverty, encompassing not only low material means but the inability to participate effectively in economic, social, political and cultural life and in some characterizations alienation and distance from mainstream society (Duffy, 1995)" In the last decades, the concept of social exclusion has drastically increased in pupils' awareness. "Social divisions between racial and ethnic groups-along economic, cultural, and political lines-are a central feature of public life throughout the world. The problem spans geographic and political boundaries and reflects universal social dynamics (Loury, 2000)." The bases of social exclusion have been blamed to flaws in government policies, the constant changes in the eminent economy as well as national and international services offered to the population. Mostly it is the people who are socially excluded who are most vulnerable of asserting themselves or being maltreated by the society. ...read more.

Hence, such children have twice the probability of becoming victims of violence or having oppressed parents - both which are risk factors for social exclusion. One way, in which social exclusion, due to poverty, has been dealt with, was the rise of wages for ethnic minorities. This happened in Vienna, Austria in the year 2002. The people concerned were mainly of Bosnian, Turkish or Serbian decent and employed in low-paid jobs in the secondary and tertiary sector. Such governmental actions have given immigrants in Vienna the chance to improve their lifestyle and therefore "rise" in the social-class level. The wage rise meant that families could now afford better education for their children, increasing the chance of them becoming socially included. Secondly, transport can also represent a significant barrier to social inclusion. An estimated two-thirds of the poorest 20% of the population - worldwide - do not have the possibility of utilizing cars. Therefore, most of the affected people opt for public transport, but these are not accessible and in addition, the prices often outrage the financial possibilities of the people, meaning that they cannot operate them, even if they have them in the vicinity. ...read more.

The UK study found that social exclusion and deprivation consistently emerge as underlying factors in the over-representation of certain visible minority groups in the criminal justice system (Meares, 1996). In Western countries, members of disadvantaged minority groups are more likely to be arrested, convicted, and imprisoned for violent crimes, property crimes, and drug-related crimes. In my opinion, "the solution to social exclusion lies not in myriad attempts to repair society at points of breakdown, but in persuading relatively affluent groups that social inclusion is worth paying for (Watt, 1999)." However, it is easier said than done. Since there are too many factors which affect social exclusion and everyone can be affected by it without precaution, it is difficult to limit its happening. Yet, the Government has made tackling these interfolded problems a priority because of the huge costs to individuals and society, as well as the impact it has on public spending and the competitiveness of the economy. In the future, I therefore do expect a reasonable amount of people, who currently are not, becoming socially included. However, there will be no end to social exclusion, since as explored in this essay, it is an ongoing process which can be caused by too many factors and is therefore very difficult to completely abolish. ...read more.