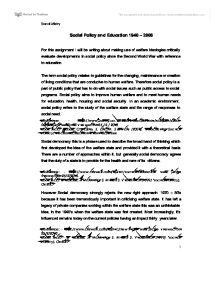 Social policy. Making use of welfare ideologies critically evaluate developments in social policy since the Second World War with reference to education.

Social Policy and Education 1940 - 2008 For this assignment I will be writing about making use of welfare ideologies critically evaluate developments in social policy since the Second World War with reference to education. The term social policy relates to guidelines for the changing, maintenance or creation of living conditions that are conducive to human welfare. Therefore social policy is a part of public policy that has to do with social issues such as public access to social programs. Social policy aims to improve human welfare and to meet human needs for education, health, housing and social security. In an academic environment, social policy refers to the study of the welfare state and the range of responses to social need. Reference: - http://www.polity.co.uk/shortintroductions/samples/dean-sample.pdf web site viewed on 25 / 2 / 2010 Book read: Alcock, C. Payne, S. and M. Sullivan, (2004), 'Introducing Social Policy,' Pearson Education Limited, Essex Social democracy this is a phrase used to describe the broad band of thinking which first developed the idea of the welfare state and provided it with a theoretical basis. There are a number of approaches within it, but generally social democracy agrees that the duty of a state is to provide for the health and care of its citizens. Reference: - http://www.answers.com/topic/social-democrats web page viewed on 25/2/2010. Book read: J. Baldck, N. Manning, S. Miller, S. Vickerstaff (1999) 'social Policy), Oxford However Social democracy strongly rejects the new right approach 1970 - 80's because it has been tremendously important in criticising welfare state. It has left a legacy of private companies working within the welfare state this was an unthinkable idea, in the 1940's when the welfare state was first created. ...read more.

and secondary (11-15 years old) that many local authorities had already introduced. While defining the school leaving age as 15, it granted the government the power to raise the age to 16 "as soon as the Minister is satisfied that it has become practicable", though the change was not implemented until 1973. The Act also provided for community colleges, offering education for both children and adults, a measure that was only followed through by a few local education authorities such as the Cambridgeshire Village Colleges, and Coventry, Derbyshire and Nottinghamshire community schools. Reference book read: - J. Baldck, N. Manning, S. Miller, S. Vickerstaff (1999) 'social Policy), Oxford K. Blakemore and E. Griggs (2007) Social Policy Introduction Third Addition, Open University Press For the first time Butlers act would provide free education for all children and with mixture of the eleven plus this would give opportunities to bright working class people. Soon after the Butlers act was criticised for failing to see a number of issues like multi faith identity and Butler cannot make out between who failed and went to secondary school and who passed and went to grammar school. The Labour party rapidly took the view and moved towards schooling for children of all abilities of level, which has already taken on board by some of the local authorities. Reference: http://www.vam.ac.uk/moc/childrens_lives/education_creativity/education_england/index.html webpage viewed on 27/4/2010 Book read P. Alock (2003) social policy in Britain second addition, palgrave mcmillan Tony Crosland In 1965 the secretary of state education requested all authorities to move towards this secondary schooling. However it was not until the 1976 act that the government used legislation to reorganised education on a complete basis. Reference: http://www.vam.ac.uk/moc/childrens_lives/education_creativity/education_england/index.html webpage viewed on 27/4/2010 Book read P. ...read more.