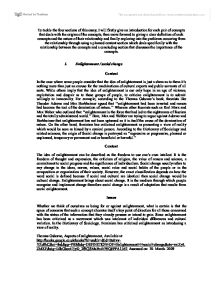 In the case where some people consider that the idea of enlightenment is just a sham as to them it’s nothing more than just an excuse for the machinations of cultural experts and public servants of all sorts. While others imply that the idea of enlightenment is our only hope in an age of violence, exploitation and despair as to these groups of people, to criticize enlightenment is to submit willingly to immorality. For example; according to the Thomas Osborne’s book, theorists like Theodor Adorno and Max Horkheimer agued that ‘‘enlightenment had been inverted and reason had become the tool of the domination of nature.’’ Whereas other theorists such as Karl Marx and Max Weber who outlined that ‘‘enlightenment is the force that had led to the nightmares of fascism and the totally administered world.’’ Here, Max and Webber are trying to argue against Adorno and Horkheimer that enlightenment has not been upturned as it is itself the cause of the domination of nature. On the other hand, feminism has criticized enlightenment as presenting a view of reality which would be seen as biased by a cynical person. According to the Dictionary of Sociology and related sciences, the origin of Social change is portrayed as ‘’regressive or progressive, planned or unplanned, temporary or permanent and or beneficial or harmful.’’

The idea of enlightenment can be described as the freedom to use one’s own intellect. It is the freedom of thought and expression, the criticism of religion, the value of reason and science, a commitment to social progress and the significance of individualism. Social change usually refers to any change in the ideas, norms, values, social roles and social habits of the people or in the composition or organization of their society. However, the exact classification depends on how the word social is defined because if social and cultural are identical then social change would be cultural change. Enlightenment brings about social change. It is the medium through which people recognise and implement change therefore social change is a result of adaptation that results from social enlightenment.

Whether we think of ourselves as being for or against enlightenment, what is certain is that the space of concerns that such a concept allocates itself a key point of direction for all those concerned with the status of the information that they already possess or intend to gain. Since enlightenment has been criticized as a movement which was intolerant of individual differences and cultural variation. In the Dictionary of Sociology, Feminism has criticized enlightenment as introducing a view of reality.

Progress is not necessarily a monotonically increasing advance. The idea of external Progress is in opposition to the cyclic theory of eternal return or eternal reoccurrence, which implies that with a finite amount of space and energy in the universe, all events will recur indefinitely. According to Marx, the stages of history consist of the six different factors explained below;

Slave Society- From Marxist perspective, this stage ended when it exhausted itself, when the need to keep conquering more slaves created huge problems. It is the nobility born in this era that destroyed this stage and pushed society to the next step.

Feudalism- this stage, there were many classes such as kings, lords, and serfs, some little more than slaves. At this time societies must create all these new classes, trade with other nation-states increases rapidly. This brought about the creation of the merchant class.

Capitalism- appears after the bourgeois revolution when the capitalists overthrow the feudal system. In the capitalist controlled parliament laws are made to protect wealth and the wealthy. But Marx’s, capitalism like slave society and feudalism, has critical failings inner disagreements which will lead to its downfall. Marx believed that capitalism always leads to monopolies and leads people to poverty.

Socialism- socialism raises everyone's quality of life above the unstable existence they knew up till now, providing decent health & child care, housing, etc for all without exception, Marxists believe that this era will succeed in raising the quality of life for all by ending the destructive disagreements which arise in capitalism through conflicts between competing capitalists and competing capitalist nations, and ending the need for imperialist conquest for the control of goods and markets.

Communism- In communist manifesto, Marx described communism as ‘‘when, in the course of development, class distinctions have disappeared, and all production has been concentrated in the hands of a vast association of the whole nation, the public power will lose its political character. Political power, properly so called, is merely the organized power of one class for oppressing another.’’

Progress is the idea of an advanced that occurs within the limits of mankind’s collective morality and knowledge of its respective environment. Stages of history can be described as a subset of progress. The idea of progress is often associated with the western notion of a straight linear direction as developed by Aristotle, or the complex notion as developed by Plato. The idea spread during the Renaissance in early modern Europe, marking the end of the static view of history and society which characterized feudalism. Belief in progress was a dominant paradigm in the 18th and 19th centuries, and the Industrial Revolution.

Marx saw that each of the above stages created a new class or development that would lead to its breakdown. However the breakdown would not be an automatically negative doing, since with every step humanity as a whole would benefit. Therefore every passing stage would raise the standard of living of the masses while at the same time be destined to its own defeat because of internal oppositions and class conflicts.

Weber’s general theory of rationalisation (of which bureaucratic development is a particular case) refers to increasing human mastery over the natural and social environment. In turn, these changes in social structure have changed human character through changing values, philosophies and beliefs. Rationalisation was the master concept of Marx’s analysis of modern capitalism, referring to a variety of related processes by which every aspect of human action became subject to calculation, control and measurement. In economic organization, rationalization involved the organization of the factory by bureaucratic means and calculation of profit by systematic accounting procedures. Here Weber argued that rationalisation have profoundly negative effects on socialisation, social integration and cultural production.

According to Marx’s concept of alienation, rationalisation involves the separation of the individual from family, church and community, and his political and economic regulation in the factory, school and state. Rationalisation process is the practical application of knowledge to achieve a desired end. It leads to efficiency, coordination, and control over both the physical and the social environment. It is the guiding principle behind bureaucracy and increasing division of labour.

Rationalisation has led to the extraordinary increase in both the production of goods and services. It is also associated with secularisation, depersonalisation and cruel practice. Increasingly, human behaviour is guided by observation, experiment and reason to master the natural and social environment to achieve a desired end.

Whereas bureaucracy is an organization in which power is distributed in an unbending hierarchy with visible lines of authority. In relating to Marx, it was the best administrative form for the rational or efficient pursuit of organizational goals comprising a high degree of specialization and a clearly defined division of labour.

These two concepts fit well together since they were both developed by Max Weber under the introduction of the formal organization scheme known as social system. Where he suggested that the success of organizational goals takes priority over the welfare of individuals and impersonal rationality is valued as a basis for making decisions in light of those goals.

Such supernatural norms and values as individualism, efficiency, self-discipline, materialism, and calculability have been encouraged by the bureaucratic process. Bureaucracy and rationalisation were rapidly replacing all other forms of organisation and thought. The growth of bureaucracy has resulted in extreme concentrations of power at every large levels of social organization, especially in modern states and transnational corporations. As power concentrates in bureaucracies, it turned out to be key sites for social control, conflict and oppression.

Organic solidarity is one of the two sources of cohesion identified by Durkheim. It takes affect with the continuous increase in the division of labour. It is branded by a support, which is automatically produced through the pursuit by each individual of his own interests. Whereas meritocracy has served as a guide of change in Britain’s educational system. It has also served as an ideology through the argument that social difference results from uneven value rather than oppression and discrimination. Solutions to this concept include a legitimate way to measure merit and offer equal opportunity based upon it, a system that also forms the greatest barriers to achieving it.

Organic solidarity (dependant on everyone else for a smooth continuing society) is a multifaceted division of Labour where people rely on one another since specialization has created difficulties for them to survive as independent individual. Meritocracy is a social system in which people’s success in life depends primarily on their talents, abilities and effort. The differences between these two concept is put together since those from lower class tend to join their talent together to work as a group in order to survive in other word, people who are less able or poor, but poses good skill/ knowledge join together to assist one another.

Centuries of social inequality and oppression have left racial minorities and the lower classes in an essentially disadvantaged position in which they will inescapably appear to lack merit. With our society becoming more advanced as well as populated, the movement of solidarity is directly affected by the mass of the population. Coming with this increased population is increased competition.

The Emile Durkheim Archive, Available at: http://durkheim.itgo.com/solidarity.html Assessed on: 19- March- 2009

Marx believed all historical societies contain basic disagreements, the misuse of one social group by another. In a way, Marxism (Marx) is maybe a little more realistic than functionalism (Emile Durkheim who believes that society must be divided into separate groups). As a whole all the above concepts links to each other because they are the key to our contemporary labour and organizational practice.