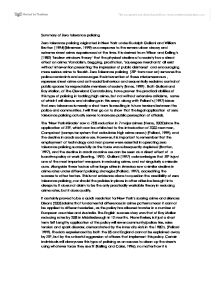 Summary of zero tolerance policing. ZTP acts to neutralise crime (Wilson and Boland, 1978) by targeting anti-social behaviour. Both America and England provide evidence of its success as it results in complete changes in lifestyles in populations

Summary of Zero tolerance policing Zero tolerance policing originated in New York under Rudolph Guiliani and William Bratton (1994)(Silverman, 1999) as a response to the severe urban decay and extreme street crime experienced at the time. It is derived from Wilson and Kelling's (1982) 'broken windows theory' that the physical decline of a society has a direct effect on crime: Vandalism, begging, prostitution, 'squeegee merchants' all exist without intervention presenting the impression of public disinterest and encouraging more serious crime to flourish. Zero Tolerance policing (ZTP from now on) removes the police constraints and encourages the intervention of these misdemeanours, represses street crime and anti-social behaviour and sequentially reclaims control of public spaces for respectable members of society (Innes, 1999). Both Guiliani and Ray Mallon, of The Cleveland Constabulary, have proven the practical abilities of this type of policing in tackling high crime, but not without extensive criticisms, some of which I will discuss and challenge in this essay along with Pollard's (1997) ...read more.

Alongside these factors other large cities in America saw a similar decline in crime rates under different policing strategies (Pollard, 1997), accrediting the success to other factors. This is not evidence alone to question the credibility of zero tolerance policing, nor should the policies in place in other cities be brought into disrepute. It does not claim to be the only practically workable theory in reducing crime rates, but it does qualify. It certainly proved to be a quick resolution for New York's soaring crime and silences Dixons (2005)claims that fundamental differences in crime patterns mean it cannot be applied to different societies, as the policy has allowed transfer in a number of European countries and Australia. The English success story was that of Ray Mallon reducing rates by 25% in Middlesbrough in 12 months. Nonetheless, is it just a short term fix? Lengthy application of the policy will sever community/police ties, raise tension and spark disorder, demonstrated by the inner city riots in the 1980's. ...read more.

The public are most concerned about falling victim to burglary, car theft or personal attack, even though the likelihood of it is quite low. Residents of Bankhill, an area that has recently fallen victim to physical demise regard "petty crime" (Walklate, 2007; 60) as the largest problem and are calling out for officials to act. Individuals that live in socially dilapidated areas are faced with low level crimes daily and forced inside for their own safety, but when these misdemeanours are addressed, intolerance to crime is identified resulting in a reduction in fear of more serious offences (Edwards, 2005). ZTP acts to neutralise crime (Wilson and Boland, 1978) by targeting anti-social behaviour. Both America and England provide evidence of its success as it results in complete changes in lifestyles in populations that were once delinquent and it does not end there(Bowling, 1997). The aggressive nature of the police will always cause dispute in a policy as radical as ZTP; this does not point to a flaw in the policy but a flaw in the individuals employed to implement it. ...read more.