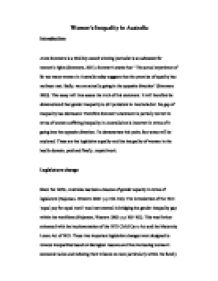 Summers states that The actual experience of far too many women in Australia today suggests that the promise of equality has not been met. Sadly, we are actually going in the opposite direction (Summers 2003). This essay will thus assess the trut

Women's Inequality in Australia Introduction Anne Summers is a Walkley award winning journalist is an advocate for women's rights (Summers, 2011). Summer's states that "The actual experience of far too many women in Australia today suggests that the promise of equality has not been met. Sadly, we are actually going in the opposite direction" (Summers 2003). This essay will thus assess the truth of this statement. It will therefore be demonstrated that gender inequality is still persistent in Australia but the gap of inequality has decreased. Therefore Summer's statement is partially correct in terms of women suffering inequality in Australia but is incorrect in terms of it going into the opposite direction. To demonstrate this point, four areas will be explored. These are the legislative equality and the inequality of women in the health domain, paid and finally, unpaid work. Legislature change Since the 1970s, Australia has been a beacon of gender equality in terms of legislature (Najaman, Western 2003: p.p 100-102). The introduction of the 1972 'equal pay for equal work' was instrumental in bridging the gender inequality gap within the workforce (Najaman, Western 2003: p.p 100-102). This was further enhanced with the implementation of the 1972 Child Care Act and the Maternity Leave Act of 1973. These two important legislative changes were designed to remove inequalities based on biological reasons and thus increasing woman's economic value and reducing their reliance on men particularly within the family nucleus (Summers 2003: p.p 121-141). ...read more.

They concluded that in 1999 woman accounted for only 4% of company directors and 12% of senior management positions in firms with more than 100 employees (Najaman, Western 2003: p.p 89-112). In addition woman make up seven out of the five hundred highest paid executives in Australia's top one hundred and fifty firms (Najaman, Western 2003: p.p 89-112). While woman have entered industries, which were traditionally dominated by men (such as mining), they often pay a high cost for non-conformity through bullying tactics that include isolation and harassment (Najaman, Western 2003: p.p 89-112). In addition the sexual division of labor has often precluded gender inequality through the valuation of those occupations considered to male and female. For example nursing, which is considered to be female job, earn approximately $38,000-$90,000 (rounded up) a year (Nursing Labour Force, 2011) while the male dominated industry of construction workers can expect an average yearly wage of $83,000 (Private Sector Construction Industry, 2004). Part time employment also demonstrates a stark gender imbalance within paid employment. A greater portion of woman are engaged in part time permanent work and casual work. This can be attributed to the patriarchy developed social pressures, which essentially force woman to juggle both paid and unpaid work. The issue surrounding this imbalance is that the part time labor market is traditionally typified with lower rates of pay, reduced chances of promotion and generally instable in relation to full time employment (Najaman, Western 2003: p.p 89-112). ...read more.

The social roles performed within a marriage can have an impact on both partners. It is argued by sociologist such Jessie Bernard that marriage is beneficial for the mental health of men while it has a negative impact on the mental health of woman (Greig, Lewins, White 2003: p.p 58-77). This has contributed to depression and dementia being amongst the major causes for death amongst woman. It should be noted that there have been historical improvements in the amount of unpaid work men do compared to women and thus the inequality in he sexes is improving (Greig, Lewins, White 2003: p.p 58-77). However, statistically, women are still doing far more work than males and thus there is still inequality for women due to the perceived traditional role for women. Conclusion The statement by Anne Summers presents a certain degree of truth in terms of the continuation of inequality in modern Australia. This is examined in three primary areas: the health domain, paid and unpaid work. In all three of these arenas there is inequality in terms of the value of women's work and the amount they do compared to their male counterparts. However the legislative change, particularly in the last forty years, has decreased the gender inequality. As a result, the gap of inequality between men and women is slowly decreasing. Therefore it can be concluded that gender inequality is present within Australia. However, Anne Summers prognoses that the situation is getting worse is false, rather the gender inequality gap has decreased. ...read more.