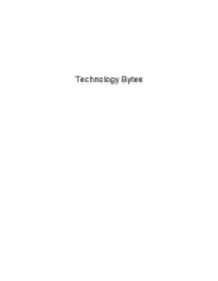 Surveillance of Society. This is the first step towards a submissive and controlled civilization. Surveillance reinforces divisions within society

﻿Technology Bytes Sociology 101 Anita VanWick According to Lyon (1996), ?We live in a surveillance society? (p. 203). The creation, collection and processing of personal information is an ever-present reality. Every time we use our loyalty cards at a retailer, our names are connected with our purchases and entered into extensive data bases. Every time we use a cell phone, navigation system, credit card, our location is recorded, examined, and stored. Similarly, Surveillance cameras are now present on street corners, in schools, parks, and even in public restrooms. It can easily be said that privacy is becoming non-existent in a society where surveillance technology runs rampant, becoming a normality. Business owners once began using a collection of mirrors reflecting off one another to get a broader range of vision throughout their stores. Years later, this became outdated with the development of closed circuit television monitoring. After the creation of video cassette recorders, surveillance could now be preserved on tape as evidence. ...read more.

One of the biggest objectives about surveillance cameras concerns invasiveness. Many people feel that they should be free to travel or move around the city without being photographed or recorded. What started as a simple way to monitor security around the perimeter of public places has evolved to a point where one can install a hidden video camera and monitor that video from anywhere in the world, directly over the internet. The integration of traffic cameras and face recognition software give law enforcement the ability to track and identify anyone without us even knowing about it. Presently, the need for human involvement in surveillance tasks is declining. With new cameras possessing features like motion detection, automatic alert features, and behavior recognition, the job of video surveillance can almost take care of itself. As surveillance systems become more efficient and effective, they have become more prominent. At Super Bowl XXXV, law enforcement used the aid of Biometrics. ...read more.

Many people do not trust the government and believe information could be used in the wrong way or be twisted to victimize people. The Personal Information Protection and Electronic Documents Act is one type of right to privacy law in Canada. This act states that unless in extreme circumstances, such surveillance is only legal when those who are being taped are aware that it?s happening. The law forces organizations to obtain consent when collecting or disclosing personal information. These overbearing ways of security are just the tip of the iceberg. Iris scans, fingerprint verification and national identity cards are all being considered. As much as this may seem appropriate to protect our society they also open a door for potential abuse. It is unfortunate, but there is no middle ground. If we move ahead with the implementation of newer, smarter, more advanced technology, privacy will suffer as a result. Lyon, D. (1996) The Electronic Eye. U of Minnesota: Island Press. Durkin, J. (2011) Biometrics Used to Detect Criminal at The Super Bowl. Tampa Bay, Florida: ABC News. Sociology: Your World for a New Compass World, Third Canadian Edition. (2010, 2007) United States: Wadsworth/Cengage Learning. ...read more.