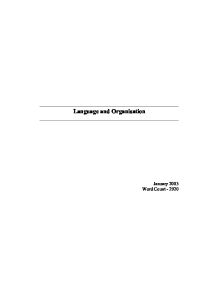 Language and Organisation January 2003 Word Count - 2920 Talk in Context: Applying Theoretical Understanding Introduction In an increasingly diverse and multi-cultural world with greater accessibility to foreign countries, the issue of language and culture and understanding the differences inherent amongst ourselves is becoming much more important especially in a business context. More and more Western businesses are seeking to take advantage of the relatively untapped Eastern markets as a more global perspective is beginning to emerge (Levitt, 1983). However, failure to understand the culture of the new market is a key hurdle that has to be overcome to stand any chance of success (McGoldrick, 1995). Therefore, the following paper attempts to highlight the key differences in culture between these two opposing sides, analysing semiologically why differences in meaning making exist, and through discourse analysis examines how language and culture influences, and is manifested, in the way people act. The impacts of these differences in meaning making will be evaluated to highlight the importance of language and culture when attempting to build relationships with culturally different companies. The meaning of Culture The concept of culture developed from anthropology and is difficult to define or explain precisely (Mullins, 1999). Atkinson (1990) explains organisational culture as reflecting the underlying assumptions about the way work is performed; "what is acceptable and not acceptable". Culture is thus a "signifying system" through which social order is communicated, explored and reproduced (Cohen, 2002). Therefore, based on this definition it is quite plain to see that different countries, even companies of the same nationality, will have different working practices and these must be understood if relationships are to be developed. For example, many failed mergers between companies have been blamed on a "clash of cultures" which can be essentially understood as the organisations' underlying beliefs and values not being as compatible as was originally perceived, thus conflict arises over what is the best working practice. ...read more.

Trying to explain the Religious discourses of the Bible is near impossible because her Grandfather's meaning making process, i.e. the relationship between signifier, signified and wider social context, is completely different and thus the message is ambiguous and misunderstood, and as demonstrated, completely rejected. Mah also goes on to suggest that the only way for a person to free their thoughts from the prison which language creates is to learn a new language. Therefore, "this new knowledge enables us to view our first language objectively from without, creating fresh insight while further enhancing the interplay between language and thought." When considered in terms of binary opposites, if one language is a prison, then knowing two languages naturally "frees" a person. From an organisational perspective, this demonstrates that developing relationships may still be hindered because certain concepts and meaning exist that are culture specific. There will never be directly translatable ideas because each language and culture makes meanings in a different way. Unless you consider what the people living the culture see as significant (Geertz, 1973), misunderstanding and confusion will always result. Even if English were used as a common language, communication would still be difficult because people still make meaning through their own cultural frames (Gudykunst, 1998). Therefore we use cultural assumptions we are familiar with to make sense of signs that may well be based on different assumptions (Cohen, 2002). Even when Chinese people attempt to speak English, they use their own cultural frame of how the Cantonese/Mandarin word order goes and then attempt to translate it. For example, when speaking English, Chinese people often say "he" for "she" or "it", and vice versa, as they are all pronounced the same in Chinese but their meaning are deduced in relation to other words. ...read more.

For example, Mah (2001) recounts one occasion when a close friend thought she was "giving face" to the British mother of her future son in law by complimenting on her beautiful gems and asking, "How much they cost?" In Mrs. Wang's eyes, she was giving her close relative a big dose of mian zi (face). But to Lady Sutherland, her bold question was merely a vulgar invasion of her privacy. The significance of this is it highlights how the culture discourse influences people's actions and how they can be misinterpreted. But an understanding of why people may act differently to what you may be used to will help explain certain behaviours and also highlight what is required in terms of establishing and maintaining strong business relationships. For example, the business practice of exchanging business cards carries more significant symbolic value in Japan than in other countries; it is a sign of respect and social etiquette (Cohen, 2002). By not following this process, conflict will arise within the relationship, as not following traditional formal greetings will immediately cause bad impressions. Conclusion As businesses become more international and far reaching, this paper has highlighted the importance of understanding cultural differences when attempting to create relationships, specifically between eastern and western companies. As demonstrated, communication between different cultures is often very difficult because of the differences in meaning making defined by language, and also due to the underlying beliefs and values that influence what is the cultural norm. Therefore to rectify this situation, and thus develop and maintain relationships, organisations must acknowledge the importance of culture and at least make some effort to appreciate that differences are present, and try to gain a degree of "cultural literacy" (Schirato and Yell, 2000), to be able to understand better the intricacies involved in retaining a strong cross-cultural relationship. ...read more.