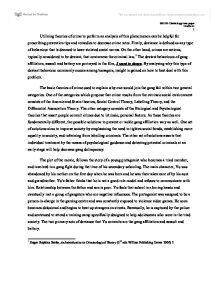 Utilizing theories of crime to perform an analysis of this phenomenon can be helpful for prescribing prevention tips and remedies to decrease crime rates. Firstly, deviance is defined as any type of behaviour that is deemed to have violated social norms. On the other hand, crimes are actions, typically considered to be deviant, that contravene the criminal law.1 The deviant behaviours of gang affiliation, assault and battery are portrayed in the film, I want to dance. By analysing why this type of deviant behaviour commonly occurs among teenagers, insight is gained on how to best deal with this problem. The basic theories of crime used to explain why one would join the gang fall within two general categories. One of the categories which propose that crime results from the extrinsic social environment consists of the Anomie and Strain theories, Social Control Theory, Labelling Theory, and the Differential Association Theory. The other category consists of the Biological and Psychological theories that assert people commit crimes due to intrinsic, personal factors. As these theories are fundamentally different, the possible solutions to prevent or tackle gang affiliation vary as well. One set of solutions aims to improve society by emphasising the need to tighten social bonds, establishing more equality in society, and refraining from labelling criminals. The other set of solutions asserts that individual treatment by the means of psychological guidance and detecting potential criminals at an early stage will help decrease gang delinquency. The plot of the movie, follows the story of a young protagonist who becomes a triad member, and involved in a gang fight during the time of his secondary schooling. The main character, Yu was abandoned by his mother on the first day when he was born and he was then taken care of by his aunt and grandmother. Yu's father thinks that he is not a good role model and refuses to communicate with him. ...read more.

Consequently, his distain towards this institution led to his delinquent behaviour. The Labelling Theory contains three primary schools of thought. Frank Tennbaum avers that identifying children as delinquents alters their self-esteem and causes people to react to the tag instead of the individual. The tag is appended to a child when they are caught doing something deemed delinquent. In the case of Yu from the film, this branch of thought is not known to apply to him because there is no mention of whether or not he had been previously apprehended for delinquent behaviour. H. Becker (1963) provides additional insight on how defiance may have first been defined. He holds a relativistic view of deviance and asserts that it is a notion established by moral entrepreneurs, people who dictate what is right or wrong in society. Deviance is what is deemed to be inappropriate, which is reflected in the legal system which upholds laws sanctioning certain deviant behaviour. Thus, crime is only a product of social interaction. The deviant crimes that Yu has committed are only actions which society deems to be inappropriate. As E. Lemert writes in his work, Social Pathology (1951), a person labelled who does not have a strong self-image may be susceptible to readily internalising the label. The process of labelling may also lower self-esteem. The dissatisfaction towards his mother and low self esteem may cause him to seek alternative ways to find the sense of accomplishment. Hence, unable to resist him from delinquency. For example, the amount of violence able to assert on someone, are able to demonstrate his masculinity. Joining the triad would also bring him a sense of security which neither his parents nor relatives can provide. He does not ponder about the implications of his actions and yields under peer pressure when asked to attack another gang group. The biological theory of crime titled Atavism by C. ...read more.