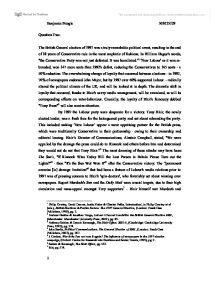 Question Two. The British General election of 1997 was a truly remarkable political event, resulting in the end of 18 years of Conservative rule in the most emphatic of fashions. In William Hague's words, "the Conservative Party was not just defeated. It was humiliated."1 'New Labour' as it was re-branded, won 147 more seats than 1992's defeat, reducing the Conservatives to 165 seats - a 50% reduction. The overwhelming change of loyalty that occurred between elections - in 1992, 70% of newspapers endorsed John Major, but by 1997 over 60% supported Labour - radically altered the political climate of the UK, and will be looked at in depth. The dramatic shift in loyalty that occurred, thanks to Blair's savvy media management, will be examined, as will its corresponding effects on voter-behaviour. Crucially, the loyalty of Blair's famously dubbed "Tony Press"2 will also receive attention. By 1997 the Labour party were desperate for a victory. Tony Blair, the newly elected leader, was a fresh face for the beleaguered party, and set about rebranding the party. This included making 'New Labour' appear a more appetising partner for the British press, which were traditionally Conservative in their partisanship - owing to their ownership and editorial leaning. Blair's Director of Communications, Alastair Campbell, stated, "We were appalled by the damage the press could do to Kinnock and others before him and determined they would not do not that Tony Blair."3 The most damning of these attacks may have been The Sun's, "If Kinnock Wins Today Will the Last Person in Britain Please Turn out the Lights?"4 - then "It's the Sun Wot Won It"5 after the Conservative victory. The "permanent exercise [in] damage limitation"6 that had been a feature of Labour's media relations prior to 1997 was of pressing concern to Blair's 'spin-doctors', who feverishly set about winning over newspapers. Rupert Murdoch's Sun and the Daily Mail were crucial targets, due to their high circulation and mass-appeal amongst Tory supporters7 - Blair himself met Murdoch and discussed ...read more.

Issues such as European integration and political 'sleaze' were given extensive coverage at the expense of 'the economy', 'crime' and 'employment'; issues which would have favoured the Tories had print-media attention not been elsewhere. The focus on Europe49 and 'sleaze' proved decisive in exposing a divided and directionless Conservative party in 1997, encouraging a wave of support for Blair's New Labour amongst would-be Conservative supporters, showing an area in which the print-media hold great influence. "Overall, during the 1997 campaign more than twice as many people were reading a newspaper that backed Labour as were reading one that supported the Conservatives."50 However, this Labour support was to a large extent weak and issue-specific, and fits Deacon et al's term "hollow-centred partisanship."51 While tabloids like The Sun, News of the World, Daily Star offered luke-warm support to Labour, they were just as capable of criticism, such as The Sun's warning, "...when we think [Labour] are wrong, we will shout so loud we will deafen them."52 Deacon et al argue that the support of these papers was "permeated by reservations"53; none more so than on the issue of European alignment - over which The Sun, News of the World and Mail on Sunday "...could not quite suppress [their] doubts..."54, with News' "sinister silence" and The Suns' "Is THIS the most dangerous man in Britain?" 55 editorials. A "least-worst rather than best-case"56 mindset existed amongst Fleet Street's shrewd 'media barons', and, in 1997 New Labour was the former - "...their loathing for an increasingly divided and directionless Tory party"57 pushed many papers in a more liberal direction. Daniel Finkelstein critiqued this change; "...in the end [tabloids are] selling copies to people who have strong views of their own - they have to make sure they're in synch with it."58 Norris builds on Finkelstein, stating that the press, "follow the lead of their readers in the polls..."59 This helps to explain why such a large 'corridor of uncertainty' existed in 1997 - seven 'fence-sitters' with a combined readership of about 13.5 million people60 Britain's partisan press were exercising pragmatism. ...read more.