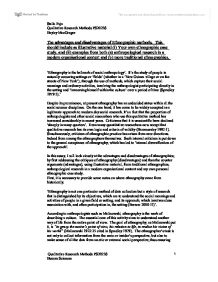 The advantages and disadvantages of Ethnographic methods.

The advantages and disadvantages of Ethnographic methods. This should include as illustrative material (i) Your own ethnographic case study, and (ii) examples from both (a) anthropological research in a modern organisational context and (b) more traditional ethnographies. 'Ethnography is the hallmark of social anthropology'. It's the study of people in naturally occurring settings or 'fields' (whether in a 'New Guinea village or on the streets of New York'), through the use of methods, which capture their social meanings and ordinary activities, involving the anthropologist participating directly in the setting and 'immersing himself within the culture' over a period of time (Spradley 1979:3).' Despite its prominence, at present ethnography has an undecided status within all the social science disciplines. On the one hand, it has come to be widely accepted as a legitimate approach to modern day social research. It's a fact that the proportion of anthropologists and other social researchers who use this qualitative method has increased considerably in recent years. Criticisms that it is unscientific have declined 'sharply in many quarters'. Even many quantitative researchers now accept that qualitative research has its own logic and criteria of validity (Hammersley 1992:1). Simultaneously, criticism of ethnographic practice has arisen from new directions. Indeed from among the ethnographers themselves. Such internal criticism is put down to the general acceptance of ethnography, which has led to 'internal diversification of the approach'. In this essay, I will look closely at the advantages and disadvantages of ethnographies; by first addressing the critiques of ethnography (disadvantages) and then the counter arguments (advantages), using illustrative material, from traditional ethnographies, anthropological research in a modern organisational context and my own personal ethnographic case study. First, it is necessary to provide some notes on where ethnography came from historically. 'Ethnography is not one particular method of data collection but a style of research that is distinguished by its objectives, which are to understand the social meanings and activities of people in a given field or setting, and its approach, which involves close association with, and often participation in, the setting (Brewer 2000:11)'. ...read more.

Hence the procedural rules within natural science models of social research being designed to eliminate the effects of both the researcher and the tool used to collect the data. Besides this, ethnography infringes the principles concerning the nature of data. The natural science model of social research seeks to describe and measure 'social phenomena', however both description and measurement are achieved by assigning numbers to the phenomena. It deals with quantity and numerate data. Contrastingly ethnography also describes and measures, but does so by means of extracts from natural language (i.e. quotations from interviews, snippets from personal documents, extracts from field notes) and deals with quality and meaning, rather than quantity and numerate data. Meanings are likely to seem unreliable, shifty and weak. Such data can 'appear too subjective and contrast unfavourably with numerate data, which appears to be more objective' (Brewer 2000: 21). Evans-Pritchard's (1940) ethnography on the Azande, demonstrates this, "Because I had to live in such close contact with the Nuer, I knew them more intimately that the Azande, about whom I am able to write a much more detailed account. Azande would not allow me to live as one of themselves; Nuer would not allow me to live otherwise. Among the Azande I was compelled to live outside the community; among the Nuer I was compelled to be a member of it...there is much that I did not see or inquire into" Similarly, this is something I too encountered when conducting my own ethnographic case study. Upon entering the religious sect, it was important to remember that I was not entering into the group's weekly services merely to just observe the rituals and chart the interactions - but also to be a participant in those activities as well, at least in so far as I were able to do so, given limitations on the time. This therefore couldn't be a one-sitting project; it required several visits to the church, both to familiarise with the rituals and personnel, and to make myself known to members of the congregation. ...read more.

He went on to argue it as being ' a call to openness in people's attitudes towards ethnographic data', and insisted that it had three dimensions: the belief that extracts from field notes, bits of recorded talks and reports of observed actions can reliably represent a social world, just as long as the ethnographer is 'reflexive', thereby establishing his/her 'integrity' and the authority of the data; the belief that events in everyday life have common features with the broader social world and can illustrate broader social processes, just as long the ethnographer sets out the grounds on which empirical generalisations are made; and the belief that people make sense of their everyday lives, and offer descriptions and accounts which must be analysed if that social world is to be understood, although members accounts should not be taken at 'face value'. Retrospectively ethnography still has an undecided status within all the social science disciplines. It has become widely accepted as a legitimate approach to modern day social research (the proportion of anthropologists and other social researchers who use this qualitative method has increased considerably in recent years). Criticisms that it is unscientific have declined 'sharply in many quarters'. Even many quantitative researchers now accept that qualitative research has its own logic and criteria of validity. It had even been accorded a role as a sensitising tool for collecting the primary data necessary to pursue the topic quantitatively. At the same time, criticism of ethnographic practice has arisen from new directions. Indeed from among the ethnographers themselves. They established a kind of post-modern ethnography, which abandoned both the claim that 'reality' could be accurately represented ethnographically and the so-called criteria by which ethnography's truth claims could be assessed. However, post post-modern ethnography, unquestionably rescues it from the uncertainty of post-modernism and seeks to ground good practice of the method in a positive methodological foundation. The post post-modern ethnography criteria consists of 'subtle realism', 'analytical realism', 'critical realism or 'ethnographic imagination' all of which are a combination of naturalist-like realism and post-modernism. The post post-modern type of ethnography supports the possibility and desirability of systematic ethnography. ...read more.