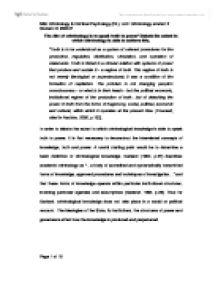 The Aim of Criminology is to Speak Truth to Power

The Aim of criminology is to speak truth to power' Debate the extent to which criminology is able to achieve this. "Truth is to be understood as a system of ordered procedures for the production, regulation, distribution, circulation, and operation of statements. Truth is linked in a circular relation with systems of power that produce and sustain it - a regime of truth. This regime of truth is not merely ideological or superstructural; it was a condition of the formation of capitalism. The problem is not changing people's consciousness - or what is in their heads - but the political economic, institutional regime of the production of truth...but of detaching the power of truth from the forms of hegemony, social, political, economic and cultural, within which it operates at the present time. (Foucault, cited in Faubion, 2000, p.132). In order to debate the extent to which criminological knowledge is able to speak truth to power, it is first necessary to deconstruct the interrelated concepts of knowledge, truth and power. A useful starting point would be to determine a basic definition of criminological knowledge. Garland (1994, p.27) describes academic criminology as "...a body of accredited and systematically transmitted forms of knowledge, approved procedures and techniques of investigation..." and that these forms of knowledge operate within particular institutional structures, involving particular agendas and assumptions (Garland, 1994, p.25). Thus for Garland, criminological knowledge does not take place in a social or political vacuum. The ideologies of the State, its institutions, the structures of power and governance affect how the knowledge is produced and perpetuated. It follows that 'power' is generally exercised by those institutions with knowledge. This includes, but is not exclusive to, the power of the State to regulate social life and behaviour. Foucault's analysis has offered criminology a tool to examine the relationship between power and knowledge. For Foucault, power and knowledge are inseparable. ...read more.

When the State loses control of the class consensus through the loss of the traditional measures of power, reverence and external enemies, as it did during the British economic decline in the 1970's and 1980's then the State resorts to focusing on the internal enemies. In this 'crisis of hegemony' the State needs to exercise its power and control, but it can't do this without winning over the consensus of its constituents. Thus, through the media, the black mugger, the rampant trade unionist, and the welfare dependent scroungers are demonised as the internal enemy. The media becomes the vehicle in which the ideological hegemony is perpetuated. The war on crime is then legitimised (Downes & Rock, 2003, p.269). This illustrates that criminology is a powerful tool that has the ability to challenge the political and ideological agendas of the State. By offering knowledge that resists dominant forms of truth criminology is able to critique injustices based on political motivations. Criminology has the ability to 'detach the power of truth from forms of hegemony... within which it operates' (Foucault cited in Faubion, 2000. p. 132). The legacy of radical criminology has meant a critical genre that has a basis in reflexology and attempts to deconstruct the meaning of crime has been able to flourish. Critical reflection attempts to explain the emergent ideologies by connecting the criminological knowledge with social and political theory. However critical criminology has not been without its critics. It was heavily criticised because its sole purpose appeared as critique of the establishment. The scholars confined themselves to criticising positivism and functionalism. They were also criticised for focussing on exploitation and inequality. The impetus of critical criminology was to study the crimes of the powerful, white collar crimes and corporate crimes at the expense of neglecting the real social problems of which petty crimes have the greatest impact. As an academic enterprise, critical criminology's commitment was to a utopian and idealist social reform. ...read more.

Under these considerations criminology has an ethical and moral duty to speak truth to power. This essay began with a brief philosophical quote that highlights the nature of truth, power and knowledge and the complex ways in which it is tied to political economic and cultural hegemony. We highlighted ways in which, historically, criminology as discipline has always had an intimate relationship with politics and the wider social and cultural climate. We looked briefly at the radical and critical approaches that have a basis in reflexology. These critical genres are important as they present an alternative approach to the accepted realities of crime. They present an analysis of the construction and perpetuation of dominant ideologies. At the same time they can give a voice to those who were previously silenced. They represent a way in which criminology can speak truth to power. In the current economic neo-liberal climate with the emphasis on marketisation, consumerism, managerialism and accountability we looked at ways in which academic criminology is limited in the extent it is able to speak truth to power. With the increasing emphasis on consultancy based work universities that are starved of resources are finding it increasingly difficult to maintain political independence. Finally, criminology is an eclectic science drawing on vast areas of knowledge such as anthropology, psychology, psychiatry, medicine, economics and cultural studies and thus it draws on a number of academic disciplines. Therefore, criminology is a powerful body of knowledge that has the potential to challenge the existing power structures and forms of governance. It is capable of challenging the political agendas and ideologies which may not always be welcomed. Yet in order for criminology to speak truth to power it needs to engage in counter-hegemonic critical analysis that has the ability to counter the State defined research agendas. As Foucault notes at the beginning of this essay the task is "detaching the power of truth from the forms of hegemony, social, political, economic and cultural, within which it operates at the present time" (Foucault, cited in Faubion, 2000, p.132). ...read more.