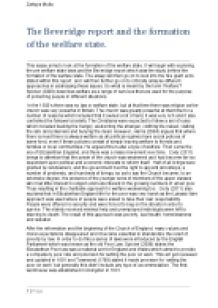 The Beveridge report and the formation of the Welfare State.

﻿Zakiyya Mulla The Beveridge report and the formation of the welfare state. ________________ This essay aims to look at the formation of the welfare state. It will begin with exploring the pre welfare state laws and the Beveridge report which was the study behind the formation of the welfare state. The essay will then go on to look into the five giant evils stated within this report and will then further go on to critically analyse different approaches in addressing these issues. So what is meant by the term ?Welfare?? Spicker (2008) describes welfare as a range of services that are used for the purpose of protecting people in different situations. In the 1500?s there was no law or welfare state, but at that time there was religion as the church was very powerful in Britain. The church was greatly powerful at that time for a number of reasons which included that it owned a lot of land, it was very rich and it also controlled the follower?s beliefs. The Christians were expected to follow a set of rules which included feeding the hungry, welcoming the stranger, clothing the naked, visiting the sick and prisoners and burying the dead. However, Harris (2004) argues that where there is need there is always welfare as all political regimes have social policies of some kind, even if these policies consist of simply leaving welfare to friends and families or local communities. He argues this is also a type of welfare. Then came the era of Elizabethan England, and there was a mass movement over time. ...read more.

Despite Churchill?s popularity, by 1945 the people no longer wanted a war leader and Labour pledges were based on Beveridge?s report promising a welfare safety net for all the people. In his report Beveridge set out a plan to put an end to what he identified as the ?five giants? ? Want (poverty), Disease, Ignorance, Squalor and Idleness (unemployment). His main idea was a state-run system of compulsory insurance. Every worker, by contributing to a scheme of national insurance deducted through the monthly wages, would be aiding to build up a fund that would pay weekly benefits to the sick, unemployed or who suffered industrial injury. The scheme would also include pension payments at the age of retirement. (Beveridge, J 1954). Jacobs (1992) explains that the idea behind this was to support the worker and his family. Benefits were to be set at a level that enabled a man, and his family to survive so they would be no reason for anyone to be in poverty. Powell and Hewitt (2002) say that Beveridge promised nothing less than freedom from want from the cradle to grave by suggesting that all workers pay contribution in a social insurance scheme and the receive certain benefits in times of need. Harris (2004) points out that many of Beveridge?s ideas affected the development of British social policy for approximately a whole generation after 1945. Jacobs (1992) suggests that the Beveridge report was a plan for a better system of social security. A great part of the Beveridge report was not about the actual goals but the administration that would be required. ...read more.

The outcome of this is believed to be social justice and rewarding talent rather than power and privilege. As well as this it helps the society in becoming more competent to avoid wasting the talents of its citizens, and as society becomes more incorporated social conflict is avoided. This way all people can support a great fair system. In mid-1990?s the Labour government came into power again, by then many things in the society had changed and so came the emergence of New Labour . Alcock (2008) states that the slogan ? what counts is what works? aims to capture New Labour politics and policy. The ?Third Way? is the term often used to refer to New Labour?s ideology. This was a policy between the views of Old Labour and Conservative, finding a successful in between. Though having said that, this view claims to be committed to basic Labourist values, but with a change in the means of applying them. The main aim of this ideology is a hyphenated society and that every individual has a role and responsibilities. the main belief behind this view is inclusion, welfare should be positive for people but at the same time encourage them to work and participate in society. In conclusion it can be seen that the welfare state continues to develop despite many changes in ideology. Whilst the left and right approaches are binary opposites in their ideology and approach to inequality both agree that this is a social issue that needs be addressed. The third way attempts to take the best of both left and right views to create a in between theory, which proves to be more successful theoretically. ...read more.